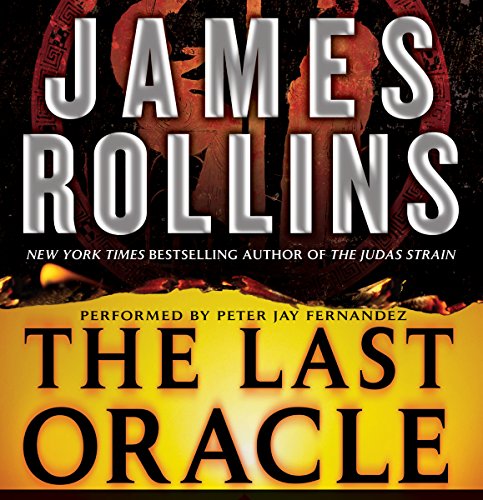 What if you could bioengineer the next great world prophet: scientifically produce the next Buddha, the next Muhammad, or the next Jesus? Would it mark the Second Coming or initiate a chain reaction with disastrous consequences?

In Washington, D.C., a homeless man dies in Commander Gray Pierce's arms, shot by an assassin's bullet. But the death leaves behind a greater mystery: a bloody coin found clutched in the dead man's hand, an ancient relic that can be traced back to the Greek Oracle of Delphi. As ruthless hunters search for the stolen artifact, Gray Pierce discovers that the coin is the key to unlocking a plot that dates back to the Cold War and threatens the very foundation of humanity.

An international think tank of scientists known as the Jasons has discovered a way to bioengineer autistic children who show savant talents - mathematical geniuses, statistical masterminds, brilliant conceptual artists - into something far greater and far more frightening, in hopes of creating a world prophet for the new millennium, one to be manipulated to create a new era of global peace . . . a peace on their own terms.

Halfway around the world, a man wakes up in a hospital bed with no memory of who he is, knowing only that he's a prisoner in a subterranean research facility. With the help of three unusual children, he makes his escape across a mountainous and radioactive countryside, pursued by savage hunters bred in the same laboratory. But his goal is not escape, nor even survival. In order to thwart a plot to wipe out a quarter of the world's population, he must sacrifice all, even the children who rescued him.

From ancient Greek temples to glittering mausoleums, from the slums of India to the toxic ruins of Russia, two men must race against time to solve a mystery that dates back to the first famous oracle of history - the Greek Oracle of Delphi.

But one question remains: Will the past be enough to save the future?

What listeners say about The Last Oracle

Maybe an OK book if you like the word 'feral'

I listen to a lot of books, but have never been inclined to write a review. The title of my review is joking but true. the author seems to love the word feral, and uses it many many times in this book..way overcooked. While that doesnt make a book a bad read, I'm really not enjoying this book. It is one of those books that jumps around between locations, has several main characters, but none of the characters are developed so there is a serious disconnect from the character. Most of the book is comprised of escape scenes...

when is more really more

What made the experience of listening to The Last Oracle the most enjoyable?

I like the series and the narration is great

What about Peter Jay Fernandez’s performance did you like?

His emotion while reading draws you into the scene, and paints it beautifully

the oracle of now

enjoyed it and glad Monk is back!

Would you listen to The Last Oracle again? Why?

Yes. It was a good thrilling book. I probably missed some details the first time

What other book might you compare The Last Oracle to and why?

Any other sigma force book

Which character – as performed by Peter Jay Fernandez – was your favorite?

James Rollins books are always a Great Escape...they take you on an incredible journey as well as always a thrilling ride featuring a time crunching escape. There is always a puzzle and The Last Oracle has yet another thrilling puzzle and continuous chase. I appreciate the characters who are strong and yet have flaws. I have read or listened to all his books and each time I am taken with the BOND-ESQUE, DaVinci Code style adventure. OKay so some is totally unrealistic, but Rollins makes it imaginative. Also the narrator is SUPERB, changes voices and accents easily, a pleasure to absord and listen too.

I enjoyed the fast pace and the characters, but the story didn't hold my attention like I'd hoped it would. I suspect that starting the series from the beginning would have been a huge help here. I recommend starting with the first book if you want to give this series a try.

Great combination of science and fiction, fun story to listen to, excited for the next book.

Can I get the audible without the dramatic music??

The dramatic music at the beginning of each chapter was very distracting and annoying. It was hard to hear the narrative over the instrumental music. It took away from the experience for me and didn’t flow well with the chapter openings. The drums and music should not drown out the spoken words. Other than that, I really enjoyed this book.

1 Star is way too generous

Three Problems with this book.

1) Bad Writing. James Rollins tries to write a Clive Cussler-type novel, but because this book is so poorly written it makes Cussler read like Hemingway. The only character that seemed real was the monkey; the rest were so contrived it was embarrassing. Rollins needs to study real conversation between real people and write dialog that matches it. The dialog in this novel was straight out of the Batman TV series.

2) The narrator didn't help. His "voices" were right out of Rocky and Bullwinkle and I found them irritating. I have listened to biographies that were more exciting to listen to than this. This narrator is better suited to nonfiction and should avoid novels. I do not mean this as an insult.

3) I am amazed that a publisher thought that this material was good enough to publish. Not just good, but so good it should be an audiobook. So good, in fact, that it should have cheesy music play between random chapters to add drama.

After 13 hours, just one hour before the climactic ending, I finally couldn't take any more and stopped listening. They finally wore me down and I just didn't care anymore.

If you like a book that will continually insult your intelligence then this is the book for you.

Not a fan of the musical interludes, fact ck?

First, I enjoy the author and storylines but the mistakes I see lead me to question what I’m not familiar with. As a prior USAF helicopter mechanic I noticed all the choppers in these books have skids, while in fact few modules mentioned have skids, large helicopters have landing gear like a fixed wing aircraft. Second maybe I missed something but why was Commander Pierce in the Army Rangers? Commander is a navel rank. Poor why saves the world every week and never gets promoted ?

Please do not add this music to the next book. It was unnecessary and annoying! This whole series so far has been very entertaining. Hopefully it will continue to be enjoyable sans music.