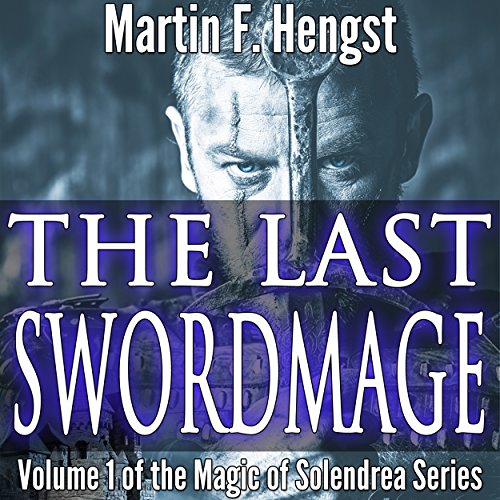 As far as bad luck goes, Tiadaria's has been the stuff of legend. After being sold into slavery by her father and accused of a murder she didn't commit, she finds herself facing the executioner. The only thing standing between her neck and the sharp edge of the axe is the village Constable.

After thirty years of loyal service to the Imperium, Royce has retired to King's Reach as the village's Constable. He thought that the frontier town would be the perfect place to rest, relax, and die in peace. He was wrong. With a crooked Magistrate on one hand, and a conniving slaver on the other, things are anything but peaceful. To complicate his life even further, the slave with her neck on the block seems to possess the same magic Royce has hidden all his life.

Paying off Tiadaria's bond, Royce takes possession of a slave in a land where slavery is verboten. Now he must teach her to trust him, teach her to fight, and teach her about her unique abilities before they both run out of time....

An ancient menace is coming. The Xarundi have returned. They are the most dangerous enemy humanity has ever faced, and they have a thousand years of bloodthirsty vengeance to exact.

What listeners say about The Last Swordmage

Great beginning - Planning to read the next book!

I actually got this book simply because of the narrator, Alexander Edward Trefelhen. He also narrated the Changling Blood series by Glynn Stewart and I really like how he uses his voice to bring the characters to life. He did a great job in the Last Swordmage, too, and I enjoyed the story enough to continue reading this series. I've never picked up a book just because of the narrator before, but in this case is was great -- now I have a new series to enjoy!

Not a good adaptation by the narrator.

The narrator's drawl is irritating . The book would be so much better with a voice like Tim Gerald Renolds. The story is really captivating. Just wish a better choice of narration had been employed.

The storyline had potential but it was....lacking something. I won't be reading the next story because it seems the same enemy returns in the next book. I was hoping T had a small romantic storyline.

I really wanted to live this book. It had some good concepts, but the actions of the characters often made no sense based on what happened in the previous chapter! For example, the main character lets a group of slave girls beat the snot out of her without offering any resistance or so much as a block and then the next chapter, the slaver is getting rid of her for being a hellcat who’s too much trouble!

The author makes a huge point about how slave collars can’t be removed and how much the main character hates being a collared slave and then the next chapter presents a way to remove it which she declines. It made no sense to make such a big deal out of what it meant to be a slave if you were just about to negate it! I couldn’t take it anymore and stopped listening just an hour shy of the end of the book. Very disappointing.

This is a great book and I'm excited to read the second one. maybe i should say listen.

Not sure if the story is any good. i couldn't get past the first 5 minutes of narration.

I couldn't even listen to the end. the story didn't catch my imagination and the performance was sadly lacking.

So so story ruined by a sub par narrator

Would you try another book from Martin Hengst and/or Alexander Edward Trefethen?

The story itself was okay. Nothing superior. I found it originally as a Kindle Unlimited offering. I liked it well enough, and decided to pick up the audio book at the discounted price. Boy was that a mistake. Talk about a horrible narration.

Would you be willing to try another one of Alexander Edward Trefethen’s performances?

Definitely not. I can't believe this guy gets paid to be a professional narrator. Overly dramatic for the sake of dramatic. I finally gave up and went back to the paper version.

I doubt it could stand up to that.