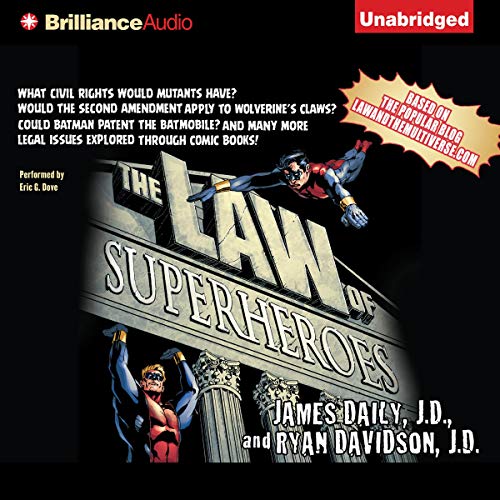 The Law of Superheroes

Could Superman sue if someone exposed his identity as Clark Kent? Is a life sentence for an immortal like Apocalypse "cruel and unusual punishment"? Is X-ray vision a violation of search and seizure laws? Is the Joker legally insane? And who foots the bill when a hero destroys a skyscraper or two while defending Metropolis? Fear not, gentle listener! The answers to these questions and a multitude more are contained inside this audiobook.

Lawyers by day and comic book enthusiasts by night, James Daily, J.D., and    Ryan Davidson, J.D., explain and explore the hypothetical legal ramifications of comic book tropes, characters, and powers, down to the most deliciously trivial detail. You’ll learn about the basic principles of law in an engaging and accessible way through comics - from alternate universes and copyright laws to shape-shifters and witness testimony to contracts with the Devil. The Law of Superheroes is a must-listen for legal experts, true believers, and anyone who is ever called upon to practice law in the comic multiverse.

What listeners say about The Law of Superheroes

Legal Pedantry Has Never Been This Much Fun

Comic book fans will be well acquainted with the setup for this book. Imagine a discussion over the latest issue of Batman where the Joker is captured and remanded back into custody at Arkham Asylum because he's legally insane, and therefore incapable of standing trial. Or perhaps there is an argument over gift taxes regarding the diamond that Superman shaped and gave to Lana Lang in Superman III. Exactly who's liable for the mission that turned the Fantastic Four into superpowered heroes and the Hulk into a living engine of destruction? Perhaps we should talk about insurance and the swaths of disaster cut by the average superbattle? And just how far can the Mutant Registration Act or similar such laws extend? For non-fans, it sounds ridiculous, and there are even some fans who will claim as much and still get sucked into such discussion, but for the rest of us (and we all know who we are), this book is a veritable gold mine.

The authors of this book are lawyers and self-described comic book geeks who bring their legal minds to questions that I have heard since the moment I first encountered other fans... and admittedly some of them were asked by me. Geeks love trivia, and in the comics world, the more pedantic the trivia, the better it gets. This book is 100% legal pedantry, wherein many, many, MANY examples of comic book conduct crosses into the real world. Dare I say it, this might be the most awesome way to learn about the U.S. legal system. Stuff like this is what makes geeks seem smart when they unleash their newfound knowledge upon their unsuspecting audiences. After all, knowledge is power, and with great power comes great responsibility (yes, I had to say it) to crush the ego of that one unrelenting know-it-all that every fan knows. Incidentally, if you don't instantly know who that is in your group... it's probably you.

I won't say that this book is all-encompassing, but I think anyone would be hard-pressed to figure out what might have been left out. Go for it, my fellow geeks, and get back to me on this one. I'll also say that there are a couple of points where I'm wondering if the authors actually read the comic they reference because, well, I'm a geek, and I spot these things where the story in question is much beloved. But for the most part, they do a great job, and for those interested in further reading, the actual case reference numbers are there for you to look up.

The narrator for the audio version does a good job as well, but again, I'm a geek, so I'm going to just call this outright. Ra's al Ghul is not pronounced as it is in the Dark Knight movies. For 30 years before Nolan ever got there, the name has a long A sound and the corresponding punctuation in the comics to prove it. Reference Batman: The Animated series to get it right. Also, other pronunciations such as J'Onn J'Onnz and Xavier are called into question. If you can let these slide without nerd rage, then this narrator will work well for you.

One last thing I'll point out, because I can. Nearly everyone I talk to in the past couple of decades seems to think that ultra-realism is better than merely having fun when it comes to superhero stories. After this book, you might be rethinking your stance on that. Pretty much every character you can name would be required to go back to the drawing board or spend life behind bars. Yes, even Superman. Maybe not Wonder Woman or Aquaman, assuming they have diplomatic immunity, but probably international wars would be inevitable. Eh, you get the idea. Get this book, and prepare to have your mind blown.

This audiobook starts a bit weak, but then improves in an impressive way. If you're interested in what legal issues superheroes (and supervillains) have to worry about, this book is for you. A bundle of fun.

Superheroes and the U.S. Constitution!

This book answers that nagging question, "could Batman really help the police make a case to send the Joker to jail the asylum?" If you like police procedural dramas, this brings that step-by-step process into the realm of the comic book world. I loved it!

What other book might you compare The Law of Superheroes to and why?

The only one that I'm familiar with that comes even close is The Common Law by Oliver Wendall Holmes.

The explanation of estate transfer and the problems it entails for true immortals.

If you could give The Law of Superheroes a new subtitle, what would it be?

Comic Books and the Common Law

While it is presented as a very dry explanation of the legal system as it would pertain to superheroes, (and lets face it, that *is* a dry subject), I found it to be anything but boring. I'm not a lawyer or have any connection with the legal system, but this book answers some small, nagging questions I've always had about superheroes in the 20+ years I've been reading comic books. The biggest question being, "how can xxx get away with that in real life?" If you've ever asked that question about any legal matters in comic books, it is answered here. A fantastic book.

The whole thing is not ordered properly…

Chapter 2 is labeled Chapter 6 in the app… as a consequence you have no idea where you are, trying to navigate this book — certainly an issue when you consider this is a book where note taking is almost mandatory. I’ve never seen this in an audible book before, but it completely marred my whole listening experience.

comic book geek here, I wanted to like this book

I really wanted to like this book. If you are into listening to dry facts about the the law with the names of superheroes tossed in and there. Then you will enjoy it. I did not. I did not even finish the book...

Fantastic use of superheroes​ to explain common law. Author takes time to explain both the letter of the law and how it could apply to superheroes in various situations. Citations everywhere if you want to look any of the case history up.