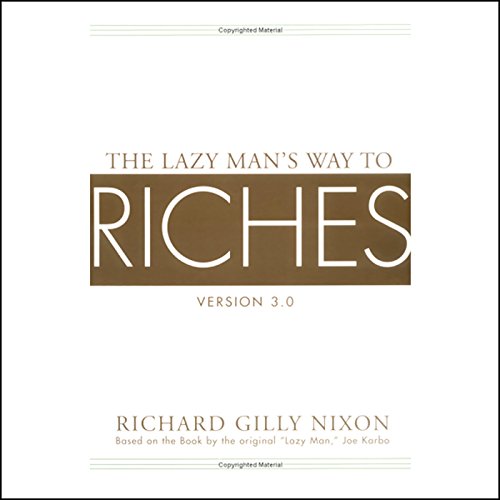 The Lazy Man's Way to Riches

Based on the classic teachings and philosophy of the original "Lazy Man," the late Joe Karbo, and continuously updated by Richard G. Nixon, The Lazy Man¿s Way to Riches has helped millions of people over the last three decades become more successful both personally and professionally.

This special 30th Anniversary Edition of The Lazy Man's Way to Riches still contains all of the hard-won knowledge that made the original "Lazy Man" successful, both personally and professionally, but it also includes new material on just about every subject contained in the first edition, as well as important information you need to succeed in today's digital age.

"Want to get rich? Take my advice and follow his." (Seattle Times)

What listeners say about The Lazy Man's Way to Riches

The audiobook is well-read and has some interesting insights, nothing staggering, but it constantly refers to the "downloadable workbook" and other online features which simply DO NOT EXIST. The website (www.thelazymansway.com) has been abandoned and the publisher disavows all knowledge. Read the reviews of the print version at Amazon before spending your money or your credits.

enjoyed listening to this book.
If it included social media, it would be up to date...

This is a book about a work book written by the author. The author has written this book for a person whom has not yet completed the 5th grade.

There is nothing new here.