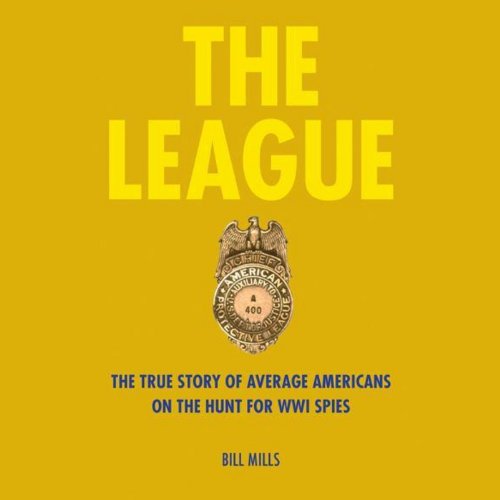 Bill Mills chronicles the formation of the American Protective League, a group of ordinary American citizens who organized to prevent espionage during World War I. This true story is presented with great narrative verve and an almost pulpy style that is augmented by Eric Martin's vibrant performance. Martin affects a noir-ish demeanor that calls to mind a hard-nosed detective in an old black-and-white film, making it an appropriate performative choice for this enthralling look at the thousands of Americans who enacted their own undercover work in order to keep their country safe.

The amazing true story of the national paranoia that turned US citizens into volunteer detectives.

Two weeks before the U.S. entered World War I, a Chicago advertising executive visited the Department of Justice with a proposal - organize the country’s businessmen into a secret force of volunteer agents to ferret out and investigate enemy activities within the United States. The country, overcome by a wave of patriotic fervor, had also become gripped with fear and uncertainty of the influx of immigrants from the very countries with which the country was now at war.

The idea received quick approval and caught on like wildfire. Soon thousands of volunteers in every major industry, trade, and profession were on the alert nationwide, maintaining surveillance and investigating cases for the Department of Justice Bureau of Investigation. They would grow to become 250,000 strong.

Written as a real-life adventure story, The League reveals how the organization began, the manner in which it operated, and the varied missions that it performed on behalf of the U.S. government. It is an extraordinary chapter in American history, when almost any citizen could receive official credentials as a volunteer investigator. From a running gun battle on the streets of Philadelphia, to the seizure of a disguised German commerce raider on the high seas, to the hunt for the radical bomber that attacked the Federal Building in Chicago, The League is a fascinating true story that will not soon be forgotten.

What listeners say about The League

In all my readings over the past 2 years about World War 1, I had not come across The American Protective league. It was started in 1914 by A.M. Briggs a well-known Chicago Ad executive. at its height, in 1917, the League had 250,000 dues paying members. The League was an Auxiliary of the Dept. Of Justice. Attorney General Thomas Gregory approved them as an Auxiliary of the Bureau of Investigation. The BI had less than 200 men, few automobiles, they used public transportation to get around. The first thing Briggs did was organize the business men in Chicago and New York to donated some autos to the BI and obtain volunteer who had cars to drive the agents around. The unpaid auxiliary was assigned jobs by the DOJ, BI, military intelligent, local police, and various other government agencies. Bill Mills states that in 1914 and all through the War, American munitions plants were sabotaged and blown up as were other industries providing Britain with supplies. The League was to help hunt for the saboteurs. Mills states that J .Edgar Hoover was head of the Department of Food and Fuel regulations enforcement and he was one of the biggest user of the League making sure people adhered to the restriction. Mills also states that when the F.B.I was formed and Hoover but in charge, he would not officially restart up the League, but he used it as a group of unpaid informants. Mills states by the time the League was disbanded in 1919 after the war they had performed 75% of all investigation by the B.I. such as background check for security clearance, investigation of German Americans, also did undercover investigation, following people and checking out rumors. They also did general assistance of local police acting as a police reserve. Bill Mills provides a positive attitude toward the League and it's work but I can envision at number of problems having a group of unpaid, untrained people with some possibly being zealots.. It is interesting that the group was totally disbanded in 1919 and not used in WWII or in the Cold War. Mills gives some individually stories of spies caught also some smugglers and con men. Over all it is an interesting piece of history that I was totally unaware of. Eric Martin does a good job narrating the story. Anyone interested in history will enjoy this book.

Forgotten history of US home front during WW1

Shadowy corners, betrayals, suspicions, arson, bombing, average citizens uncovering spy rings. The League is an uncovering of an amazing and rather shocking true story of a well-orchestrated and defined group of a huge number of everyday neighbors and co-workers who formed the all-volunteer American Protection League to watch, listen, and report up the ladder any seditious or suspicious words or activities that might indicate an undermining of the Allied powers during WW1. The extent to which our constitutional rights were violated is rather shocking, all in a sincere effort to protect the world, the nation, our allies, and eventually "our boys overseas" - and to assure that we didn't fail. The costs were high both of complacency and diligence. This book will make even those who roll their eyes at conspiracy theories pause to catch their breath. As in most documentaries, there is an abundance of dull statistics and logistics, but if the reader doesn't get caught up in that, allowing it to paint the background, it does give scope to the story. This trivia is punctuated by stories and plots enough to make it worth it, especially since it is a part of history generally forgotten, overlooked by most historians, no doubt new to the reader. The narrator is droll, monotonous, but with a subtle suspense in his voice. He sounds stunningly like the man who introduced the mid-century tv drama Dragnet. He was perfect for this book. Excuse me now. I need to go see if there's a man in a trenchcoat and a fedora lounging near the streetlamp, looking this way as he lights his cigarette in the fog.