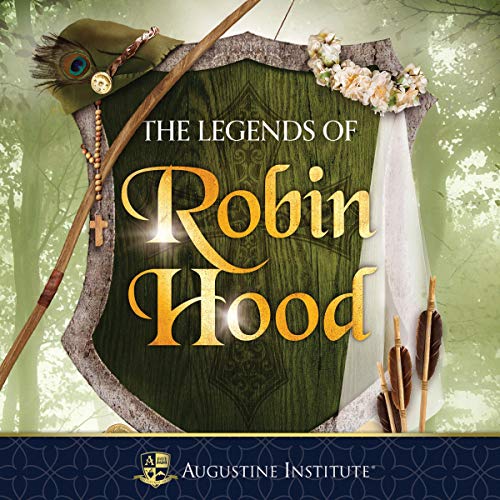 The Legends of Robin Hood

How do you fight for justice when the laws are unjust?

Where are the lines between a righteous cause and hate-filled revenge?

The child of a reputable family and a faithful son of the Church, Robert of Locksley had no intention of becoming an outlaw. But the relentless cruelty and tyranny by the elite nobility of England demanded that someone rise up to give answer. And so Robert of Locksley became Robin Hood, a man thrown into a fierce struggle to balance his deep faith with a call to action in a violent age. Featuring over 60 actors, cinematic sound, and original music, The Legends of Robin Hood is an exciting 12-part audio drama from the award-winning Augustine Institute. Bold and inspiring, the Augustine Institute's audio dramas take storytelling to a whole new level of sound that quickens the imagination and inspires the heart.

What listeners say about The Legends of Robin Hood

Best audio drama of robin ive ever heard. So well written! You could see it in your mind.

Great for all ages

This was a really impressive production that I downloaded for my kids 8 & 5. They thought it was great, as did my husband whenever he got to listen. Very high production value and engaging story for both kids and adults. Some rather intense sequences, but overall an exciting listen. I loved how they incorporated the Catholic faith throughout.

My children and I loved every minute of this audio book! We 100% recommend listening to it.

My girlfriend and I listened to this together over the summer, we thoroughly enjoyed it!

Each of the audio productions released by the Augustine Institute have been remarkable. Wonderfully produced and acted. Great stories!

Good book for children from ages maybe 7 or 8. There's fighting very little of detailed scenes. No vulgar language that I could tell. No improper conduct or romantic intamacy in the book. Love how Robin wants to have religion in company and wants help through the will of God.

Very well-made story awesome acting a great sound effects explanation point would definitely recommend for any family to listen to !!

A truly excellent production! The tale is of course well known, more or less, but never better told. Thank you for a wonderful few hours. Absolutely delightful!

This audio was amazing! I was hooked from the very beginning! You will totally get drawn in, and not want to stop till it is over, and then you want it to not be over!! I recommend this to EVERYONE! Awesome action, great dramatizations!

Very enjoyable. A bit grittier than than their other productions, but a swashbuckling faith centered adventure that has lessons for today.