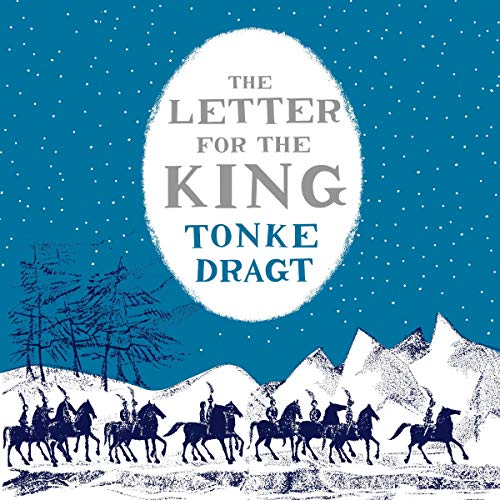 The Letter for the King

Soon to be a Netflix original series.

A young messenger. A secret mission. A kingdom in peril.

It is the dead of night. Sixteen-year-old Tiuri must spend hours locked in a chapel in silent contemplation if he is to be knighted the next day. But, as he waits by the light of a flickering candle, he hears a knock at the door and a voice desperately asking for help. A secret letter must be delivered to King Unauwen across the Great Mountains - a letter upon which the fate of the entire kingdom depends. Tiuri has a vital role to play, one that might cost him his knighthood.

Tiuri's journey will take him through dark, menacing forests, across treacherous rivers, to sinister castles and strange cities. He will encounter evil enemies who would kill to get the letter, but also the best of friends in the most unexpected places. He must trust no one. He must keep his true identity secret. Above all, he must never reveal what is in the letter....

The Letter for the King is the thrilling story of one boy's battle against evil, set in an enchanted world of chivalry, courage, and true friendship.

What listeners say about The Letter for the King

Very different from the Netflix series.

My husband and I watched the recent series, which is very loosely based on this book. We enjoyed the TV series, although it was flawed. The book is so much better. I would have loved it as a kid if I had encountered it then. I highly recommend it. Great performance, too.

Everything an epic adventure should be!

Letter for the King and its sequel Secrets of the Wild Wood were among my favorite books when I was growing up. When I first read Letter for the King, I remember being so spellbound by the story that I secretly kept on reading all through the night. Tonke Dragt's vivid descriptions really make the characters and the scenes take on a life of their own, and what starts out as a simple request to deliver a letter quickly builds up to a truly epic adventure. I was delighted to see these books in the Audible store, and I knew I had to have them for my collection.

The narrator has a pleasant voice and does an excellent job of distinguishing between the different characters. Having just finished listening to Letter to the King I can honestly say that I enjoyed both the story and the performance immensely, and I will happily recommend this book to both young and adult readers. I know I will be getting the sequel as soon as I have a credit available!

This is a sweet book, written in the 1960s, and comes off as naive, and corny. The book has a "bygone era" vibe to it. It will appeal more to the young or young at heart. The Netflix series is nothing like the book, except the sharing of a few names. I loved this book and liked the Netflix series, but I am still confused why Netflix didn't make a film from this book and maybe have a related film based on the Netflix-written story.

The book and the show on Netflix are completely different aside from the names. I got the book after seeing the show, which I loved. The book is excellent too, great story!

This tale of a young knight to be on a dangerous quest is worthy to be compared with the best tales of King Arthur and his knights. I highly recommend it.

Addis did a fabulous job bringing this story to life. Such a great story for both boys and girls, with very little violence, and with good values. Great adult read too.