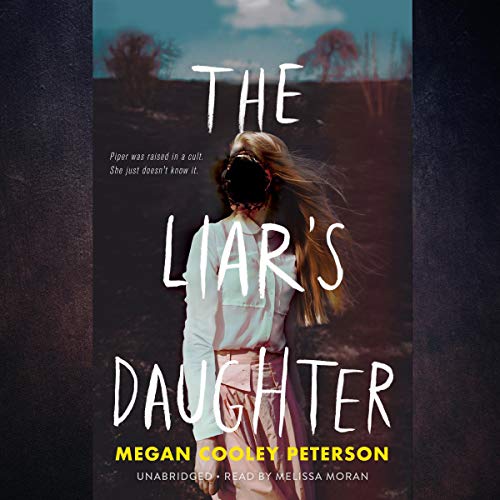 Piper was raised in a cult. She just doesn't know it.

Seventeen-year-old Piper knows that Father is a Prophet. Infallible. The chosen one.

Until the day he doesn't. Until the day the government raids the compound and separates Piper from her siblings, from Mother, from the Aunts, from all of Father's followers - even from Caspian, the boy she loves.

Now Piper is living Outside. Among Them.

But Piper knows better. And Piper is going to escape.

What listeners say about The Liar's Daughter

This was a truly amazing story that I didn't want to stop listening to. When I wasn't listening I was finding myself thinking about it. It seems very similar to the book The Family. Although this one is fiction. I highly recommend listening to this book.

Not a book I would choose but to my surprise I couldn't put it down once I came to know some of the characters. The psychology of cult followers and their leaders is very interesting... Great plot. The unraveling of the story was well paced and you're left with alot of material to chew on afterwards. The narrator was great!

I absolutely adored this book from start to finish. I would highly recommend it to anyone looking for an imersive view into the world of cults and the survival it takes to leave them behind.

You’d need to be a tween to enjoy this, but it seems to aimed at late teens or young adults. There is a lot of profanity, a really unnecessary, (striper jokes?) and so on. But besides that, its simply to long, even if the writing was better, it to LONG. The story doesn’t even start till the last three hours or less. And even when you finally get to it, it ends in a spoiler!!You BAIRLY know more at the end that you did at the start. You payed for and listened to this NINE hour disaster and you don’t even get an actual story out of it! It’s like those awful adds that Say if you watch to the end, you’ll learn the secret to losing weight overnight, and after that 50 minute advertisement to the end you learn that the secret is the authors $30 dollar book. All in all, don’t waste your time or money. You can do so much better for your teen or tween, and with your money and time.

I was not really sure where this story was going to go, but I ended up really enjoying it. If you love True Crime and different things like that, I think you will enjoy this one. There is a limited look into the cult life, but it was still very interesting since you know that things like this really happen. This story follows Piper before and after being in a cult. I found the parts with the story and the cult interesting. I also enjoyed the after parts as Piper starts to unravel everything that has happened in her life. This not a very detailed read, but you will find yourself wanting to know what happens next. It is unlike any other thing I have read. Overall, this was surprised me and I really enjoyed it.

I listened to this YA novel on Audible yesterday and finished it on my commute today. It was recommended to me by a friend
It's the engaging story of a young teen's escape from a cult told in flashback,and mystery. The heartbreak of The main character Piper's PTSD and resulting mental illness is handled without stigma. Because he main character's journey through her breakdown is handled in a very authentic way; reading it could be incredibly helpful to a young person traveling through their own depression, anxiety, or angst. I found the author's descriptions of Piper's memory loss and disassociation to be so very accurate, and described poignantly. The book is good storytelling, but I recommend for two more important reasons- firstly, understanding mental illness and childhood trauma in a non-judgmental way; and secondly, encouraging free thought with self awareness.

Cult Living from the Eyes of a Child

The Liar's Daughter is a book about a young girl who grows up in a cult where the beating of women and children is expected, and young girls are forced into arranged marriages as teens. It would seem like one would feel sorry for the main character, however it's the life she knows. She is protective against her family and wants to keep it together and do what's right for her parents and siblings.

The book is a page turner as the listener feels outrage for the sake of the young girl who has to deal with situations that we know are wrong and unjust. The frailty of first world impressions experienced by a child is glaring and terrifying. The Liar's Daughter is true to life and extremely disturbing.

I was riveted right from the start, and it did not disappoint throughout. I will definitely recommend to all my friend.

I loved The Liar's Daughter, which kept me guessing till the end. It was a reminder of what happens when control and submission are at play - in both organizations and personal relationships.

So good! Just listen! You seriously won't regret it. A surprise gem of a book.

Highly entertaining and interesting story. A bit different of a category than what I normally choose, but overall enjoyable.

The narrator took a bit of getting used to, though. There were times when her voice sounded almost monotone or computer generated/synthetic. I was able to overlook this, though, because the plot was interesting.

I was not certain I would care for this book but was intrigued by the topic. The author handled it so very well. She helps to understand how people can be duped by such cult leaders as this. Incredible Reed. I highly recommend.

This book kept me close to Piper the entire time while I listened. The narrator was outstanding and kept me captivated. A great book.