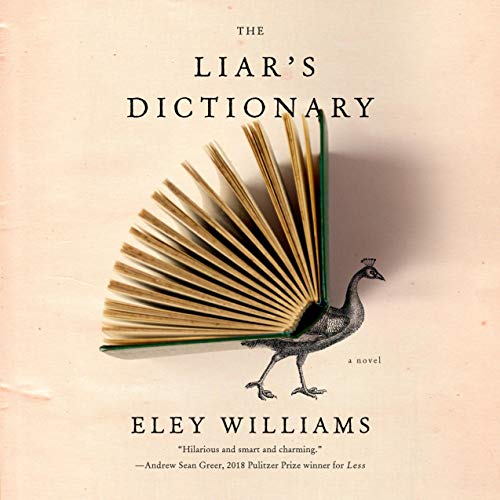 “You wouldn’t expect a comic novel about a dictionary to be a thriller too, but this one is. In fact, [it] is also a mystery, love story (two of them) and cliffhanging melodrama.” (The New York Times Book Review)

An exhilarating, clever, funny debut novel from a prize-winning talent, chronicling the misadventures of a lovelorn Victorian lexicographer and the young woman who decodes his trail of made-up words a century later. Will enthrall listeners of CS Richardson, Helen Simonson's Major Pettigrew and Eleanor Oliphant Is Completely Fine.

Mountweazel (n.), the phenomenon of false entries within dictionaries and works of reference. Often used as a safeguard against copyright infringement.

In the final year of the 19th century, Peter Winceworth is toiling away at the letter S for Swansby’s multivolume Encyclopaedic Dictionary. Increasingly uneasy that his colleagues are attempting to corral language and regiment facts, Winceworth feels compelled to assert some sense of individual purpose and artistic freedom, and begins inserting unauthorized, fictitious entries into the dictionary.

In the present day, Mallory, a young intern employed by the publisher, must uncover these mountweazels before the work is digitized for modern readers. Through the words and their definitions, she begins to sense their creator’s motivations, hopes and desires. More pressingly, she also has to contend with threatening phone calls from an anonymous caller. Is the change in the definition of marriage (n.) really that controversial? And does the caller truly intend for the Swansby’s staff to “burn in hell”?

As these two narratives combine, Winceworth and Mallory, separated by 100 years, must discover how to negotiate the complexities of the often untrustworthy, hoax-strewn and undefinable path we call life. An exhilarating and laugh-out-loud debut, The Liar’s Dictionary celebrates the rigidity, fragility, absurdity and joy of language while peering into questions of identity and finding one’s place in the world.

“The Liar’s Dictionary is the book I was longing for. So eudaemonical, so felicific and habile! A harlequinade of cachinnation! It's hilarious and smart and charming and I loved it. Read it. It’s the book you’re longing for.” (Andrew Sean Greer, 2018 Pulitzer Prize winner for Less)

“Infused with the essence of Wodehouse and Wilde, The Liar’s Dictionary is by turns madly eccentric, gracefully poignant, and laugh-out-loud funny. Eley Williams confirms her abilities as virtuoso wordsmith, offering an homage to the oddball-ishness of English (both the language and the nationality), as well as cautionary tales regarding, among other topics, the wrestling of pelicans and the ribald nature of certain museum statuary.” (CS Richardson, author of The End of the Alphabet)

"An improbably enchanting, rollicking novel about two generations of put-upon London lexicographers, The Liar's Dictionary is positively intoxicated with the joy and wonder of language, both authentic and, often hilariously, counterfeit, and I can assure you that it's quite the contact high. Eley Williams brings erudition and playfulness - and lovely sweetness - to every page." (Benjamin Dreyer, New York Times)

What listeners say about The Liar's Dictionary