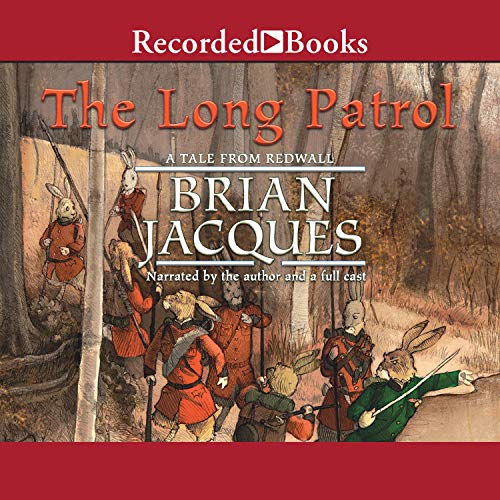 The vicious Rapscallion army is threatening to batter down the walls of Redwall Abbey. But standing in their way are the brave hares of the Long Patrol and a stout-hearted contingent of forest creatures. And no defender of Redwall is more courageous than young Tammo, an inexperienced but eager hare who dreams of great adventure. Fueled by sumptuous feasting and hearts lifted by stirring ballads, Tammo and his honorable companions raise their swords in a pitched battle for the future of their land.
©1997 Redwall Abbey Co Ltd (P)2007 Recorded Books
Animals Animal Fiction Fantasy & Magic
Show more Show less

"The medieval world of Redwall Abbey - where gallant mouse warriors triumph over evil invaders - has truly become the stuff of legend." ( Seattle Post-Intelligencer)

What listeners say about The Long Patrol

The reading is superb and the music is extremely well done. I’d have some of the songs on my iPhone

To preface, I love the Redwall series through and through, including Brian's narration. Now onto the review.

I heartily recommend avoiding the audiobook format for Redwall; at least with this one. Brian's an excellent narrator, however, the voice acting--which is as frequent as Brian's narration--is difficult to follow and makes me cringe at moments. The volume levels are uneven, so it will be difficult to hear one moment and nearly deafening the next. As much as I wanted to love it, and re-delve into Redwall, I found it impossible to push through. I do a lot of listening while driving and could not follow along with this.

Ultimately, it would've been leagues better with just Brian's narration and none of the voice acting. I don't need him to verbally act out each character. Yet there are no doubt people who will appreciate this phenomenal story and the eccentric voice acting (and no doubt there's a counterargument to be made that it should be eccentric).

What did you love best about The Long Patrol?

This is more audio drama than just reading of a book. Multiple actors and voices led even more interest to an already well written story. Although a "kids book", our whole family (including teenage boys) enjoyed this as we traveled.

I loved every moment of this book, the hares are my favorites and I love their accents

Amazing story and an amazing series!

This is an amazing story that is part of this wonderful series. What a treat it is to hear the story told by the author himself. This series is a treasure trove of wonderful adventure, fantasy and fun. I would recommend it for young and old alike!

My personal favorite of the series

Not everyone seems to think so, but this one is my favorite for the whole Redwall series. It covers a more serious theme than usual, keeps a lot of humor around it, and has some very heroic moments by different characters.

Another Fun Episode in the Redwall Series

Where does The Long Patrol rank among all the audiobooks you’ve listened to so far?

The Long Patrol was a fun story to listen to. It has a cast reading the various speaking roles as well as being narrated by the author. It was one of the better books I have listened to recently.

For long-time Redwall fans, this story involved characters from all areas of Mossflower: Hares, otters, shrews, Badgers, and Redwallers. It was a story of coming of age for the main character. It had adventure, celebrations, and the bad guys were really bad but buffoonish. It was later than Redwall in Redwall's timeline, but it had some aspects that went back to the Mossflower story, which was fun because it recalled that book for me.

Have you listened to any of Brian Jacques’s other performances before? How does this one compare?

This is about the 7th Brian Jacque's performance I have listened to. They are all good, and this one was as well.

The Long Patrol: A Coming of Age for a Young Hare

The Redwall books are clever. They are written in a style that is reminiscent of Tolkien, with virtuous heroes, clumsy villains, poems and songs.

I've never gave a poor review on audible, but I simply couldn't get through the book. The author is terrific,10/10, but the volume on the "voice actors" is all over the place. At times I'm turning the volume to max, to then have the audio way to loud. The voice actors don't sound dissimilar enough from each other and it the abrupt way the audio cuts between characters with inconsistent volume just kills the book for me.

If you can get through the volume issues, bad voice actors (looking at you guy who sounds like your recording in the hallway) then there are some gems here, some voice actors where fantastic, but overall it just sounds like no one listened to the book when it was finished.

I really loved this story. Redwall is not complicated by any means, but the characters are always interesting and the minor mysteries are fun to solve along with them.

That said, the production if this book could have been better. I truly enjoyed Brian Jacques as the narrator as well as the rest of the cast. But the places where characters start to sing or speak together are almost incomprehensible. This might be solved by having the book in front of you, but that kind of defeats the purpose of an audiobook.

great, but volume is all over the place

Wonderful performances and an old favorite book - but it was mumbles one minute and yelling the next. Bit of equalizing would go a long way!