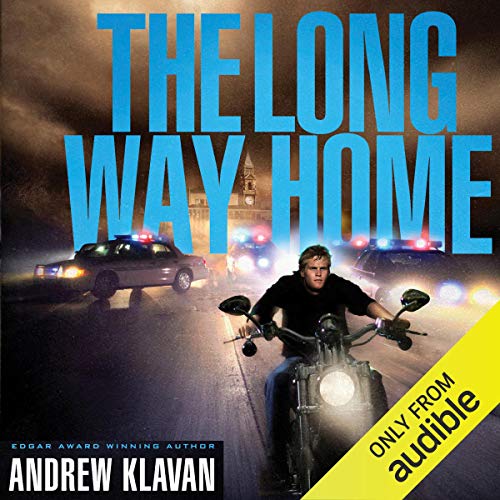 Written by: Andrew Klavan
Narrated by: Joshua Swanson
Try for $0.00

Sometimes you have to go home to find out who you really are.

Charlie West went to bed one night an ordinary high-school student. He woke up a hunted man. Terrorists are trying to kill him. The police want to arrest him for the stabbing death of his best friend. He doesn't know whose side he's on or who he can trust. With his pursuers closing in on every side, Charlie makes his way back to his hometown to find some answers.

There, holed up in an abandoned mansion, he's joined by his friends in a desperate attempt to discove rthe truth about a murder he can't remember - and the love he can never forget.

"[A]ction sequences that never let up, and showy set pieces (escaping a library, investigating a haunted house, even downloading software) that are wrung for every possible drop of nervous sweat. Best of all, unlike many second chapters, this one pays off with some seriously heavy revelations." (Booklist)

What listeners say about The Long Way Home

I'm so glad that this isn't a Christian romance series, rather a Christian fast paced action series. It's so refreshing to read a series devoid of sex, alcohol, drugs, & cursing.

I enjoyed this installment in the series; the characters are fun and the banter between the group of friends trying to help the main character, Charlie West, is entertaining. West's reflections on his situation are also great. I do wish more would get resolved in each book but they are engrossing in that things are constantly happening. Also, at the end of this one you do feel that the overall plot of this series is starting to take shape.

Andrew Klavan is a master thrill writer and his insights into the relationship between the human condition and eternal virtue makes his work first class!

Great sequel with more action and back story to make you care more about supporting roles.

It is a great series plus I love it so much I can stop reading the books my best friend is waiting
For me to finish it.

can't praise the narration enough. it added much thrill to the story and personality to all the characters.

I got through this one so fast I forget to rate it.
I love this series, highly recommend.
It is very suspenseful and it has a great wholesome storyline.

Good read for all. Warning, it will be hard to only read 1, but start at books #1