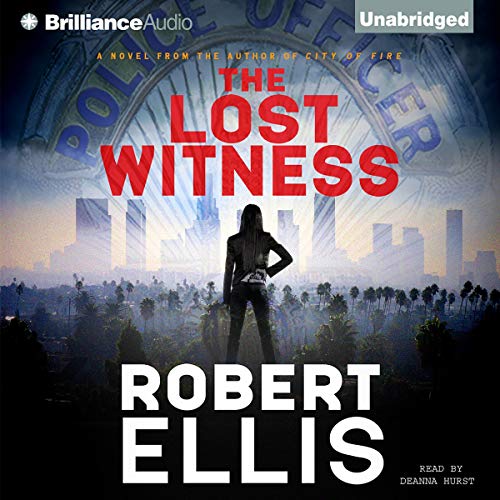 Written by: Robert Ellis
Narrated by: Deanna Hurst
Try for $0.00

Lena Gamble is an LAPD cop held in disgrace by department higher-ups for the explosive way her last case played out, though she's still hailed as a hero by her colleagues for catching the killer. For her punishment, she hasn't handled a real murder investigation in eight months.

When the chief finally tosses her a case, she's thrilled until she gets a look at the scene and realizes he's probably setting her up to be exiled once and for all: the victim is unidentified, and there are no witnesses, and no leads. Just the body, chopped into pieces and dropped in a Dumpster - gruesome enough to ensure that, once again, the media will be following Lena's every move.

What listeners say about The Lost Witness

Okay, I can recommend this as an entirely forgettable, but useful listen if you need something to distract your mind while tread-milling. Ellis is a commercial writer. He knows all about pace, narrative, story arcing... Yep, he's got all that stuff in his tool kit. But I really didn't much care about Lena Gamble's odd struggles with her superiors. Instead, I grumbled about another lazy writer who found contention in the old chestnut of inter office friction. But.. but... plot twisties overcame that objection and hid some of the endings predictability. Well, sorta....

Need a safe police procedural to fill a commute? The Lost Witness will do that, especially since Deanna Hurst SIZZLES as a narrator. She can do believable men's voices! I'll look for her name from now on.

This book's plot is not only boring but not believable. Not really worth the time or money; as a fan of Michael Connelly genre, this is NOT comparable.

One of the most intriguing, captivating books I have had the pleasure of listening to. Mr. Ellis has become a favorite author.

Ok mystery story, but the narrator was flat & stilted. Decent twists and turns. I muddled through it.

I have to say then ending was really good. The story lost my interest a few times. It's strange how Lena would be smart about some things and then sorta dumb on others for a cop. One thing I thought would be nice was inserting Mathew jones since she came from that story. Everything was the same where Matt was I think it was a different chief tho. Could be wrong. The reader sounds real robotic and that kinda bothered me but, I did enjoy the story on to the next

This was yet another gripping read from Ellis, replete with multiple twists and turns. Within a couple of chapters I was hooked. I could not recommend this book more strongly.. cannot wait to get started on the next one!

Loved this second in the Lena Gamble series. Good plot with lots
of twists and turns. Also good narrator with much expression.

This book kept me wanting more and there was always a little twist in the story to keep you guessing. Amazing!!!

This book was very mind blowing and the suspense was intense. This is a must buy and the ending was awesome

I choose this book because it was narrated by Deanna Hurst and the book sounded interesting. I'm so glad I did! Robert Ellis has a new fan. I was blown away by the way he formed an assassin into a facinating character you won't be able to forget. Lots of surprises in this book! I'm hoping for many more Lena Gamble novels.