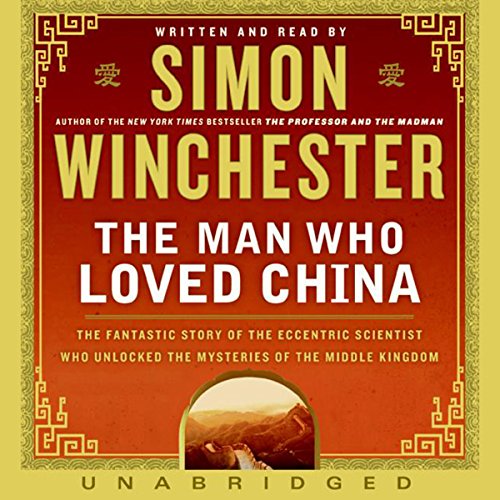 The Man Who Loved China

In sumptuous and illuminating detail, Simon Winchester, the best-selling author of The Professor and the Madman ("Elegant and scrupulous" - New York Times Book Review) and Krakatoa ("A mesmerizing page-turner" - Time) brings to life the extraordinary story of Joseph Needham, the brilliant Cambridge scientist who unlocked the most closely held secrets of China, long the world's most technologically advanced country.

No cloistered don, this tall, married Englishman was a freethinking intellectual, who practiced nudism and was devoted to a quirky brand of folk dancing. In 1937, while working as a biochemist at Cambridge University, he instantly fell in love with a visiting Chinese student, with whom he began a lifelong affair.

He soon became fascinated with China, and his mistress swiftly persuaded the ever-enthusiastic Needham to travel to her home country, where he embarked on a series of extraordinary expeditions to the farthest frontiers of this ancient empire. He searched everywhere for evidence to bolster his conviction that the Chinese were responsible for hundreds of mankind's most familiar innovations - including printing, the compass, explosives, suspension bridges, even toilet paper - often centuries before the rest of the world. His thrilling and dangerous journeys, vividly recreated by Winchester, took him across war-torn China to far-flung outposts, consolidating his deep admiration for the Chinese people.

After the war, Needham was determined to tell the world what he had discovered, and began writing his majestic Science and Civilisation in China, describing the country's long and astonishing history of invention and technology. By the time he died, he had produced, essentially single-handedly, 17 immense volumes, marking him as the greatest one-man encyclopedist ever.

Both epic and intimate, The Man Who Loved China tells the sweeping story of China through Needham's remarkable life. Here is an unforgettable tale of what makes men, nations, and, indeed, mankind itself great - related by one of the world's inimitable storytellers.

What listeners say about The Man Who Loved China

turn your watch back 70 years

Turn your watch back 70 years and let Simon Winchester guide your mind through Joseph Needman's life and times. Beyond his work in China, Winchester brings you up close to all of the unique and interesting aspects of Needam. Beyond the wonderful way Winchester writes, the English accent is just great.

This is my third Simon Winchester book and I enjoyed it immensely. However, if you've never read (listened) to a Simon Winchester book, this is not the one to start with. You will appreciate this book far more after listening to "The Professor and The Madman" because it will help you "get" the Winchester perspective on great works of scholarly importance and the characters in Madman are far more endearing than here.

This guy knows how to tell a story

This is not a topic I would normally have much interest in. I've never heard of Joseph Needham or the book he wrote. But Simon Winchester can make things interesting. It is the story of another eccentric Brit, not unlike the subjects of The Professor and the Madman or The Map that Changed the World. The format is straight biography, but there is an awful lot to learn about China in the story.

I guess the take home message is that China went into a slump for a few centuries while Europe managed to take over the world. Now China is regaining its place as a center of innovation and scholarship. How the future plays out is still open, but Needham made it clear that if the past is any guide, the West has a lot to worry about. A fun listen.

The UK and International title of this book is BOOK, BOMB, AND COMPASS, describing Francis Bacon's choice of three inventions which most greatly affected the history of mankind. All three were invented in China. For the US version the title of this book was changed to THE MAN WHO LOVED CHINA, and this is a much more apt title. It is a biography of Joseph Needham, not a summary of his work on the history of science in China.

Problem is I wanted to hear the latter, not the former. Only the first 1/3 of the book was interesting to me - his discovery of interest in China and his travels there. The rest about college life and cold war politics I could have skipped. Nevertheless, as an American living in China, it is humbling to hear about the early scholars who helped bridged the gap between China and the West with none of the modern aids we have today.

I would give this 10 stars if I could. I have read three other books by Winchester and was honestly rather disappointed with them. But in this work, he has exceeded all his other efforts put together. I was transported into Joseph Needham's world of Cambridge in the first half of the twentieth century. This brilliant man reached the pinnacle of achievement in science, languages, and history. After a remarkable career in biochemistry, he switched to the history of science in China in his late thirties. He not only mastered the Chinese language, but became the world authority on the history of science in China. He recognized that the Chinese were often far ahead of the rest of the world in science. His objective was to write "a" book about the topic, but it soon grew to some 17 major volumes that took 5 decades of his life to complete.
I relished every word of this wonderful work and can't imagine anyone who wouldn't be equally enthralled by this tale. An absolute winner.

The future is foreshadowed by the past.

This is a terrific book which all educated people should read to correct what they were taught. Teachers and historians need this information to pass on the truth. Government and business people need to know this information in order to deal in China. This is not to elevate China to some lofty level or to fear China. It is to understand China, deal with the Chinese people, understand them personally and how they will proceed in the future.

A Worthwhile Book About China

If you could sum up The Man Who Loved China in three words, what would they be?

A book about a book (though lengthy and multivolume, the Science and Civilisation of China remains a unitary work) about China through the lens of Joseph Needham. Eminently approachable for the western reader. Relatable as well, through the fusion of eros and logos in Needham.

What other book might you compare The Man Who Loved China to and why?

The Age of Wonder, Holmes.

Why did I waste my credit on this?

I love all types of books but just couldn't get into this one. The author couldn't decide if he wanted to write a good story or deliver a really boring lecture at a conference. I really wanted to like this because the topic is interesting but the delivery was disjointed and I found myself tuning out the book and thinking about other things. Don't spend your money; if you're curious, get it from the public library, rip it and be disappointed for free.

Perhaps a bit too much info on this man, who indeed had an interesting relationship over a long period with China. Still, I listened to the whole audio, so it is not too bad as I can be impatient. Good vocal performance. You can always send it back to Audible if you really dislike it. I kept it as I got enough enjoyment that I could not in good conscience return it.

Not his best work