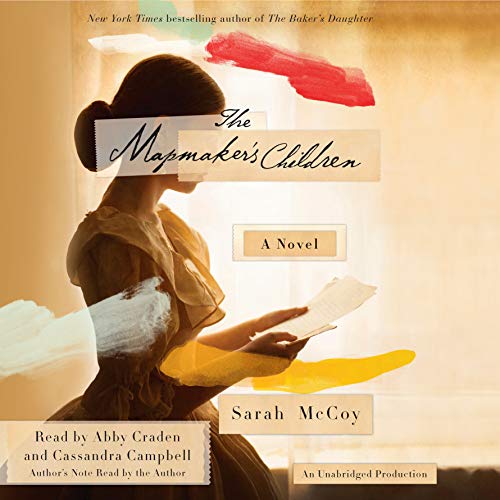 From The New York Times best-selling author of The Baker's Daughter and Marilla of Green Gables, a story of family, love, and courage

When Sarah Brown, daughter of abolitionist John Brown, realizes that her artistic talents may be able to help save the lives of slaves fleeing north, she becomes one of the Underground Railroad’s leading mapmakers, taking her cues from the slave code quilts and hiding her maps within her paintings. She boldly embraces this calling after being told the shocking news that she can’t bear children, but as the country steers toward bloody civil war, Sarah faces difficult sacrifices that could put all she loves in peril.

Eden, a modern woman desperate to conceive a child with her husband, moves to an old house in the suburbs and discovers a porcelain head hidden in the root cellar - the remains of an Underground Railroad doll with an extraordinary past of secret messages, danger, and deliverance.

Ingeniously plotted to a riveting end, Sarah and Eden’s woven lives connect the past to the present, forcing each of them to define courage, family, love, and legacy in a new way.

"The Mapmaker's Children is marked by rich, closely observed storytelling full of warmth and heart." (Charles Frazier, New York Times best-selling author of National Book Award winner Cold Mountain)
"I love the way this novel connects the past to the present. At first, these two heroines from different centuries seem to have little in common. But defining moments of bravery and resilience echo across generations for a truly satisfying story." (Laura Moriarty, New York Times best-selling author of The Chaperone)
"Poignant and deeply absorbing. McCoy weaves this moving tale of two women finding their way with style and thoughtfulness." (Madeline Miller, New York Times best-selling author of Orange Prize winner The Song of Achilles)
"Sarah McCoy has illuminated a forgotten corner of American history with her signature empathy and spirit." (Mary Doria Russell, author of Doc and Epitaph)
"Linking a contemporary woman named Eden with the daughter of abolitionist John Brown is a provocative idea, and McCoy has the skills to pull off something talk-worthy." (Library Journal, Hot Book Club Reads for Summer 2015)

What listeners say about The Mapmaker's Children

After reading The Baker's daughter, I decided to listen to another of Sarah McCoy's books. This is well crafted and touching, thought provoking and lovely.

Excellent In Every Way

This book was meticulously researched. The story line was very well put together in a way that made the reader feel invested in the characters well being. I felt their sorrows, their determination, and their love of one another. They had strength to not only make their own journey, but to help others in profound ways. This is a great book.

I liked the Sarah story. Didn’t like Eden at all. When I don’t like a main character, I have a hard time caring what happens to them. If the book had all been Sarah’s story I’d give it 5 stars. I failed to see similarities between the 2. Sarah—strong and kind despite extreme diversity; Eden selfish and mean because she couldn’t get what she wanted.

i still dislike the jumping between times but it worked in this story as you read about the Civil War and the current day family.

This author did her research and it is evident. Those details pull the reader in and begging for more. The narration further bring the characters to life. Well done!

this was a pretty interesting story...got better over time. the narration was overwrought, I thought. learned a bit about the underground railroad and John brown's daughter.

Good story, but not as good as The Baker’s Daughter

Seeing the past with dual focus

I read Sarah McCoy's "The Baker's Daughter" and enjoyed it immensely. I looked forward to this book ever since I heard it would be released this year.
Like The Baker's Daughter, The Mapmaker's Children straddles the past and the present. And, like the Baker's Daughter, this book's historical passages are much more riveting than its contemporary ones.
I enjoyed Sarah's experiences as a mapmaker, how she made presumptions and assumed things and fell on her face and fought for what she needed.
I could never wrap my head around Eden, the contemporary heroine, her singleminded determination for a child. And SO many characters were called Mr. and Ms. and I felt like I was in a children's story hour, which was disappointing for such a talented author.
All narrators were quite pleasant to listen to; though I wish a male narrator had been chosen to read letters from male characters, or newspaper articles and such... but that opinion is my own.

Overall, this book was an interesting way to pass the time. Sarah McCoy is a writer to watch, though I wish her contemporary characters would get out of the way so that her historical ones can shine through on their own.

Loved this story. I loved how the author wove so much of the true story in history into her work. The narrative I enjoyed as well. The back and forth from 1862 to 2014 was done smoothly and I was able to follow along without losing the depth and perspective of the characters she wove so well together. I actually found myself looking up things as it went. My daughter and son in law live in VA and I was picturing the places and changes in the story. Absolutely loved the author including her inspiration on her journey of her creation. Will look for more of her books. Love the style and richness of her research and characters.