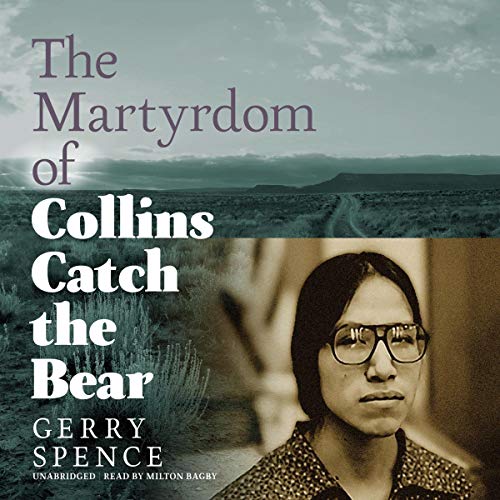 The Martyrdom of Collins Catch the Bear

Written by: Gerry Spence
Narrated by: Milton Bagby
Try for $0.00

The search for justice for a Lakota Sioux man wrongfully charged with murder told here for the first time by his trial lawyer, Gerry Spence

This is the untold story of Collins Catch the Bear, a Lakota Sioux, who was wrongfully charged as part of a conspiracy with the murder of a white man at Russell Means's Yellow Thunder Camp in 1982, a controversial American Indian encampment in the national forest. Though Collins was innocent, he took the fall for the actual killer, a man placed in the camp with the sole intention of destroying the reputation of AIM.

This story reveals the struggle of the American Indian people in their attempt to survive in a white world, on land that was stolen from them. We live with Collins and see the beauty that was his, but that was lost to the pressures of a racist, white society. Today, justice is still struggling to be heard in this case, as well as many like it in the American Indian nations.

What listeners say about The Martyrdom of Collins Catch the Bear

Not your average indigenous injustice story

This was a surprisingly powerful account of one man's, a boy really, struggle with his own identity and sense of belonging. There aren't a lot of fireworks or massive plot twists to intrigue the listener, though there is one swerve that should keep at bay a particular breed of critic to stories of injustice inflicted upon native peoples. But yet, the story does keep the listener transfixed, with its depiction of Collins Catch the Bear, and his stoic, yet seemingly self-destructive, demeanor, in his heart doing what he felt he needed to do. There is tragedy in that story. But there are also other evil forces at work, relatively small scale examples of prosecutorial misconduct and governmental manipulation that is reminiscent of J. Edgar Hoover's COINTELPRO. Nothing so elaborate as that here, but it does serve to highlight the dedicated actions of one small person, trying to save his community the best he knew how. I can envision this as source material for a great little indie film.

Awesome story and loved the narrator. This poor kid had a hard life from start to finish. Glad I listened