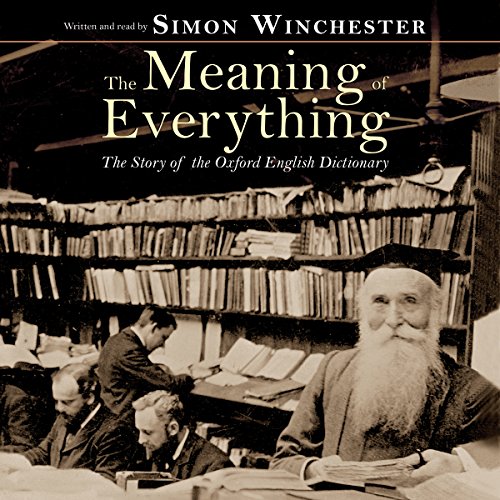 The Meaning of Everything

From the best-selling author of The Professor and the Madman, The Map That Changed the World, and Krakatoa comes a truly wonderful celebration of the English language and of its unrivaled treasure house, the Oxford English Dictionary.

Writing with marvelous brio, Winchester first serves up a lightning history of the English language - "so vast, so sprawling, so wonderfully unwieldy" - and pays homage to the great dictionary makers, from "the irredeemably famous" Samuel Johnson to the "short, pale, smug and boastful" schoolmaster from New Hartford, Noah Webster. He then turns his unmatched talent for story-telling to the making of this most venerable of dictionaries. In this fast-paced narrative, the reader will discover lively portraits of such key figures as the brilliant but tubercular first editor Herbert Coleridge (grandson of the poet), the colorful, boisterous Frederick Furnivall (who left the project in a shambles), and James Augustus Henry Murray, who spent a half-century bringing the project to fruition. Winchester lovingly describes the nuts-and-bolts of dictionary making - how unexpectedly tricky the dictionary entry for marzipan was, or how fraternity turned out so much longer and monkey so much more ancient than anticipated - and how bondmaid was left out completely, its slips found lurking under a pile of books long after the B-volume had gone to press. We visit the ugly corrugated iron structure that Murray grandly dubbed the Scriptorium - the Scrippy or the Shed, as locals called it - and meet some of the legion of volunteers, from Fitzedward Hall, a bitter hermit obsessively devoted to the OED, to W. C. Minor, whose story is one of dangerous madness, ineluctable sadness, and ultimate redemption.

The Meaning of Everything is a scintillating account of the creation of the greatest monument ever erected to a living language. Simon Winchester's supple, vigorous prose illuminates this dauntingly ambitious project - a 70-year odyssey to create the grandfather of all word-books, the world's unrivalled uber-dictionary.

"With his usual winning blend of scholarship and accessible, skillfully paced narrative...[Simon] Winchester successfully brings readers inside the day-to-day operations of the massive project and shows us the unrelenting passion of people...who, in the end, succeeded magnificently. Winchester's book will be required reading for word mavens and anyone interested in the history of our marvelous, ever-changing language." (Publishers Weekly)
"Teeming with knowledge and alive with insights. Winchester handles humor and awe with modesty and cunning." (The New York Times Book Review)
"Entrancing." (Chicago Tribune)

What listeners say about The Meaning of Everything

OED you know what they stand for now you'll totally get the picture!

A delight to listen to and learn -no stone was left unturned to write about the subject ,the personalities etc etc

When you finish listening to this book, you will have a new found respect and admiration for dictionaries and the enduring characters who are responsible for creating them. Some complained that the book was nothing but a thesaurus of word origins. True, it starts out that way, but it definitely does not end that way. You are taken through decades of struggle, defeat and ultimate success. How the OED was ever completed was a miracle, but also a testament to the strength and endurance of the men who created it.

This book is exactly as advertised, only much more so. You expect the brief outline of the English language, the history of early lexicography, but perhaps not the enthralling detail about the individual contributors to what would become the OED, not only the major editors, but the staff, and the immense number of reader volunteers who made the dictionary possible. At some point the author says something to the effect that the editors didn't care what the personal circumstances or characters of the volunteer contributors were, so long as they were competent, and for me the most moving aspect of this book was in the later chapters when some of these readers and contributors are described. At times, I was brought to tears by their stories. As presented here, the OED was a labour of love--paid sometimes, more often not--of many people, for some of whom their work on it seems to have acted as a kind of redemption in lives otherwise lost in frustration, obscurity, or madness.

Well, I loved it. The author's humanistic outlook shines through every line, and furthermore he is a very pleasant reader!

For everyone who has ever pondered entries in the OED and wondered (among other things) how they could ever have located and organized all those quotations before the age of the computer...this is the book for you.

I bought this audio book because I love words but it was so much more than just a story of words. It was the story of a massive undertaking by fascinating people transcending 80 years which resulted in the English language having order for the first time. The plot contained protagonists and foils all with quirks and peccadilloes. The words were rich and joyous, but l enjoyed the people and the story more. It was clear that the author loved his material and by reading it himself did more justice to it than someone else reading it. I hope that this book might find a wide audience because it is a most deserving narrative.

I have listened to nearly three dozen audiobooks and i would definitely rate this in the top 5.

This is the type of book that outside the normal course for many listeners that I would encourage them to try. You will be pleasantly surprised.

The Meaning of Everything

What a disappointment. After seeing this in the bookstore, I was excited to start listening to it on my iPod. I was expecting an enticing story that told of the challenges faced by the creators of the OED; what I got was a virtual thesaurus of word origins and histories of the cultures they came from. Yawn.

Not a bad history of the OED

A very interesting listen with lots of information about the people involved in making the dictionary and a fair amount about the words that comprise it as well as some insights into the lexicographer's art.

Where does The Meaning of Everything rank among all the audiobooks you’ve listened to so far?

In terms of non-fiction books the Meaning of Everything ranks well up the list of my prior audiobooks. It's such a great story, and the English accent of the reader works so well for the content, just loved it.

Not a gripping tale

Of all the books by Simon Winchester that I've "read", this was sooooo boring that I didn't even finsh it. The historical books on natural disasters - "Krakatoa", "A Crack in the Edge of the World" (1906 San Francisco Earthquake) - and the history of geology - "The Map that Changed the World" were very interesting. Even the "Professor and the Mad Man" was an OK listen. So I thought this book was a natural progression... but it lost my attention and I couldn't finish.

Lacks engagement. More or less a drone narration of facts with some interesting anecdotes and stories here and there.

Sure not to disappoint, this ode to the English language recounts the little known details that encumbered this stately book. Just the last chapter alone is worth a listen. This should be read by all to truly appreciate the complexities of such an endeavor.

Wonderful book that will make you love the OED

This book is about how the Oxford English Dictionary came into existence, and the magnificent (and often eccentric) people behind this titanic effort, all conducted in an age before the advent of word processors and the Internet. It vividly describes the people from all walks of life who contributed to the dictionary, giving faces to those who labored steadfastly in obscurity, many of them as volunteers, like the unnamed brick-layers in building a great cathedral they may never see completed in their lifetime. It makes one appreciate how the people dedicated to the OED shared a sense of purpose, and in particular the wonderful leadership of James Murray who edited the first edition of the OED. The narration by the author is terrific, as the book's witty humor, as well as his warmth and affection toward the people he writes about, come through in his reading. It's a great book for anyone who loves the English language, and also for readers who appreciate British personalities.