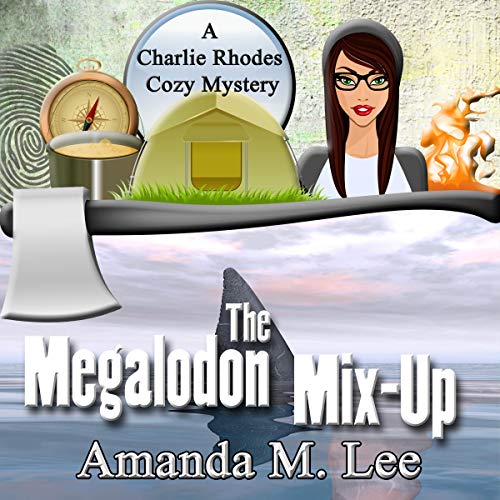 Charlie Rhodes' life has taken a turn. Not only is she working her dream job, but she’s also taken on a dreamy co-worker and is officially dating the office security chief. Yeah, she’s still trying to wrap her head around it, too. She doesn’t have much time because a high-profile incident in Florida means the team is on the hunt, and this time the likely culprit is none other than a prehistoric shark that’s been extinct for millions of years. For Jack Hanson, the mere thought that a Megalodon is hunting the Gulf of Mexico waters is too much to bear. He’s on edge and irritated, and that’s on top of the fact that legacy foundation co-workers are starting to find out about his relationship with Charlie.

For her part, Charlie is enjoying herself. Not only is she looking for a giant shark, but she’s investigating in the middle of an author conference and the victim was the one person hated by absolutely everyone. She’s learning on the job…and it’s a tangled web of lies and intrigue to wade through. There are suspects at every turn, blood in the water, and hungry sharks looking for a meal. It’s another fun-filled adventure, and the stakes in this one are graver than anybody anticipated.

What listeners say about The Megalodon Mix-Up

I really wish Authors and publishers would learn, if you must switch narrators especially following a fantastic one that they could do a better job of replacing with similar narration ability. Jennifer Araya isn't bad but she "JUST READS" I can do that, great narrators make you feel like you are in a movie. Jennifer is a middle grade book narrator for children in my opinion and her craft will improve I hope but following Emily is tough. Everyone now sounds like they are in high school instead of adults. Too bad. Story great as usual but if the author has any power I would have held off on the audiobook until Emily Lawrence was available or a like narrator could be found. Customers do hold that against authors and publishers. They lose sales too. I won't buy another basic narration story for this series after starting with a great narrator, and I don't normally purchase the kindle book unless audio is available as well.

I have listened to pretty much all of the books by Amanda M. Lee and absolutely love them all and I understand she needed a new narrator for the series but this new one is not very good and all of the characters sound the same. It is really hard to get into this book...

I got a little bored with the story line. I don't know why I got bored because the narrator did an excellent job narrating. Maybe the word Megalodon was referenced too many times. overall the story flowed well. I was given this free review copy audiobook at my request and have voluntarily left this review.

I couldn't stay attached to the story. I love the former narrator and I could not get behind the male voices of from this narrator. I didn't like the male characters coming from this narrator. It may not be her fault - I may have just liked the former narrator more. I don't know if I would listen to any additional books, and will probably read them. Also, I understand the other reviews, let's get more into Charlie's character, magical skills, and background. It's a better story than an extinct shark.

Not the best cozy or paranormal.

The main character has power that she uses only twice in the entire book and even when in danger they seem to be an afterthought. Mindless listening at best.

Pretty painful to listen to

I have listened to the three books prior to this in the series and while campy, and sort of silly, I still enjoyed them. This book, is a different story. The performer is just not a good fit for the material. The writing is just awful. It is boring, juvenile, and bordering on imbecilic. The performance of the material is among the worst I've heard. I made to about half way into the fourth chapter and just could not go further. I don't like leaving a bad review, but I'm annoyed that I wasted a money on this.

This was a fun book to listen to. Charlie cracked me up so many times and Jack brought enough levity to balance her out. They make a great pair. Who killed the nasty author? Was it a shark or one of the many who had hard feelings towards her? Hmmm, you'll have to listen to find out. There's action, adventure, suspense, romance and lots of humor. Loved it! This was a fun and entertaining to listen to. I love Jennifer Jill Araya's narration and how she kept from loosing it while reading is simply amazing! Overall, a great listen worth your time!

I really enjoyed the behind the scenes story of the writers conference and am wondering if it is a roman à clef. Daring if so.

I wish Charlie used her magic more, like Zoe in another series. Maybe I am bloodthirsty. Anyway, I look forward to #5 coming soon!

Charlie Rhodes is an interesting character. I love the situations she gets into. Hiding in plain sight. I am enjoying the romance with Jack.

The narrator did a fabulous job and certainly kept me engaged as I listened to The Megalodon Mix Up ( I giggled whenever I heard that word narrated) and can I just say I love the tittle?

Charlie Rhodes and the team she is a part of, travel to Florida to investigate the death of a particularly nasty author at a convention. The big question is was is a prehistoric shark (Megalodon), a normal shark or was she murdered?

As the team, including Charlie’s secret love Jack Hanson investigate, things become more complicated. This was a book filled with intrigue, danger, suspense, twists and turns and was altogether a thoroughly enjoyable listen.

In fact I will be on the look out for more books by this author as soon as I can.