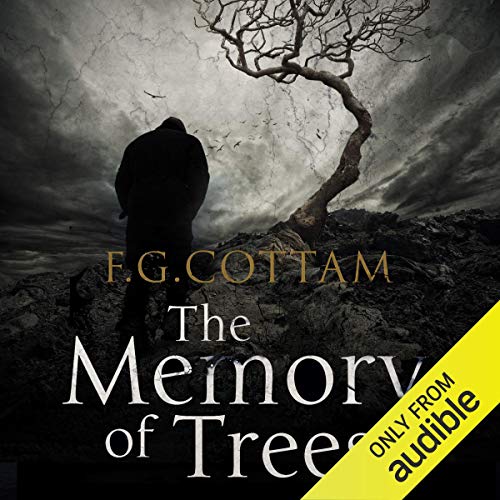 The Memory of Trees

Billionaire Saul Abercrombie owns a vast tract of land on the Pembrokeshire coast. By restoring the original forest that covered the area before medieval times, he believes he will rekindle the spirits of ancient folklore. But the re-planting of the forest will revive an altogether darker and more dangerous entity - and young arboreal expert Tom Curtis will find himself engaging in an epic, ancient battle between good and evil. A battle in which there can be only one survivor.

Former magazine editor Francis Cottam is the author of four novels and the novelization of a feature film. His debut novel The Firefighter was shortlisted for the W.H. Smith Literature award. It was followed by Hamer's War, Slapton Sands and A Shadow on the Sun. All four of these novels are either set in, or examine the repercussions of the Second World War.

The Firefighter examines one man's experience of the most intense period of the London Blitz. Hamer's War takes as its theme the moral dilemma facing a brave German soldier recovering from a wound sustained in battle on the Eastern Front.

The Resident is the novelization of a film made by the resurgent Hammer production company. Along with Slapton Sands and A Shadow on the Sun, it is available for download on Kindle.

Francis is the author of a series of paranormal thrillers published under the pen name F.G. Cottam

What listeners say about The Memory of Trees

This is my third Cottam book and so far he's 3 for 3 for me. The plot of this one was very intriguing and the mystery of it all kept me hooked. But if this is your first time hearing about F.G. Cottam I recommend first checking out "The Colony" or "Brodmaw Bay' and if you like what you hear there, you'll like this one too. Don't get me wrong, I really enjoyed this book but it wasn't quite the 5 star the other two were. As for the narration, I really don't think anyone could narrate Cottam's books better than David Rintoul. He gets so into it he'll have you biting your nails and sitting on the edge of your seat. And I'm really glad he does a great job with all the voices cause this book does flow right into different scenes and character perspectives without pause which did sometimes get me confused. Overall, this book has everything I love about Cottam's writing; its darkly atmospheric, contains nail biting suspense and has the perfect amount of mystery and horror. Furthermore, Cottam creates captivating plots with life-like characters encountering truly evil and ancient supernatural beings and creatures. Can't wait for the next one!

Wish I saved my credit

This story has an interesting concept, which is why I chose it. However, that's about where it ends. The plot and characters are not well developed. The writing is just okay. So when you combine this with the authors confusing use of last and first names for the same characters, inadequate introduction of new characters and disjointed/rushed plot, it makes it somewhat difficult to follow. Lastly, I liked the narrators voice, but there was no pause at all when shifting scenes or characters, also lending to the overall confusion.

Restoring a forest is a good thing...isn't it? Maybe not if the Welsh myths are true. Tighter editing on the repetitions would have been nice, but overall a good tale and well read.

F.G. Cottam is a new favorite of mine

Yes, to anyone who likes a good mystery and enjoys the supernatural.

As I've mentioned before in other reviews of F. G. Cottams books, the characters are all so unique and interesting that it is hard for me to pick a "favorite".

He is one of my new favorite narrators. I love his British accent and his ability to do any dialect and any voice superbly. He really brings life to the characters and suspense to the story.

I don't know about laughing or crying but it certainly kept me riveted.

After listening to "The Colony" series, I had to have more! . In my opinion, F. G. Cottam is one of the best writers that I have discovered in a long time. First, I love how atmospheric his books are. He writes in such a skilled way that the listener feels like they are right there experiencing the unfolding of the story with the characters. He adds a sense of British history to his books and always a great touch of the supernatural. His books are almost poetic, but this doesn't take away from the mystery and suspense. I also like that he can write this genre (considered to be horror) without a lot of gore. It is there, but it is secondary to the story and subtle. His characters, even the villains, are so interesting. And I like that the "heroes" aren't perfect, but instead very human.
I can hardly wait to listen to the next one!

I think the narration by David Rintoul made this thoroughly enjoyable. He was so great as a narrator that at times I found myself cringing in horror and then cackling in laughter because I'd gotten so wound up in the story.

I love trees, so I was slightly disappointed that the plantation would do what it did. I would have liked to see a forest replanted - without the horror.

I enjoyed this - and will listen to it again.