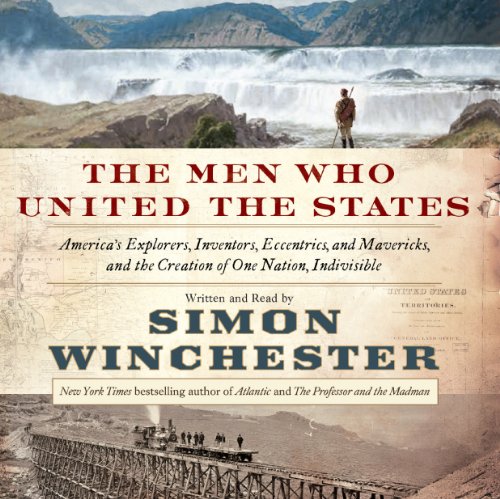 The Men Who United the States

Simon Winchester, the acclaimed New York Times best-selling author of Atlantic and The Professor and the Madman, delivers his first book about America: a fascinating popular history that illuminates the men who toiled fearlessly to discover, connect, and bond the citizenry and geography of the U.S.A. from its beginnings.

How did America become “one nation, indivisible”? What unified a growing number of disparate states into the modern country we recognize today? To answer these questions, Winchester follows in the footsteps of America’s most essential explorers, thinkers, and innovators, such as Lewis and Clark and the leaders of the Great Surveys; the builders of the first transcontinental telegraph and the powerful civil engineer behind the Interstate Highway System. He treks vast swaths of territory, from Pittsburgh to Portland, Rochester to San Francisco, Seattle to Anchorage, introducing the fascinating people who played a pivotal role in creating today’s United States.

Throughout, he ponders whether the historic work of uniting the States has succeeded, and to what degree. The Men Who United the States is a fresh look at the way in which the most powerful nation on Earth came together.

What listeners say about The Men Who United the States

Simon Winchester tells us the history of America

I could listen to Simon Winchester read his grocery list, so I'm predisposed to like this book. My husband and I listened to him read his story about Krakatoa several years ago and it was wonderful. This book begins with the man charged with the task of measuring out -- by metes and bounds -- the entire western portion of the United States. Even that small story is wonderful. Winchester goes on to tell about the trailblazers of American history, from the Erie Canal to the railroads, the telegraph to the radio, and even up to the internet of today. We read this while on summer driving trips and found we could leave it at any time and pick it up later without missing a beat. It is fascinating and quirky. Just like Mr. Winchester himself.

Should be required reading for any American

What did you love best about The Men Who United the States?

Simon Winchester is a most eloquent writer and manages to fill in the gaps that connect our nation's history that are woefully overlooked in most collegiate courses. Not the first one of Simon's that I've read and have found each title to be brilliant and engaging. I've read fiction that had less compelling drama.

What other book might you compare The Men Who United the States to and why?

Any Simon Winchester book. He's in a class of his own.

Honestly, I wish this could be required reading in high school. I think kids (and adults) would be drawn to history and have a much better understanding of who we are as a nation. I cannot say enough good things about the content and delivery.

In the three years that I lived in Pittsburgh, no-one ever explained to me why the Brits found it necessary to build a fort there. Now I know. That is one of the many pieces of information that I gleaned from listening to "The Men". Simon Winchester has the command of the English language that you would expect from a first class story teller. He injects drama where he can, and comes at his suject matter from interesting angles. He explores the political, economic and social landscape. But above all, and this is his genius, he digs out the fascinating little-known stories and facts that enrich his presentation, at once giving credibility to his viewpoint and addressing his subject matter on a human scale. So, after listening to "The Men" I came away better informed, having filled in some gaping holes in my knowledge of American history, the result of a deprived childhood (I was educated in England). But I'm not sure I came away with a strong opinion for or against. This is because while Winchester makes no secret of his opinions, be they nostalgia for the past, concern for the environment or excitement for the future, there is no real consistent message coming out of this book. The title and the theme are an excuse for stringing together some fascinating insights and some really good stories, and a bit of travelog around the US. I enjoyed the book, as I knew I would because I alway enjoy his writing, but did I come away uplifted, on a new plane, ready to go out and spread the word ? Not so much.

While I appreciate the reader/author's enthusiasm for his work, and he did a very good job speaking, the book should be called "The biographies of dozens of random people and my personal travels to validate them." I love historical books but this jumps all over time, geography, politics, and opinions, and it became hard to follow. Just when there was a historical part I wanted to know more about he goes off on a tangent of a personal trip he took, filled with too many adjectives of what he did and saw. It has little to do with actual states, and more to do with how people moved west, connecting the Atlantic and Pacific, and how we traveled since.

Far to political and personal

I am so grateful that Audible has a return/exchange policy! This book is filled with the author’s personal opinion and information. I don’t think most people choose to read a history book expecting to have tales about the author’s travels and who he met. His pondering about why Americans are so “American” was more than I could take.

A little slow but worth sticking it out.

The characters are unknown to many and little remembered in history but one comes away with a deep appreciation of the greatness of our country and it's amazing people. Another great history of our of the USA from a different angle.

The author does not seem to ever miss an opportunity to inject his politics and opinions amongst what should be a work of history. That’s how you find yourself listening to digressions on nuclear weapons among sections about Lewis and Clark, or the author’s opinions about certain contemporary radio hosts, or haphazard guesses about church impact on geology, or guesses about factory placement. The comments often feel somewhat out of place within the context of what he is discussing.

Then there is the almost worshipful repeated emphasis regarding big government programs, and suppositions about positive impacts from journalism that seem somewhat self-serving.

This is not really up to the standards of other works of history.

Would you listen to The Men Who United the States again? Why?

Yes, there is so much interesting information contained in this book, that a second or third read wouldn't be out of the question, just for all of it to register.

What was one of the most memorable moments of The Men Who United the States?

Have you listened to any of Simon Winchester’s other performances before? How does this one compare?

It's not that kind of book, although it's full of chuckles.

The combination of wonderful writing, author as narrator and a wide range of interesting stories is an unbeatable combination. Moreover, Winchester goes beyond the major historical stories we are all familiar with, and illuminates a wide range of other people and events that played a role in forming the United States.

An Interesting Amble through a Big Story

A little confused. I couldn't figure out his structure until the end. But he made a good story out of an enormous library of information. And he made it interesting, in bites you can follow. He colors some of his narrative with editorials parading as facts. This cheer leading got heavy handed and tiresome in the era and chapter on rural electrification and continued into the modern era and public television. Too bad. It detracts from an otherwise pleasant story. I've enjoyed two of this author's other books immensely. This one has its moments but is a little frustrating to read.