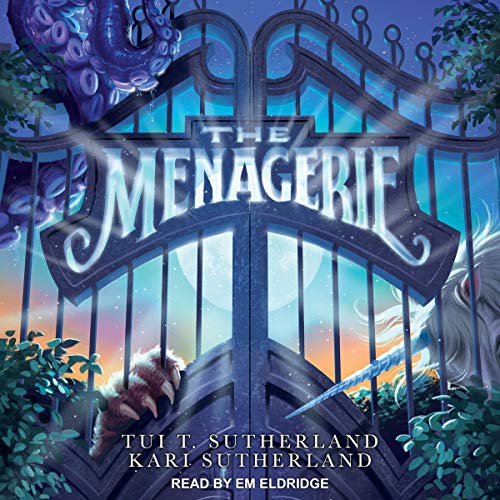 From the New York Times best-selling author of the Wings of Fire series, Tui T. Sutherland, and her sister, Kari H. Sutherland, comes the Menagerie series, perfect for fans of Brandon Mull's Fablehaven series and The Spiderwick Chronicles.

In the small town of Xanadu, Wyoming, lies the Menagerie, a top secret facility filled with unicorns, dragons, phoenixes, and other fairy tale creatures. At least, it was a secret - until six griffin cubs escaped.

If Logan and Zoe don't get the cubs back fast, the entire Menagerie will be shut down. The race is on and the resulting adventure is only the beginning of a thrilling series that will leave listeners wanting a magical menagerie of their very own.

What listeners say about The Menagerie

starting to love these two authors

I didn't think anything could come close to grabbing my attention the way Wings Of Fire series did, but I was wrong. these authors are amazing stories tellers. I am forty years old and I loved getting lost in their fantasy land for a bit!

The way the story is laid out is excellent. I enjoyed how the author would give u enough information to keep you wanting more. Starting the next title now.

My son and I couldn’t stop listening to this series. Listened to all three continuously. We loved the imagination and the personalities of all of the creatures.

I like the fresh perspective of this book. The characters are balanced and the mythical creatures fun.

I made it about 3 hours into this title and couldn't continue. Story was extremely slow and boring. MC is surprised by ordinary events and nonchelont about extra ordinary events. Could not get into the story at all.

Makes me want to move to Wyoming

Logan is your typical middle school hero - interacting with his dad over the phone, longing to reconnect with his absent mother, discovering a mythical object and his magical power, dealing with being new-kid-in-school, threatened by a memory wipe. If I were a bit younger than Logan, I would love the story (except for the "girl" part). And I agree, just as fantastic as Fablehaven and Spiderwick. Minus one star for rather simplistic plot points (eg breaking in to a house) and flat characters.

Reminiscent of my childhood reads, Hardy Boys, Tom Swift - for which my librarian praised my dedication but said no, she would not have them in her library.