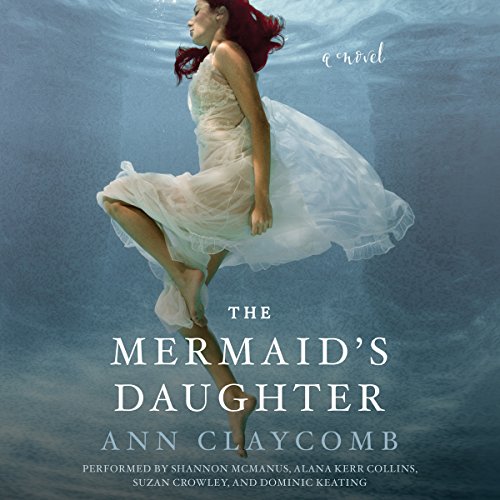 A modern-day expansion of Hans Christian Andersen's The Little Mermaid, this unforgettable debut novel weaves a spellbinding tale of magic and the power of love as a descendent of the original mermaid fights the terrible price of saving herself from a curse that has affected generations of women in her family.

Kathleen has always been dramatic. She suffers from the bizarre malady of experiencing stabbing pain in her feet. On her 16th birthday, she woke screaming from the sensation that her tongue had been cut out. No doctor can find a medical explanation for her pain, and even the most powerful drugs have proven useless. Only the touch of seawater can ease her pain, and just temporarily at that.

Now Kathleen is a 25-year-old opera student in Boston and shows immense promise as a soprano. Her girlfriend, Harry, a mezzo in the same program, worries endlessly about Kathleen's phantom pain and obsession with the sea. Kathleen's mother and grandmother both committed suicide as young women, and Harry worries they suffered from the same symptoms. When Kathleen suffers yet another dangerous breakdown, Harry convinces Kathleen to visit her hometown in Ireland to learn more about her family history.

In Ireland, they discover that the mystery - and the tragedy - of Kathleen's family history is far older and stranger than they could have imagined. Kathleen's fate seems sealed, and the only way out is a terrible choice between a mermaid's two sirens - the sea and her lover. But both choices mean death.

Haunting and lyrical, The Mermaid's Daughter asks: How far we will go for those we love? And can the transformative power of music overcome a magic that has prevailed for generations?

What listeners say about The Mermaid's Daughter

This novel goes nowhere. I have been trying to complete this novel for over a week and I have a boring tedious job that allows us to listen to headphones but, I have been turning this book off prefering to suffer in silence. Here are the straight facts regarding why I dislike this book.
#1 None of the characters are likeable or memorable. Their dialouge feels forced and dry.
#2 The primary love story has no feeling and is also dry. The starcrossed lesbian lovers evoke absolutely no passion. #3 The main character is whiny dramatic annoying and this does not enhance the storyline. #4 The mermaid theme was underexplored. All we heard about was her feet pain and her toungue pain blah, blah. #5 The author tried to be so deep by revolving the whole story around opera and comparing everything to operatic things but it was not that deep. It was boring and pretentious.#5 The author used tons of descriptions about mundane things that did not add to the story. Avoid, Avoid,Avoid. Normally I hate that I am blowing thru my audiobooks too fast, hah not with this one.
The narrator was not bad, not great. I did not like the story being told from multiple person's point of view either. I did not like this book. I would not recommend or reread.

An old friend with a makeover

I loved it! The story of the little mermaid taken and spun into a beautiful web of history, music, and magic. A new classic. I'm sure I'll reread it again and again.

A slow and beautiful story

At first I wasn't sure if I was going to finish it...but then I began to fall in love with one of my old favorite stories that I've known since I was a child, but told from a different perspective. The new twist on this old tale made me fall in love with the characters. At times the characters annoyed and frustrated me but taking a step back I learned to appreciate them.

If you have an appreciation for classic tales, music and a bit of operatic drama, this is definitely a good listen/read.

SPOILERS! I love the premise of this book, seven generations of a curse that none were willing to pay the price to break. The sea witches narrating chapters were really cool too. Unfortunately, I did not like the changing perspectives. Hearing from Harry and Robin didn’t give the reader much insight that we wouldn’t already know from the main character’s point of view. It pulled me out of the story. I feel like more of the book was outside the main characters POV than in it. I wish it would’ve stayed in her POV more, especially during the really important parts of the story like the ending and the cave scene.

The writing was really good and it was a hard book to put down because of it. The tie ins to music were very creative and honestly taught me things about opera that I didn’t know. I loved the symbolism throughout the book.

(SPOILERS ON THE ENDING!) The ending was my least favorite part, though. It felt like a complete cop-out. Like all these women that came before Cathleen died for nothing when it would’ve been as simple as pretending to stab their lover? What happened to the blood having to cover her feet?

The only thing i would remove is the use of The Most High God’s name being taken in vain .....inexcusable and unnecessary— the only thing that took away from the Book. The rest was magnificent.

Really enjoyed hearing this take on the little mermaid story. The perspective was realistic and modern, riddled with questionable mental illness and some disbelief from the people around her. The focal point was on the human side of things, and the main characters personal story, rather than the mythical mystery surrounding mermaids in the real world. Although, I would have preferred a bit more detail regarding the mermaid lore, and magic surrounding the knife. A greater hint at the origins of the witches would have been fun too. The entirety of the main characters respond in a bit of a poetic way, and descriptions are very artistic. The performance was.. interesting. I really liked that there were multiple voice actors. The actor that plays Robin should definitely not have half sung the opera lyrics.

In love with its ideas

I tried a few times and couldn’t get into this. The concept of the descendant of the little mermaid loving a contemporary life as an opera singer was compelling but the execution isn’t. It plays it’s hand on all the clues as to who she is so early and I don’t feel like listening for several hours for the main characters to catch up. I tried a few times to get into it and finally gave up.

This love story is filled with mystery, intrigue, love, & folklore. I loved it! Great read.

I loved this book from start to almost finish. I cried at how beautifully the story was told. My only problem was this:
Spoilers?! :
The end of Kathleen's story is beautiful and heartbreaking. I thought it would end with Kathleen, but it didnt. As soon as the last chapter of her story ended, it immediately plunged into a short bit of Fand's story. Not even from her point of view. It was abrupt, startling and didnt allow for a proper grieving period for Kathleen's story.
I wish there was a pause between these two chapters. I ended up angry at the book at the end because of the abruptness. Anyway.
Just pause it after the last chapter of Kathleen's story is my recommendation lol.

I listen to a lot of audio books, and sometimes struggle to really get into the story. I had no issues with this story, I didn't want to turn it off. I was very impressed with Ann Claycomb's interpretation of the Little Mermaid story, and I really loved her book. I recommend it highly.