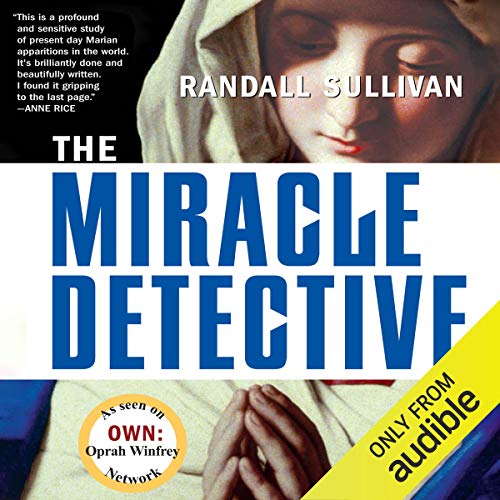 Written by: Randall Sullivan
Narrated by: Jeremy Arthur
Try for $0.00

In a tiny, dilapidated trailer in northeastern Oregon, a young woman saw a vision of the Virgin Mary in an ordinary landscape painting hanging on her bedroom wall. After being met with skepticism from the local parish, the matter was officially placed "under investigation" by the Catholic diocese. Investigative journalist Randall Sullivan wanted to know how, exactly, one might conduct the official inquiry into such an incident, so he set off to interview theologians, historians, and postulators from the Sacred Congregation of the Causes for Saints. These men, dubbed "miracle detectives" by the author, were charged by the Vatican with testing the miraculous and judging the holy.Sullivan traveled from the Vatican in Rome to the tiny village of Medjugorje in Bosnia-Herzegovina, where six visionaries had been receiving apparitions of the Virgin Mary. Sullivan's quest turns personal and takes him to Scottsdale, Arizona, site of America's largest and most controversial instances of Virgin Mary sightings, culminating an eight-year investigation of predictions of apocalyptic events, false claims of revelation, and the search for a genuine theophany - that is, the ultimate interface between man and God.

What listeners say about The Miracle Detective

I loved this book. There were parts that scared me and parts that brought me peace. It is a very interesting subject. I would love to read a follow up of what the author thinks all these years later and what happened to the people in the book.
I did not enjoy the narrator. I found the voice harsh and there were mistakes that could have been corrected.

I loved it. Took time to read but it an excellent read. a must read book

I loved it. I don't want it to be finished. I'll probably just start over and do it again.

Fascinating book on the study of miracles

A well written account of the struggle to reconcile faith with fact. I sat in my driveway listening to this one-even after getting home from work.

This book is much more a history of the politics, history, and mystery surrounding Bosnia and Medjugorje than anything else. The author does explore many other miracles, mostly Marian apparitions, but spends such an extensive amount of time on the area around Medjugorje and its historical context that his thesis gets lost.

Chapter 13 about 17 minutes in, actor asked to re-do a word. Never encountered poor editing. made me smile. we're all human. story is very good.

I really enjoyed this book

It was factual and had meaning. The writer was caring towards the people he was investigating.
I liked the writer as a person which made tne book a very worthwhile read.
You have to find your own answers but people like mr Sullivan can only help to inform you with the facts.

I did love it. I was disappointed when it was finished. it does make you think.