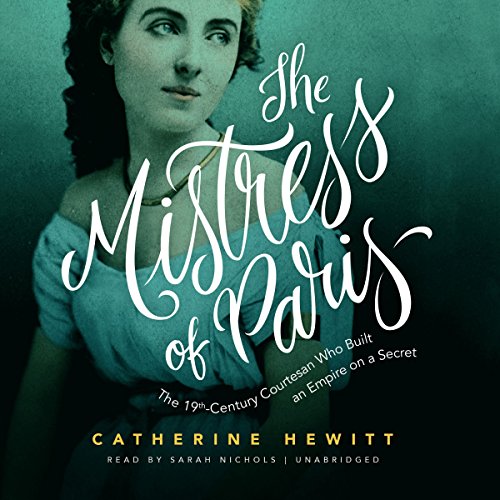 The Mistress of Paris

Written by: Catherine Hewitt
Narrated by: Sarah Nichols
Try for $0.00

But her glamorous existence hid a dark secret: She was no comtesse. She was born into abject poverty, raised on a squalid backstreet among the dregs of Parisian society. Yet she transformed herself into an enchantress who possessed a small fortune, three mansions, fabulous carriages, and art the envy of connoisseurs across Europe. A consummate show-woman, she ensured that her life - and even her death - remained shrouded in just enough mystery to keep her audience hungry for more.

Spectacularly evoking the sights and sounds of mid- to late 19th-century Paris in all its hedonistic glory, Catherine Hewitt's biography tells, for the first time ever in English, the forgotten story of a remarkable woman who, though her roots were lowly, never stopped aiming high.

What listeners say about The Mistress of Paris

I didn’t think this was remotely as interesting as other reviews and publisher’s summary made this out to be. It’s a highly favorable bio about a French courtesan. Very dry. No scandalous gossip worth retelling. It reads like an inventory: describing her house and clothing in detail in great detail. The plays she attended, art she collected, the books she read- these are the things I learned. Oh and she had the most impressive and expensive bed (prostitute’s throne). But this bio did not bring this woman to life. Considering I’d not heard of the Mistress of Paris before, what this biography did not tell me was why I should be interested in her. Why was this woman interesting or important? She was an absent mother, and lived only in pursuit of her own vanity.

The writing was just not compelling enough to live up to the title or the description.

I listened to this every night before I went to bed. It made me dream of being there and watching these fabulously dressed women doing their thing. I want to be there and I want this life. it must have been marvelous.

Loved, listened to it three times.

A strong, fascinating, brilliant, cunning and beautiful lady. Yes, I said lady. Would love to be a guest at her "five o'clocks."

PR mastermind before her time

No joke I have listened to this biography 3 times. The Comtess was truly a visionary in personal branding and PR who knew how to cultivate her reputation and leave the public always wanting more, even up to and beyond her death. Plus her central role in the 1880’s Parisian art scene and use of political connections are pretty remarkable, especially considering her humble origins.
100% recommend this audiobook to anyone interested in self-made women, art history, cultural revolution, etc
It’s an easy listen, performance is lovely.

Every page sounds the same

Nothing ever happens to create any story. Just survival in the driest sense.
I waited hours for it to improve

The narrater read this passionate book too fast.
When the speed was lowered it was too slow.

Narrator was terrible!! Spoke so fast & very annoying voice.. Story was interesting but could’ve even listen to it after

purchasing it.. It’s been in my library for over a year and w/ nothing left I suffered thru it.. Horrible voice, spoke very fast & no emotion or cadence.. Interesting bio but better to read than listen!!!

thoroughly enjoyable segment, like a slice of ripe tangerine,of French history. this story, like many others in history has inspired further reading of the period.The 186p's-1910 much like the 1960's through 2010. Both times of extreme political and social import. change! always change.

Could Have Been Better, No Drama in the Narration

What other book might you compare The Mistress of Paris to and why?

One hundred years earlier in England, an identical story of Lady Emma Hamilton had taken place. I found that to be a much better listen. England's Mistress: The Infamous Life of Emma Hamilton, written by: Kate Williams. Or a fun 20th century con artisté, thief and sweetheart swindler purchase instead The Amazing Mrs. Livesey.

Was The Mistress of Paris worth the listening time?

It was better than the other dreary, boring books I had purchased.

Wonderful ! I enjoyed this book so much and recommend it to everyone interested in a great story of a woman with determination and style.