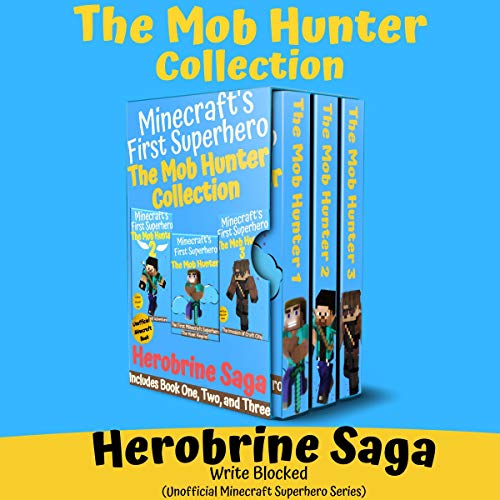 Three books and one incredible deal

Begin the adventure of Minecraft's first superhero: The Mob Hunter, as he fights against villains like Herobrine, The Commander, Crusher and many more.

Don't Know Who The Mob Hunter Is?

He is Minecraft's First Superhero

In The Mob Hunter 1

Say hello to Minecraft’s First Superhero: The Mob Hunter. A deadly creeper attack left Steve for dead, but saved by Apollo Technologies, he was put back together using different parts of different mobs. The King of Mobs, Herobrine, is planning a deadly attack on Craft City and it’s up to The Mob Hunter to stop him. Meet Gwen, Apollo, Paul, and a large cast of character as they battle and train the first superhero the world of Minecraft has ever seen.

In The Mob Hunter 2

In The Mob Hunter 2, Herobrine heals in nefarious ways and new evil threatens Craft City, it is up to The Mob Hunter to hunt again. Still recovering from the harsh and damaging fight with Herobrine, The Mob Hunter must face one of his most dangerous tasks yet. Get ready to meet new characters: both heroes and villains.

In The Mob Hunter 3

The Mob Hunter 3: Invasion of Craft City brings back your favorite characters in the epic, and unpredictable finale to the Herobrine saga. Catch up with Paul, Gwen, Apollo, Steve and of course Robobrine as they star in this new adventure. As Herobrine invades Craft City, it’s up to The Mob Hunter to save the day. Steve must battle the villainous Crusher, a herd of angry endermen and dark energy itself if he hopes save his city. Everything is at stake. No one is safe. Who will live? Who will perish?

Disclaimer: This book is an unofficial Minecraft fanfiction. It is not endorsed, authorized, sponsored, licensed or supported by Mojang AB, Microsoft Corp. or any other entity owning or controlling rights to the Minecraft name, trademarks or copyrights.

What listeners say about The Mob Hunter Collection: Herobrine Saga

Kids have it on repeat

The kids love Minecraft and they love superheroes and so they love this book. They have it on repeat and know all the comedy bits, minecraft references, and the action parts. So much fun and very good at tricking reluctant kids into enjoying books.