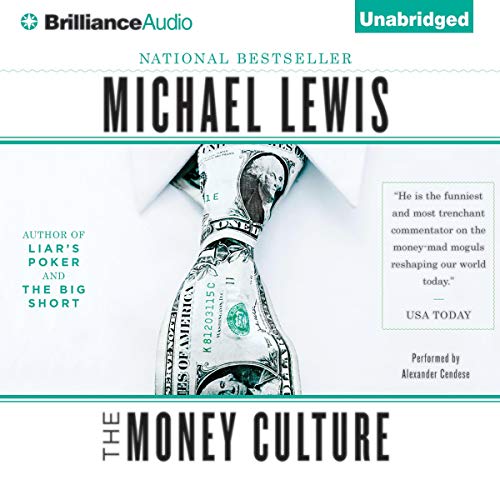 Written by: Michael Lewis
Narrated by: Alexander Cendese
Try for $0.00

The 1980s was the most outrageous and turbulent era in the financial market since the crash of ’29, not only on Wall Street but around the world. Michael Lewis, as a trainee at Salomon Brothers in New York and as an investment banker and later financial journalist, was uniquely positioned to chronicle the ambition and folly that fueled the decade.

In these trenchant, often hilarious true tales, we meet the colorful movers and shakers (or did they call themselves Big Swinging Dicks?) who commanded the headlines and rewrote the rules. Whether he is analyzing the unsavory details of the RJR Nabisco takeover or flaying American Express, Michael Lewis brings to task a wicked pen and a triumphant sense of humor.

"One of our most entertaining writers.... The Money Culture rivals Liar’s Poker in giggle-inspiring quality.” ( BusinessWeek)
"One of those rare works that encapsulate and define an era.” ( Fortune)

What listeners say about The Money Culture

Not the normal great Michael Lewis

Better story flow. Seems like a bunch of random short stories with no real defined message to the reader.

Have you listened to any of Alexander Cendese’s other performances before? How does this one compare?

Yes, I think he's a great narrator. He did a great job keeping me interested in a rather unorganized story line.

Could you see The Money Culture being made into a movie or a TV series? Who should the stars be?

I read the reviews that said this was not Lewis' best work, yet I insisted on purchasing the audio book anyway. Micheal Lewis is one of my favorite authors and I enjoy anything related to finance, but even I was bored at times. Lewis still does a great job writing in a witty and humorous manner, but the underlying story just isn't there. It's just a bunch of short stories thrown together that are similar to "Liar's Poker" but not nearly as good. You can probably pass on this one, and instead just re-listen to "Liar's Poker" or "The Big Short".

Didn't like it at all, as a distinction from every other Michael Lewis' book. .-((

Having read his other works I expected a bit more from this but was dissapointed at the seemingly irrelevant collection of anecdotes. Didn't hold my interest as did his other works. I'd give this book a miss.

Louis Rukeyser in the Amazon

The whole thing is worth it for the hilarious story of the Louis Rukeyser "investment cruise" to the jungle.

I agree that some of these are a bit slow, but it's a rather fun walk through the 80's and 90's, looking back.

I thought the narrator was great.

Not worth the time, the narrator is terrible, READ

What would have made The Money Culture better?

What was most disappointing about Michael Lewis’s story?

narration, which is %100 the value of an audio book.

What character would you cut from The Money Culture?

It a group of non-sequiter short stories.

I would just read this one on your own. not a good audio book as it stands now.

I enjoy everything that Michael Lewis has written ... except this. It is a collection of previously published articles. But the articles just are not that interesting. They lack the fascinating magic that Lewis puts into his books.

This was an excellent overlay between the consequences of what happened (most of which I wasn't really aware of) and the cultures that influenced the directions of things. It was interesting from start to finish.

As the author says at the beginning of the book, this is a series of financial stories. I found them all but one very interesting and often entertaining. Michael Lewis is an excellent author. The narrator was very good

Great writing but unless you were well informed and alive in the 80’s and 90’s, many references may be meaningless.

Awesome listen. Awesomely narrated. Must listen! It was eye opening and insightful and funny which made it very palatable to someone like me who had to research half the book to make sure I understood all the quips and inside jokes being told.