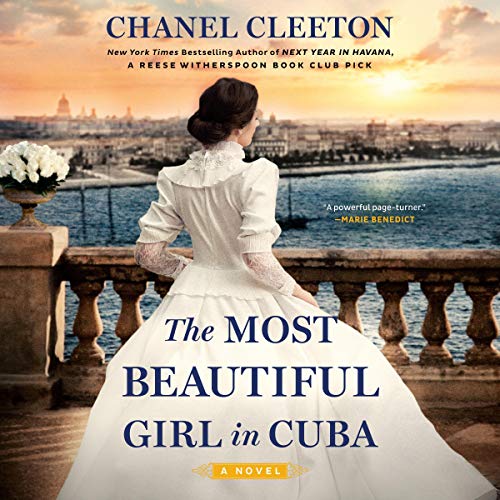 The Most Beautiful Girl in Cuba

"An exciting and inspiring read that shows us how womanhood, courage and revolution are three words that often mean the same thing." (NPR)

At the end of the 19th century, three revolutionary women fight for freedom in New York Times best-selling author Chanel Cleeton's captivating new novel inspired by real-life events and the true story of a legendary Cuban woman - Evangelina Cisneros - who changed the course of history.

A feud rages in Gilded Age New York City between newspaper tycoons William Randolph Hearst and Joseph Pulitzer. When Grace Harrington lands a job at Hearst's newspaper in 1896, she’s caught in a cutthroat world where one scoop can make or break your career, but it’s a story emerging from Cuba that changes her life.

Unjustly imprisoned in a notorious Havana women's jail, 18-year-old Evangelina Cisneros dreams of a Cuba free from Spanish oppression. When Hearst learns of her plight and splashes her image on the front page of his paper, proclaiming her, "The Most Beautiful Girl in Cuba," she becomes a rallying cry for American intervention in the battle for Cuban independence.

With the help of Marina Perez, a courier secretly working for the Cuban revolutionaries in Havana, Grace and Hearst's staff attempt to free Evangelina. But when Cuban civilians are forced into reconcentration camps and the explosion of the USS Maine propels the United States and Spain toward war, the three women must risk everything in their fight for freedom.

"In this powerful, page-turner, Chanel Cleeton has interwoven the stories of three unforgettable historical women against the fiery backdrop of the Spanish-American war and the Cuban fight for freedom from the Spanish. Using the brave acts of real-life historical women as inspiration, The Most Beautiful Girl in Cuba shines the light on the fierce women who played a critical role in this important juncture in time - women who are determined not to be forgotten." (Marie Benedict, New York Times best-selling author of The Mystery of Mrs. Christie)

“Cleeton always delivers! This time, with The Most Beautiful Girl in Cuba, a well-researched tale set against the backdrop of a newspaper war. With moguls determined to drag the United States into the conflict between Cuba and Spain, this novel's women - the reporter, the revolutionary, and the beauty - are all brought vividly to life in a lovingly rendered novel about the triumphs and tragedies of war.” (Stephanie Dray, New York Times best-selling author of The Women of Chateau Layfayette)

“Grace Harrington is my new favourite heroine. I was absolutely fascinated by the world of stunt girl reporters and newspaper wars that she throws herself into, just as I was equal parts enthralled and heartbroken by the story of Evangelina Cisneros, the most beautiful - and courageous - girl in Cuba. And how wonderful to meet another member of the Perez family - the plucky Marina, whose story intertwines with the other women's. Nobody writes about Cuban women - their lives, their loves and their bravery - like Chanel Cleeton does. A truly beautiful book.” (Natasha Lester, New York Times best-selling author of The Paris Secret)

“An enchanting historical novel.... Cleeton skillfully brings off the three strong women’s heartbreaking stories with intriguing twists and turns and a delightful finale. With impeccable research and perfect pacing, Cleeton makes the most of her subject.” (Publishers Weekly)

What listeners say about The Most Beautiful Girl in Cuba

Following the family Perez story through these real life events is simply breathtaking. You most read!

Interesting storyline, but one reader made it almost impossible

The storyline was interesting and I did like the history that was included. The readers of two characters were fine but the reader for marina was almost enough to stop listening to the book. It was like she wanted you to have anger and hate and soap opera trauma in every single sentence of the book; there is no simple reading it must be read with Vehemence with every syllable. I opted to do time and a half speed to push through this portion.

I was worried about this book because I LOVED “Next Year in Havana” so much, I wasn’t sure if this one would be able to stand up to it. It definitely did. Hearing the historical events of the Spanish- American War from 3 women’s perspectives really helps the reader impact of the war on everyone. Not just the war, but yellow journalism, the competition of news outlets, and the influence media has always had on the nation. Along with women’s desire for equality, social class and status inequities, all beautifully told.

Good story, narration not so good

I have listened to two other Chanel Cleeton novels about Cuban history. Like the others, the story and characters were engaging and the book imparted historical information. For the first time I found the reading of one of the characters, Marina, so overly dramatic I considered not reading past the introduction of this character. I am glad I finished the novel because I learned some history about Cuba and newspaper reporting at the time of the war of Independence from Spain, but I would have enjoyed the book much more and given it a better rating had it not been for this production.

The characters were so real. I loved that it was based on historical events. I learned as I enjoyed listening.

Part of Cleeton's Cuba series, set in the last year's of the nineteenth century. The years of the third Cuban war for Independence from Spain; William Randolph Hearst's meddling to get the US involved in a shooting war with Spain; and his media invention of "The Most Beautiful Girl in Cuba" as part of that effort. Well written, with fully-formed characters and a clear glimpse of the horror of the Spanish war to quell Cuban independence.

I loved this book and finished it way faster than I normally do. I wish the narrators had had Cuban accents for the Cuban characters but otherwise the narration was good. Very interesting story and loved learning about the history.

Rebecca Soler really made Marina's character come alive. she read her part with such passion. the whole boom itself was very well read.

The Most Beautiful Girl in Cuba

was at first difficult to get into. started over twice. well worth Listening to.

Further back in time the Perez family is setting its place in Cuban history. Channel Cleeton again captures my heart and love of history with her book.

This was a beautifully written wonderful story I loved it. Chanel Clayton has become one of my favorite authors since I read Next Year in Havana.