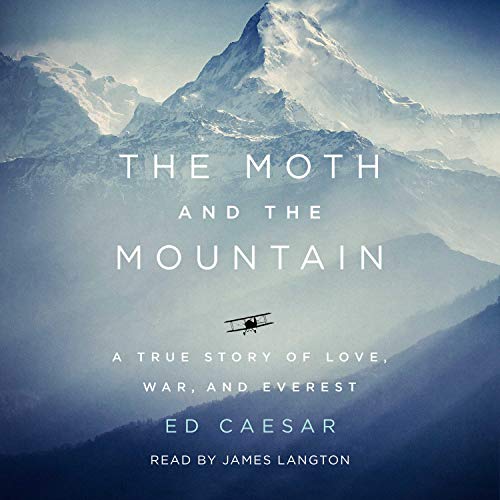 The Moth and the Mountain

“Gripping at every turn.” (Outside)

An extraordinary true story about one man’s attempt to salve the wounds of war and save his own soul through an audacious adventure.

In the 1930s, as official government expeditions set their sights on conquering Mount Everest, a little-known World War I veteran named Maurice Wilson conceives his own crazy, beautiful plan: He will fly a plane from England to Everest, crash-land on its lower slopes, then become the first person to reach its summit - all utterly alone.

Wilson doesn’t know how to climb. He barely knows how to fly. But he has the right plane, the right equipment, and a deep yearning to achieve his goal. In 1933, he takes off from London in a Gipsy Moth biplane with his course set for the highest mountain on earth. Wilson’s 11-month journey to Everest is wild: full of twists, turns, and daring. Eventually, in disguise, he sneaks into Tibet. His icy ordeal is just beginning.

Wilson is one of the Great War’s heroes, but also one of its victims. His hometown of Bradford in northern England is ripped apart by the fighting. So is his family. He barely survives the war himself. Wilson returns from the conflict unable to cope with the sadness that engulfs him. He begins a years-long trek around the world, burning through marriages and relationships, leaving damaged lives in his wake. When he finally returns to England, nearly a decade after he first left, he finds himself falling in love once more - this time with his best friend’s wife - before depression overcomes him again.

He emerges from his funk with a crystalline ambition. He wants to be the first man to stand on top of the world. Wilson believes that Everest can redeem him.

This is the tale of an adventurer unlike any you have ever encountered: complex, driven, wry, haunted, and fully alive. He is a man written out of the history books - dismissed as an eccentric, and gossiped about because of rumors of his transvestism. The Moth and the Mountain restores Maurice Wilson to his rightful place in the annals of Everest and tells an unforgettable story about the power of the human spirit in the face of adversity.

What listeners say about The Moth and the Mountain

Certainly a worthwhile listen. Remarkable man, great story, well researched, written and narrated. Too much detail and background history at some points, but never dull.

Marriage between Quixote and Melquiadis

Great story full of courage, romanticism, and mystery. Wilson is such an character that he inherited both Don Quixote's courage and Melquiadis kind of enchantment.

Unfortunately, we will never know the whole story of this man. The Crux of the story is based solely on personal diaries of Wilson who by the authors own admission tended to embellish his feats on occasion.

this is very misleading as most of it is wwone

very disappointing as i was expecting a book on an attempt on Everest but most was long drawn out history of wwone. . unless one wants a book on wwone pass on this book