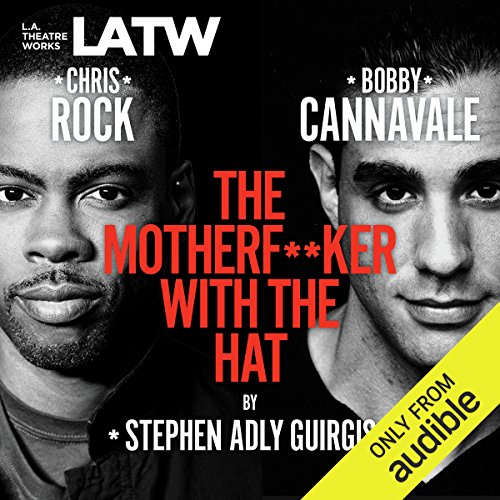 The Motherf--ker with the Hat

Addiction, pain, and explosive tempers are not exactly what you’d call the ingredients for a side-splitting comedy. Yet Steven Adly Guiguis has created a profane, hilarious masterpiece that earned a "hatful" of theatrical accolades in 2011, including a Drama Desk award for Outstanding Actor in a Play for Bobby Cannavale. Stars the original Broadway cast: Chris Rock, Bobby Canavale, Annabella Sciorra, Elizabeth Rodriguez and Yul Vazquez.

Directed by Jace Alexander. Recorded by L.A. Theatre Works before a live audience.

What listeners say about The Motherf--ker with the Hat

this was unexpected. I really enjoyed it. If you are not sure about what book to listen to this is a good one.

it was funny and on point and quick but otherwise nothing outstanding. I know it's ironic but there didn't need to be that much swearing

Listening to this play felt like watching a movie. I have liked Bobby Cannavale in everything I have ever seen him appear in, but his passionate performance in The Motherf--ker with the Hat cemented him as a top tier actor in my mind.

The story of Jackie, a deeply flawed ex-con who seems to subconsciously sabotage every good thing in his life, was interesting throughout. Tons of drama, humor, and some thought provoking morality questions made this Audible play extremely enjoyable.

Very well performed and short, gripping story! Seems crude but the crudeness is underlined by a story of pursuit of the American Dream.

You’d have a hard time finding a better collection of performances than this. This is contemporary theatre at its very best!

Just what I needed!

I desperately wanted to see this play when it came to Broadway, but was not able to make it to NYC. It was awesome to be able to hear this rendition, which is just like being in the audience. I was finally able to answer the question as to who is the m#thafu*$a with the hat!

Next Best Thing to Live

I wanted to see this show in person but couldn't. Listening was the next best thing! Absolutely brilliant performances!

At some point in my mid 40s I realized I actually still like both bedtime stories and performance narratives. In combination with great actors, realistic characters, and fairly good humor this story has become a favorite. It is for mature audiences which I appreciate and the vulgarity reminds me of my community. If you’re interested in dainty or classical theater you may want to pass on this one, but if you like grit and edgy storylines about everyday MFs prepare for a listen so fun you may find yourself “fiending” for more.

Third listening is the best so far.