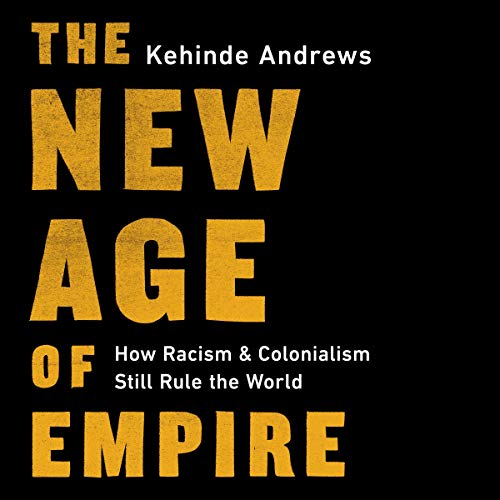 The New Age of Empire

A damning exploration of the many ways in which the effects and logic of anti-Black colonialism continue to inform our modern world.

Colonialism and imperialism are often thought to be distant memories, whether they're glorified in Britain's collective nostalgia or taught as a sin of the past in history classes. This idea is bolstered by the emergence of India, China, Argentina, and other non-Western nations as leading world powers. Multiculturalism, immigration, and globalization have led traditionalists to fear that the West is in decline and that white people are rapidly being left behind; progressives and reactionaries alike espouse the belief that we live in a post-racial society.

But imperialism, as Kehinde Andrews argues, is alive and well. It's just taken a new form: one in which the US and not Europe is at the center of Western dominion, and imperial power looks more like racial capitalism than the expansion of colonial holdings. The International Monetary Fund, World Bank, World Trade Organization, and even the United Nations are only some of these modern mechanisms of Western imperialism. Yet these imperialist logics and tactics are not limited to just the West or to white people, as in the neocolonial relationship between China and Africa. Diving deep into the concepts of racial capitalism and racial patriarchy, Andrews adds nuance and context to these often over-simplified narratives, challenging the right and the left in equal measure.

Andrews takes the listener from genocide to slavery to colonialism, deftly explaining the histories of these phenomena, how their justifications are linked, and how they continue to shape our world to this day. The New Age of Empire is a damning indictment of white-centered ideologies from Marxism to neoliberalism, and a reminder that our histories are never really over.

What listeners say about The New Age of Empire

This was a very wonderful read, I 100 percent agree with this.

I have always known that there has been an odd imbalance in society, given I grew up in the marginalized underdeveloped world.

The book is a broader reality to the truth I once knew. It gives detailed insights on how western imperialism and Racism still rule the world today. Would highly recommend all young black folks to read this book!

Being a young African myself, in the generation z train, These insights have doubled my wits and increased my desire for change, I believe in the revolution that Mr. Kehinde addressed, and although this may bring discomfort to the beneficiaries of this imperial system, it is a much needed revolt, as the lack of humanitarianism and death is tragic and needs to be reformed.

The purpose of colonies. Why African counties have not advanced even with freedom from colonial rule. Why the US has had a long history or involving itself in the rule of African, Latin American, and Middle Eastern counties. What “neoliberalism” is. What’s really happening in the US now.

Woooowww. This analysis blew my mind. This is a must read for those seriously interested in the progression of true liberty.

Probably the most insightful book since…

Historian, Kehinde Andrews “The New Age of Empire” is a groundbreaking historical book that gives deep insights on non white-washed world history, western colonialism, neo-colonialism and imperialism.
Each chapter is filled with so much knowledge. It’s the most informational book I’ve read since Dambisa Moyo’s “Dead Aid” and Walter Rodney’s “How Europe underdeveloped Africa”.

In a world where white supremacy isn’t the order of the day, this book along with the others I listed will be required in every middle/high school and even universities across Africa, Europe and the United States.

I look for forward to Mr. Andrews future works.

I really liked this book. I heard the author speak at a debate once and found him quite sharp and the book didn't disappoint one bit. Kehinde writes well, (narrates just as well), and is perhaps brutally honest, but I found that both highly informative and likely striking the right tone. Well worth the time to read and think about.

This book is essential reading for anyone who is engaged in global economic development, whether through business or foreign aid initiatives. Good intentions are not enough!

Book provides good view on neoracist world view and conspiracy theory where everything bad happening the world is due to Whiteness. No alternative explanations are needed and even suggesting one is considered racist. Helps to understand ideology that makes activists so angry, but does not really go further in actually providing real solutions.