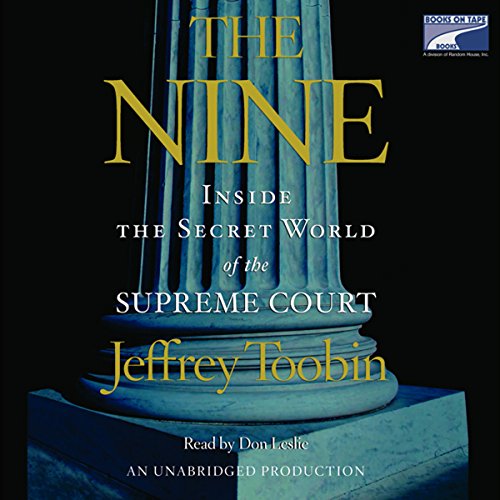 Written by: Jeffrey Toobin
Narrated by: Don Leslie
Try for $0.00

Best-selling author Jeffrey Toobin takes you into the chambers of the Supreme Court and reveals the complex dynamic among the nine people who decide the law of the land. Just in time for the 2008 presidential election - where the future of the Court will be at stake - Toobin reveals an institution at a moment of transition, when decades of conservative disgust with the Court have finally produced a conservative majority, with major changes in store on such issues as abortion, civil rights, presidential power, and church-state relations.

Based on exclusive interviews with the justices themselves, The Nine tells the story of the Court through personalities - from Anthony Kennedy’s overwhelming sense of self-importance to Clarence Thomas’s well-tended grievances against his critics to David Souter’s odd 19th century lifestyle. There is also, for the first time, the full behind-the-scenes story of Bush v. Gore - and Sandra Day O’Connor’s fateful breach with George W. Bush, the president she helped place in office.

The Nine is the book Toobin was born to write. He is a best-selling author, a CNN senior legal analyst, and New Yorker staff writer. No one is more superbly qualified to profile the nine justices.

"This is a remarkable, riveting book. So great are Toobin's narrative skills that both the justices and their inner world are brought vividly to life." (Doris Kearns Goodwin)

What listeners say about The Nine

Well, as advertised "The Nine" is in fact exciting, even riveting and insightful, but what is not advertised is that the author's strong left wing bias is barely concealed. This is sad. The subject matter is of great importance, and the author obviously put a great deal of sweat into into its writing, but unfortunately, it was titled wrong. It would have better been titled "The Nine: A Leftist's View of the Supreme Court". If your leanings are left, you will love this book. If they are right, you will hate it. If, on the other hand you are apolitical as I am, and you read the book to learn more about this major institution of the american government system, you will be saddened and disappointed, bucause the schloarship cannot be trusted.

This book is about the Supreme Court Justices - not the law. I found this to be a fascinating look into the individual nature of the justices and how their background, personalities, public and public opinion influence their decisions. The book covers many of the more well known cases regarding afirmative action, abortion, death penalty, gay rights, women's right etc. However, the focus is not on the cases but rather how the decisions were made. Insight into why the Chief Justice is so important, how 'liberals' judges like David Souter got nominated by a republican president. Why did the justices intervene in the Gore-Bush election? Which justice cried after the decision? What did the justices think of the Clarence Thomas confirmaion hearings? How did the presidents actually go about choosing a justice? How in the world did Harrier Myers get nominated? These any more topics are covered. if you have any interest in the Supreme Court, you will find this an interesting read (listent).

The Nine is written as a travelogue of the recent to not so recent history of this esteemed panel. It has many interesting facts and anecdotes concerning an 'inside baseball' perspective of the court. The average listener to this type of book however is probably more interested in a more academic approach to the subject. It is not that this title is not enjoyable, much to the contrary, I was quite engaged all the way through...It's just that when I got to the end I wasn't sure that I understood the court any better than I had before listening. What I was hoping for was how the cases were presented to the Justices and how they interpreted the Constitution in their findings. Fortunately Audible has actual Supreme Court hearings downloadable for free...This I found more informative, if a bit less entertaining.

Although the book does have its interesting moments -- some factual, some gossipy -- it more reminded me of my law school days (now more than 25 years ago) of listening to a student "briefing a case" to the professor and class. That was uninteresting. What's more, the book makes an argument that a pervasive right wing conspiracy is afoot in the the selection of Justices to overturn Roe v. Wade and other cases of perceived judicial activism. That could be, but I felt the arguments as presented were either weak, unsupported, or did not add up. I thought Woodward's "The Brethren" was far better. This book was quite underwhelming.

An excellent and scary view of what has happened to the courts of this country, most especially the supreme court in the past several years under the current administration. We should all be concerned for our future and the future of our children and grandchildren as our rights and freedoms continue to diminish and even taken away by fear tactics and puritanical views being forced upon us all. Toobin does and excellent job of showing us the ultimate force the supreme court holds in this country.

Shame on me for thinking we would get an insightful inside view of the Supreme Court. Wasn't expecting a piece of crap along the lines of Franken, Coulter, Limbaugh, and Marr. At least with those folks, you can discount it accordingly and are at least slightly amused during parts of the book. Seems like he had a great opportunity to provide an inside view of Supreme Court interplay. Sadly, that opportunity was squandered. Is this really what our country is now about? A bunch of hateful political hacks? Posing as journalists?

5 stars for leftys, 4 for others

If you are interested in politics and the court, this book is pretty darn interesting. Toobin is quite liberal, and writes from that point of view. As long as you can accept that, he writes a good tale, and you learn a lot about what drives the justices, albeit from his very left-leaning view of piety.

My biggest complaint is the author's omissions of important parts of arguments, for example, the whole Bush v Gore election. He totally glosses over the strident incompetence of the Florida Supreme Court. Only if you were a news junky at the time would you have the proper context to understand the whole story. He leaves out many details that don't comport with his liberal views; but, I guess we all do that some. Overall, very good book.

This was an excellent book with loads of information. The major problem I have is that it's not really organized very well. I was happy to see that the politics were kept largely to the side...though it's clear the writer doesn't like the Right.
The book slightly touches on Alito and Robert's appointments, but spends more time on the previous nine. This book is full of Supreme Court history and lore, but the author struggled with perspectives. The perspective of precedents in the court's history or the perspective of the judges and their appointments.
I would get this book again if I had too...even if it were a few hours longer, I enjoyed it that much. I would recommend it as reading before next year's primaries.

Jeffrey Toobin sure flat knows how to reveal what the court is really like. In his fine book, "The Nine," the listener comes to know about each high court judge warts and all. Sharp character sketches and descriptions of how the judges work individually and together are great.

Toobin, it seems, has set out to help us understand how the court works from the perspective of those a part of it. He succeeds wonderfully in this task. His portraits of the individual judges extends over a 15 year period allowing for him to introduce key decisions made over that period.

This book is well written and read. It tells how the individual judges work and interact rather than telling how the court works, per se. Therefore, the book will be of broader interest. Listen to it for what it is and you'll not be disappointed.

I'm disappointed. When I want to hear biased political views I can turn on the TV News. There is good information in the book but it would be far more captivating if Tobin left his own political views and adjectives out of it.

Because he starts off so very politically biased, the listener is left to wondering how much of the information he presents is actual fact.

My objection is with the very beginning - probably about the first hour. Tobin's basic characterizations of the various judges along with the political parties is unfair and almost caused me to turn it off and rank it as total political drivel. As Tobin moves on to the more personal side of each judge, it's more difficult to sort what is just his political opinion versus accurate depictions.