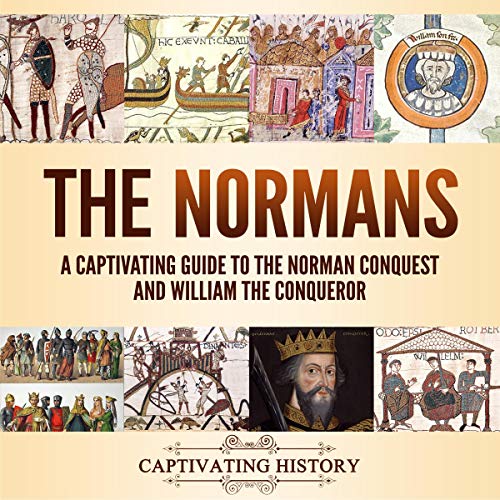 Written by: Captivating History
Narrated by: Colin Fluxman
Try for $0.00

If you want to discover the captivating history of the Norman Conquest and William the Conqueror, then pay attention...

Two captivating manuscripts in one audiobook:

Here are just some of the topics covered in part one of this audiobook:

Here are just some of the topics covered in part two of this audiobook:

So, if you want to learn more about the Norman Conquest and William the Conqueror, then listen to this audiobook now!

What listeners say about The Normans

Right along with the audiobook for William the Conqueror, this was absolutely fabulous to listen to. Highly recommend!!

I found this audio production to be very enjoyable and informative. The narrator was easy to listen and understand. The information has been well researched and arranged in an easy way to follow. The story is well organized to give a background to why events unfolded the way they did in history. Since this is an audio rendering of a book it follows that the information can be read if desired.

English history is rich with interaction of cultures so the English people have inherited characteristics of many different cultural backgrounds. The Danes, Anglo-Saxon, Romans, Viking, Norwegians and Normans all left their mark on the culture and the language of England making it one of the richest and diverse countries in Europe. William the Conqueror came to England because of a claim on the throne of England after the death of King Edward.

William the Conqueror was a unique man with skills and experience to unify an empire. He was able to bring all of England under his rule by what we would call harsh means but managed to rule over Normandy and England as his empire. He instituted a system of taxation based on wealth and took an inventory of all property in the kingdom and recorded it in what was called the Doomsday Book. Many of the changes William made have been passed down through later Kings.

This is a high quality production and well worth the time to listen. It is an amazing way to learn and to pass time while driving. It would have been a great tool to use in the classroom when I was teaching history but it wasn't around then. I highly recommend this audio book series to anyone interested in history and in learning about European development. It is well worth the time and investment.

i enjoyed hearing about the people and events that led up to the invasion by William the Conqueror. I would definitely love to read more about the history of Britain, though.

2nd book that was included, was actually about William, and I've already read that one.

the narrator telling these stories got a bit better in my head, as my 1st introduction to him seemed a bit droll. the 2nd time around had a slightly better flow.

This audiobook was amazing. I loved that the reader wan't monotoned. I have always loved the Normans and this audiobook gives a very deep look into William the Conqueror's early life, his conquest of England, and the circumstances in England that led to his invasion. I would totally recommend listening to this audiobook.

This is two different books that work well paired together. The details of the Norman conquest give a great perspective and context for the Norman invasion of England. Much of the first book does concentrate on England the various lines of succession both from within England and from other lines from the Danes and Norwegians and Normans and how all that played into William deciding to invade.

The Battle of Hastings is given vivid detail and was enhanced by information drawn from both the Bayeux Tapestry (Norman) and Anglo Saxon Chronicles. Another very interesting part was the Doomsday Books and how they came to be and where the name is derived from.

The book on William the Conqueror (among many names) starts out attempting to clear up is other moniker, William the Bastard, may have been latter-day propaganda and explains his actual situation in Normandy before 1066. It was very interesting to learn so many other aspects of this complicated ruler both before and after the famous battle.

this was a really interesting book. I had to take notes to keep some of the facts straight. I thoroughly enjoyed learning about the battle of Hastings. the entire book was excellent, I would give more than 5 stars but that is the most I can give