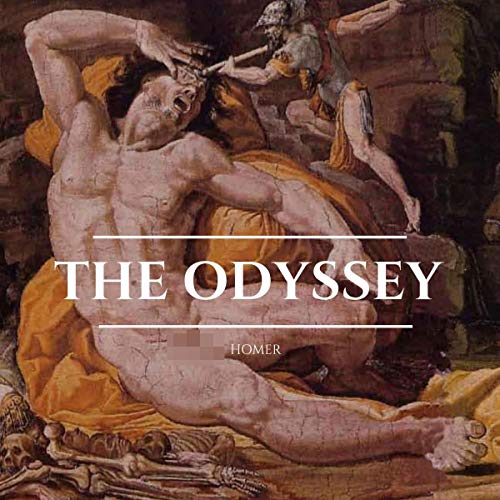 Written by: Homer
Narrated by: Charles Purkey
Try for $0.00

Odysseus has been away from Ithaca, the Greek city-state under his rule, for ten years while fighting in the Trojan War. After the fall of Troy, Odysseus begins the long journey home to his wife and son; however, his journey is plagued by misfortune as the gods feud over his fate, leaving the Ithacans to believe that he has died.

In the myths and legends that are retold here, Fagles has captured the energy and poetry of Homer's original in a bold, contemporary idiom, and given us an Odyssey to read aloud, to savor, and to treasure for its sheer lyrical mastery.

What listeners say about The Odyssey

It's hard to imagine a worse narrator.

This narrator is unbearable. I can't believe a professional narrator would have such terrible cadence, inflection, and comprehension. He reads without passion, let alone interest or skill, his voice itself and confident southern accent are unremarkable. He is not thinking about the story as he reads, it's like he is dissociated and is the worst kind of boring.

He does not take into consideration the story or read ahead in his mind, helping the listener follow along and understand what is going on. (and this is coming from someone who is interested and aquainted with the story). I can't imagine how bad this would be for a novice or highschooler. This is particularly important for this type of literature.

He is just reading words, not a story.

I'm bummed because I was looking forward to this new translation, and don't have time to sit down with a book.
I understand there's big concepts and words here, but come on. He sounds like someone reading but not comprehending it themselves. It's like when a teacher or preacher calls randomly on someone in the pews to read aloud. If you look up the definition of "droning on and on", you are given this atrocity. I feel like I'm listening my 10 year old. I recently listened to the new novel Circe which was fantastic story and performance. At least it was only . 66 cents. no wonder.

The narrator, Charles Purkey, is anything but perky. There is no feeling, no enthusiasm no excitement. He reminds me of someone stand up next to his desk in fifth grade and having to site read a book. I do not recommend! Such a great story wasted by the narrator.

The Narrator is a big turn off

For a world literature masterpiece, the narrator has underscored its weight. He sounds like a robot. Not passion. No emotion. No comprehension. I couldn’t bare to finish listening to him. I had to repurchase the version ready but Sir Ian McKellen. Difference of night and day! It’s a shame!

For the story, not the narration

There must be versions that you would want to savor as the ancients must have in the hearing. This is not that version. The narration has nothing to recommend it. Something between wooden and robotic with the occasional mispronunciation thrown in for good eye-rolling chuckles. But I needed to speed through the book—philistine that I am— and that I was able to do.