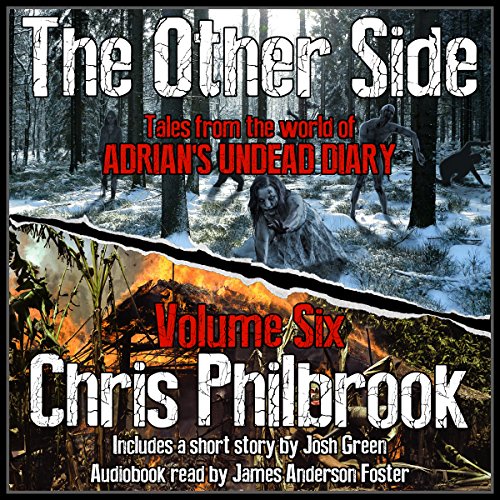 Adrian Ring is in a coma. Shot by a traitor in his midst, he has slipped into an existence where his consciousness is neither alive nor dead. He has gone to the other side.

Bolstered by the presence of the friends he has lost since "that day", Adrian embarks on exploring this frozen landscape of dreams and nightmares.

Gilbert and Gavin bring him to caches of supplies, locations of potential friends and enemies, and perhaps most of all...they bring him to their own pasts. Transported through time and space, Adrian sees a hunting trip firsthand with Gavin and then relives one of Gilbert's worst firefights during his Vietnam era.

Then, he sees something that hasn't happened yet, but will. And what he sees will change the world forever.

Welcome to the other side.

The Other Side also contains the third and final part of "Meanwhile in Utah", by AUD collaborator Josh Green.

What listeners say about The Other Side

The Other Side- Excellence in Short Stories!

"The Other Side", (Volume 6 of Tales from the World of AUD) is yet, another excellent edition of several short stories, each providing helpful insights and information regarding the direction the AUD series is heading. It is nice having supplemental short stories, as they have provided answers to many peripheral questions, popping up here and there as I have listened to the whole (one right after the other) AUD series.

Book #10 is available to read at this time, however, I am holding out for it to come out on audible, as I enjoy listening to books in this genre much more. I find audio makes for better graphic visualization in my mind. On that note, hopefully audible will make book #10 available sooner rather than later. :)

Finally, I found it pretty cool to make a connection with the last story in "The Other Side" to one of my all time favorite novels: Stephen King's,"The Stand." The correlation between the survivors in the AUD series and the survivors in "The Stand" is compelling. In "The Stand," the band of survivors is also fighting against a supernatural evil, and attempting to get to the "good" or "God" for help and guidance to fight this "evil." This was found when they finally found Mother Abigail, an African American older adult. All along the way, during this dangerous quest to reaching her, many in this band fell, becoming victims', after giving into the devil's (as represented in character Randal Flagg) forked tongued promises, their endings came with payment in the highest of prices. Either sell your soul to the devil (Randall Flagg) or suffer a physically and mentally torturous death for refusal or betrayal.

An diabolical attempt to end Adrian's life was made by the evil forces which want him dead. This was accomplished through the temptation of a member from his own trusted group, and was a person whom he understandably thought was loyal, and sadly, this false presumption cost him dearly. The "promises" the evil forces that be made to this man, almost cost the group their leader, and more disturbingly, the loss of Adrian would almost definitely mean no hope for the future of mankind.

I cannot get enough of AUD, and am sending many, many thanks to author/creator Mr. Chris Philbrook, Collaborator Mr, Josh Green and Narrator Mr. James Anderson Foster for this (yet, another) incredible supplement to the AUD series. "Tales form the World of AUD" is a a remarkable addition to AUD, and I hope there will be many more to go along with the continuation of the phenomenal AUD series! Also LOVE the anthologies! #Keep 'em coming!

I am usually not a big fan of short stories, but I really enjoyed this and as always the narration was spot on

Philbrook does it again!

This book is a must for any Aud Fan! I missed Gilbert and i am so glade to hear from him again even if its from the other side!

A glimpse into others lives in the AUD world!

This book did not disappoint. Book contained more stories of peoples lives in the AUD world. I was pleasantly surprised by Brandons story. Remember the zombie stuck in the swing. I am looking forward to hearing more about Spencer and the others.

One of my Favorites!

Adrian's Undead Diary and the Tales from the world of Adrian's Undead Diaries are some of my favorite Zombie Apocalypse series. I started reading AUD when it was just a blog on the old Kindle and absolutely fell in love with the series and the characters!

Happy Endins in the world of zombie's?

Another great peice to world of Adrian's world. I thank the author for his efforts. The performance was again wonderfully done. Stories were in line with the level of detail expected and appreciated.

I want to have chris Philbrook's illlegitament love child and raise him/her with James Anderson Foster.