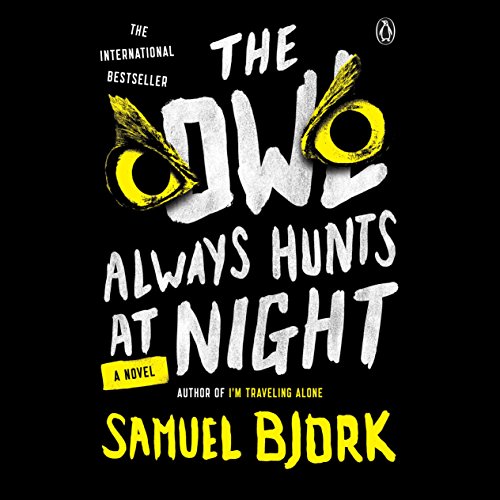 The Owl Always Hunts at Night

Written by: Samuel Bjork
Narrated by: Laura Paton
Try for $0.00

When a troubled teenager disappears from an orphanage and is found murdered, her body arranged on a bed of feathers, veteran investigator Holger Munch and his team are called into the case. Star investigator Mia Kruger, on temporary leave while she continues to struggle with her own demons, jumps back on the team and dives headfirst into this case - just in time to decode the clues in a disturbing video of the victim before she was killed, being held prisoner like an animal in a cage.

Meanwhile, Munch's daughter, Miriam, meets an enticing stranger at a party - a passionate animal rights activist who begins to draw her into his world and away from her family.

Munch, Kruger, and the team must hunt down the killer before he can strike again in this sophisticated, intricately plotted psychological thriller by the newest phenomenon in international crime fiction.

“Expertly paced and thoughtfully plotted, The Owl Always Hunts at Night will leave you shaken to your core.” (Bustle)

"The tension and stakes increase exponentially over the course of this meticulously plotted tale.... Bjork’s character work is excellent and imbues the story with nuance and heft." (Publisher's Weekly)

What listeners say about The Owl Always Hunts at Night

Short review. This was very weird, and I liked it. Good character development, a wild mystery, and heck of a shocking pre-ending. Not a cliffhanger, thankfully, but it did end with another potential mystery, or at least, a weird occurrence, presenting itself. I just ordered book 3 and can't wait

I’m not sure if my revulsion for this writing comes from the original, the translation, or the narration, but I found myself screaming at the simple mindedness of the characters. Munch and Mia and many of the other characters with M names never seemed to be able to understand even the most basic clear statements or questions! “Your daughter has been kidnapped!” “What!??? I don’t understand what you’re saying!” “The murderer is stabbing your grand daughter!” “What!? But I just saw my grand daughter last night!” And so on. The exclamation “what?!” (or whatever the original word was) must be the most frequently uttered word in Norwegian since no characters ever seem to understand anything when uttered the first time. The author also tends to use the stubbornness and stupidity of his main characters (Mia and Munch) to create tension. Just as someone with essential information is rushing in to solve the case Munch will head to bed or run for a smoke or wave them off because he’s on to something, forcing the reader to scream “take the effing phone Holger!”
It doesn’t reflect well on the Norwegian identity to have these incompetent idiots represent the best and most brilliant investigators in the country, but at least they have fjords and excellent health care.
The story was decent though, if not mildly overly elaborate. If there are loose ends, I probably won’t find out until I can read it in the original.

Continuing with the same likable, main characters from I am traveling alone, this novel is well written, fast paced and intriguing. The narration is quite good and the voiceover artist manages to entertain with different voices and credible accents.

Although this is part of a series, it can be read alone because enough of the last book is repeated for context. I tire of books where the main characters home lives become part of the mystery (and this is too common so I deal) but rest of this book is good enough to overlook that detail. The book is riddled with complicated characters and twists. The mystery unfolds, almost solving itself instead of through some master mind detective work, and when it starts it's impossible to put down.

Munch and Krüger or Abbot and Costello?

It’s not even an exaggeration, nearly every single question asked in this book (even if the person being asked was paying attention) is met with, “What?” “Huh?” To the point that it began drive me crazy. The filler of the repeated questions, whats and huhs, the debating on answering calls, the repeated calls, and all the whats and huhs that followed account for probably 3 hours of this total runtime. Without it this would be a so-so short story. I had high expectations for Munch and Krüger after the first book, and this follow up shattered all my hopes of loving another detective duo. This was painful. Their personal stuff went from building the character to becoming an annoying distraction. “I’m Traveling Alone” would be a stand out movie. This is nothing but a straight to DVD bargain bin job. Really hope the third installment brings them back to form. But after this I don’t know if my patience is ready to risk it quite yet.

It was exciting at the end.

I kept wanting to stop all the time but I stopped myself, until finally I got into it and did not want to stop. I had guessed what might happen but still it was very exciting at the end. Now I am so into it that I might read the others.

Hope all his books don't follow the same route

The problem with series books is when they start to repeat. I loved book 1, and I loved Mia. But I don't want to keep going down the same hole with her. She needs to progress. I hope his next book shows that like many other in this genre.

Not as good as I am Traveling Alone

Liked the book but it wasn't nearly as good as his first in the series. Left me figuring that the ending was just an opening for the next.

I highly recommend this book. Bjorne is a very talented author and Paton is very gifted as well. Together they have made a very entertaining listen. As the story unfolds I was captivate and I stayed up all night to finish listening. The first book is good but I liked this book better. Make sure to read the first book, I'm Traveling Alone, first as the characters are developed very good and the second will make more since. The plot in both books are complex and told wonderfully. This story line is unique and the mood matches the cover perfectly. If you prefer the plot to be less imaginative then you might think this story is a little too weird, but I really think this book is now one of my favorites. The story is not very gory but gritty enough to satisfy if you like the darker side. The narration is fantastic, both female and male characters are handled well with a rich voice that is easy to listen to. Her tone, pitch and emotional expression is great. I can't say enough about her skill.

Good follow-up to the first book

If you could sum up The Owl Always Hunts at Night in three words, what would they be?

This is a good series, with complex characters, in a moody climate. Norway darkness.

It is not a happy ever after series, but realistic.

Have you listened to any of Laura Paton’s other performances before? How does this one compare?

She is very good, only listened to her in the first of this series, she never gets in the way of the story.

No, actually, it gets heavy at times.

Normally, I like a good mystery, thrillers are not my favorite but I do like this series.

Not as Good as Book 1

Really enjoyed book one, but found the detective duo getting annoying and less likable in this volume. And the fact that a major, serious, yet unrelated crime could involve the same people is ridiculous. I also want a series book to stand alone. No cliff hangers...Don't think Ill bother with book 3.

Nail biting conclusion to a twisty turny plot. Narration was excellent and many different points of view.