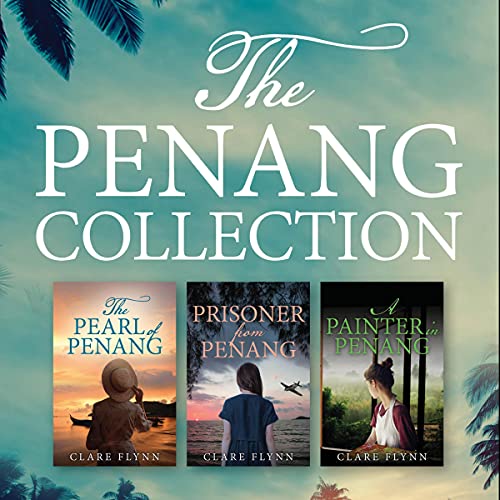 Written by: Clare Flynn
Narrated by: Victoria Riley
Try for $0.00

Set before, during, and after World War 2 on the beautiful Far Eastern island of Penang, these books and their memorable characters will keep you up all night listening.

The Pearl of Penang - Evie's Story

Winner of the 2020 BookBrunch Selfies award for Adult Fiction

In 1939, lonely and without prospects, Evie Fraser accepts a marriage proposal by post from a man she barely knows. Evie leaves her quiet English village for a new life on the exotic tropical island of Penang. Soon she finds herself pitched against her new husband on the one hand and the shallow spiteful world of the expatriate British on the other. Has she made a terrible life-changing mistake?

In late 1941, when the Japanese attack Penang, Mary Helston flees to the safe haven of Singapore, only for it to fall within weeks. Imprisoned by the Japanese on the nearby islands of Sumatra, Mary and her fellow women internees begin a desperate struggle for survival. But it's not only the Japanese and starvation that Mary is up against, as with her in the camp is the one woman Mary has good cause to loathe with a passion.

A Painter in Penang - Jasmine's Story

The war is over and Evie's unhappy step daughter, Jasmine, is desperate to return to the island of Penang where she grew up. When Mary, Evie's best friend, offers to host Jasmine, the 16-year-old is over the moon. As Jasmine settles into her new life, enjoying her painting, communist surgents begin the reign of terror that becomes the Malayan Emergency. Before long, Jasmine is drawn into a world of danger and secrets from the past that will force her to grow up faster than she had expected.

What listeners say about The Penang Collection