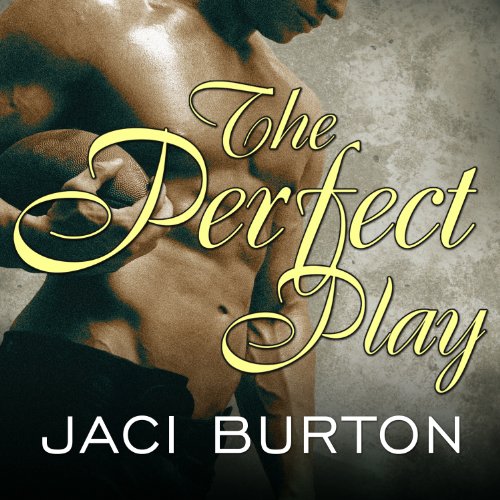 The last thing event planner Tara Lincoln needs is the jet-set lifestyle of a football pro like Mick Riley, even though their steamy and passionate one-night stand proved that Mick is an all-star - both on the field and in the bedroom.

Tara played the game of love once and lost big, and she doesn't intend to put herself out there again, especially with a certified heartbreaker. But when Mick sets his mind to win, nothing will stop him. And he has the perfect play in mind to catch this sultry vixen.

"In the hands of the talented Burton, the characters leap off the page and the romance sparkles as the sex sizzles." ( Romantic Times)

What listeners say about The Perfect Play

What did you love best about The Perfect Play?

Everything!!! I'm a girl who loves football, a great story and a hot, sizzling romance. This has it all.

You won't be disappointed. It's well worth your credit or purchase price. Caution explict sexual content.

Would you like a little story with that sex!

I had higher expectations.

This was an okay listen, but I had higher expectations given the reviews of the book itself. I don't know why but the female main character bothered me a lot. I understand the psychology of her actions and behaviors but it was almost more than I could handle. I will not be purchasing any more of this series.

I really enjoyed this audiobook. It's written in 3rd person and periodically switched from Mick and Tara's perspective. The sexual chemistry between Mick and Tara is pretty instant, and Mick moved into Tara's fantasy sphere right away. I mean of course he would fall within the fantasy category right away as a football star with drop-dead, good lucks and a charming personality. The issue is that Tara is a single mom, owns her own event coordinating business, and doesn't have time for a distraction as potent as Mick. Yet, when Mick pushes into her life, wanting more from her than a 1 night stand, well this book took on a rather fabulous turn.

In this book you get football, graphic, but sensitive sex scenes (I mean the sex scenes are thankfully NOT mechanical...they're pretty good), dirty talk during sex (boy, could these two talk dirty to one another!!!), and connecting with family along the way.

I really liked Mick. He was so patient with Tara and was understanding of her concerns. Tara was guarded, but with good reason. I thought her concerns were valid and she always looked after the well-being of her son first. Even though Mick and Tara don't hold back in the bedroom department, the question of whether their relationship can be long-term always hangs in the balance. The relationship was further tested by Liz, Mick's aggressive, lady agent. Now, regarding LIz, I had a problem with her. Right away I knew she was going to be the heroine in the next book simply by the way she was described as gorgeous, polished, having an incredible body, and overall described as a sex goddess each time she had a scene. OMG, it was nauseating...seriously. The descriptions for Liz were over-the-top!!! But, the problem is that Liz is a bitch and I'm really not interested in reading her story with Gavin, Mick's self-absorbed brother.

The main conflict in the book is resolved with some work on Mick's part. I thought Tara had good reason to be upset and to create distance. Yet, I have to say that even though their reunion was great, it was too rushed. All of a sudden, everything in their relationship came together, but way too squished in at the end. Maybe it's just that I'm a greedy reader, I wanted more Mick and Tara time when everything was perfect. If I read the second book, it will only be to get more of Mick and Tara, and tidbits of their HEA because unfortunately their romance did not feel complete.

Nice amount of buildup, great chemistry, totally realistic, in short it was a good one! The steamy scenes were plentiful and full of steam, and the relationship didn't go from I met you to I love you in three days...which always agrivates me. These characters worked to get together and there were highs and lows and I can't wait to listen to book 2.

So...why wasn't it 5 stars? Well, it was nice and fluffy and a fun listen, but I am reserving 5 stars for books that are impossible to put down. This one sucked you in from the beginning but it wasn't all consuming. It was worth the credit!

This was a great book. It's a great start to the series. It really made me want to see what happens to other characters in their books.

Tara is a single mother of a 14 yr old son. She's very protective and tends to push guys away to concentrate on her son and her business doing event planning. During an event she put together for the football team she meets Mick. They hit it off and she spends the night with him but then she tries to run off the next morning. Mick wasn't satisfied letting things stop there and searches her out.

Mick is just awesome...he's made some mistakes in the past but is a great guy. He's never been in a real relationship but when he meets Tara he can't not see her again. He has to get past some stiff resistance from Tara to get trusted enough to meet her son and be in her life but he did his best to be a good part of their lives and a good influence on her son, Nathan.

To be perfectly honest I wanted to give this book 5 stars but Tara but a bit too afraid for me to feel comfortable going 5 stars. She jumps to the wrong conclusion and pushes Mick away on multiple occasions and overall it's because she's scared. I understand that but she hurt herself, Mick and her son in the mean time while she was being scared and miserable. On the good side, after her son has a serious talk with her, she does come to her senses and does apologize to Mick.

This was a great book. It made me want to run right out and read the next book immediately. The only reason I haven't bought it yet is that it's about Liz and Gavin and Liz was a total b*tch in this bookso I almost hate to read her story because then I might regret Gavin getting with her or, worse yet, I might ends up liking her... But I think the draw it too great and I'll be breaking down and buy it anyways because I'm sure Jaci will do a good job with it. I saw the next book is available for pre-order on Audible...I hear the pre-order button calling me...

The Perfect Play was just great and I enjoyed it a lot. I will be reading it (listening to it) again and would recommend it. :D

I've had this book in my library FOREVER, and I may have purchased it solely for that smoking hot cover! Great cover or not, the story was really good. Single successful business woman and mom, meets a hot stud muffin of a football star and, oh yeah, he's ready for love, has a great family, loves her child and is great in bed.... I couldn't ask for much more.

I really enjoyed this story. I enjoyed the characters and the relationship between all the characters. Tara's love and protective relationship regarding her son was realistic to me. The chemistry and sex between Tara and Mick were heart warming. I would re-read this book and recommend it to others.

I think this is most women's fantasy!!

Would you listen to The Perfect Play again? Why?

Um... YES!! I listened in almost one sitting!! I had to turn it off because I couldn't stay awake anymore :) I didn't want to miss anything!

Being a mother myself, I can put myself in Tarah's shoes. Her son means everything to her and she wars with herself about being completely devoted to him or to allow herself happiness for the first time in her life.

What does Lucy Malone bring to the story that you wouldn’t experience if you just read the book?

Lucy told an amazing story! You know who she is at every point, there is no confusion about who is speaking. I just got lost in the story, not in trying to figure what she was doing right or wrong.

It did make me a little teary at several points.

Yes I would. It has good story and super steamy!

I love contemporary book series. This is my first book by Jaci and I will defiantly listen to the next in the series.

Mick picks up Tara son from the party after he is smashed and is truthful about his addiction issues.

I was moved by Tara's fierce concern for her son and how she did not want her son to be used by Mick or the team. I also liked how she was accepted by Mick's family.