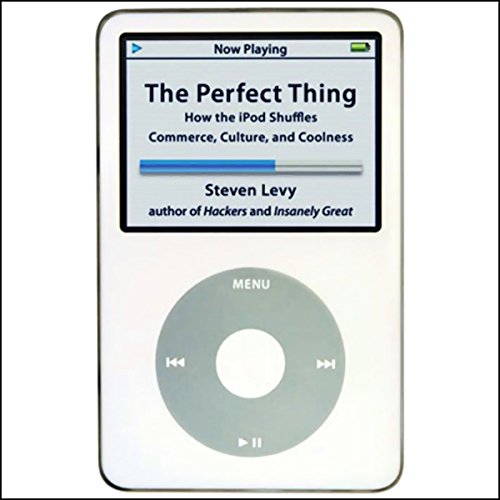 Written by: Steven Levy
Narrated by: Anthony Rapp
Try for $0.00

On October 23, 2001, Apple Computer, a company known for its chic, cutting-edge technology, if not necessarily for its dominant market share, launched a product with an enticing promise: you can carry an entire music collection in your pocket. It was called the iPod. What happened next exceeded the company's wildest dreams. Over 50 million people have inserted the device's distinctive white buds into their ears, and the iPod has become a global obsession. The Perfect Thing is the definitive account, from design and marketing to startling impact, of Apple's iPod, the signature device of our young century.

Besides being one of the most successful consumer products in decades, the iPod has changed our behavior and even our society. It has transformed Apple from a computer company into a consumer-electronics giant. It has remolded the music business, altering not only the means of distribution but even the ways in which people enjoy and think about music. Its ubiquity and its universally acknowledged coolness have made it a symbol for the digital age itself, with commentators remarking on "the iPod generation". Now the iPod is beginning to transform the broadcast industry, too, as podcasting becomes a way to access radio and television programming. Meanwhile, millions of "Podheads" obsess about their gizmo, reveling in the personal soundtrack it offers them, basking in the social cachet it offers, and even wondering whether the device itself has its own musical preferences.

Steven Levy, the chief technology correspondent for Newsweek magazine and a longtime Apple watcher, is the ideal writer to tell the iPod's tale. He has had access to all the key players in the iPod story, including Steve Jobs, Apple's charismatic cofounder and CEO, whom Levy has known for over 20 years.

What listeners say about The Perfect Thing

I enjoyed this audiobook. I knew it was a fluff piece and it didn't have character development, etc, but its a book about the iPod, so that's not what I was looking for. It was an interesting look at the making of the iPod and some very "fanboy" observances. As much as I enjoy my MP3 player (not an iPod, btw), it IS just another means to listen to my own audio collection, albeit a very cool one.

And agreeing with the previous reviewer, the chapter on shuffle-mode was quite a bit long in the tooth and really only worth a couple of minutes mention.

The quality of this audiobook's recording was substandard. The voice was "tinny" and not as clear as most other audiobooks, which is ironic as heck.

Overall, though, if you consider yourself a tech fan, I would recommend this book.

An Appreciation of the iPod

An enjoyable book, keeping in mind that this isn't a critical appraisal - it's more about the phenomenon of the iPod and its impact on culture and music consumption. I saw myself in the book - everything from the new enjoyment I derive from my music collection thanks to my library's portability and shuffle, to the physical connection I feel with my iPod, and now, my iPhone. I think Levy nicely captured the tactile enjoyment many people derive from their iPods. He also filled in a few gaps (for me, at least) in the iPod story.

This Book is a Blast

This book is hardly academic, but it has a lot of fascinating data. It rambles and I love the narration in the audible.com version. The narrator's delivery is awesome. It's also awesome that I was listening to the audible version of the book on ... of course ... my iPod.
I'm not a Mac-ophile. Unlike some of the comments in the book about the spiritual journey of the company Apple, I'm not really there. However, I really enjoyed the description of the how the iPod came to be. How the designers really wanted something "perfect" and kept pushing to create it. I love their obsession with minimalism. The focus on designing something to such a level that the design itself becomes virtually invisible -- that the functionality of the device is key.
The discussions about how the iPod has made people into Stepfords like the bad robot wife movie is hilarious. Anyone with a long commute knows the daily mindlessness and sense of complete lost time, even life from those lifeless, senseless minutes that seem to drain years from one's life. My iPod took the drear out, engaged my mind with audiobooks or at least let me feel like the time was valuable with foreign language vocabulary study.
I find this book odd for its obsession with music, since music is only one of many types of media one can consume on this device. One company, sadly gone out of business, created a set of Chinese character flashcards for the iPod, which I thought was awesome. I love Lumosity, so I was really stoked to hear they'd created Apps for the iPod, but when I went to the iTunes store, was sad to discover they are only for the iPod touch.
The pocket entertainment system has significantly reduced the pain of plane rides and unfortunately, I have endured too many transoceanic flights -- the worst is a half-globe flight with a wailing infant -- but the iPod adds a cottony distance between me and the child making sleep possible and taking the edge off the baby's high notes.
Honestly, I can't imagine life without this thing now. It improves my life in so many ways. I can consume audio books at a significantly higher rate than I was ever able to consume paperbooks. And I can carry them with me without exceeding airline luggage limits. I can change, according to brain fatigue from Chinese philosophy or Japanese language instruction to Judas Priest with the same swish and flick hero Harry uses to vanquish villains in Potter flicks.
Thanks to the Apple team and thanks to Steven Levy for this fun and frolicking history of the thing that modernized life.
I read on the internet that iPods have sold more than 300 million. In this book, Steven Levy notes that the walkman sold around 300 million. Is that right? Are they neck and neck for sales? Seems odd somehow.

Mildly entertaining, but too lightweight at times

This title reads more like a collection of magazine articles or essays than a solidly researched book. Given its source - Newsweek tech writer Steven Levy - that doesn't surprise. The sections that discussed the development of the iPod and the thinking of Apple's staff were interesting, but lengthy discussions of hip young people trying to out-cool each other with their music selection, or an inane chapter on whether the shuffle function is really random (of course it is!) bog down what could have been a much more in-depth look at an admittedly amazing product and cultural phenomenon.

not a book, it's a commercial!

Not one single character developed to relate to. Whats worse is no info either. He makes a hundred references to how "sexy", how "naked the beauty is". Tries to get you to believe it is the "drug of today". It is neither. Nothing helpful like, tips, shortcuts, fixes support, websites, NOTHING! The whole book is about how your playlist can make you cool. Dozons of obscure bands are mentioned.(with no sample sound of course.) Nothing about photos, or t.v. programs, The man does not even talk about the fact it playes videos or movies. One whole chapter wasted on, if the "shuffle is random or not! Yes it is. In his perfection rant, he doesn't wish to talk about the high cost-crashes-cables that break in your hand-no support-$30.00 for a piece of plastic accessory-downloads of inconsistent quality and volumn-you buy it and they think they still own it, dictating exactly what you may or may not do. We can go on. Bottom line, the artist sets the mood, and delivers the emotions, not the i-pod. It's a high teck tape recorder, thats all. The positive item is the author has a great vocabulary and a good writer. In the end no info was exchanged, i learned almost nothing,and it was a waste of time and money.