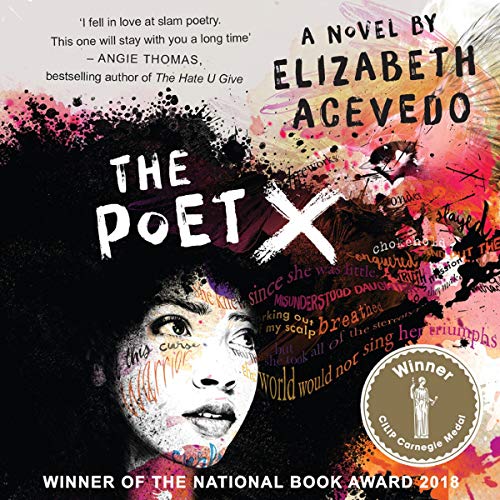 Winner of the Cilip Carnegie Medal 2019

The Winner of the 2018 National Book Award

The Winner of the Michael L. Printz Award

The Winner of the Pura Belpré Award

The Winner of the Boston Globe-Hornbook Award

A stunning New York Times best seller with a powerful and unforgettable YA voice. Perfect for fans of Tomi Adeyemi's The Children of Blood and Bone, Angie Thomas' The Hate U Give and Sarah Crossan's One.

Xiomara has always kept her words to herself. When it comes to standing her ground in her Harlem neighbourhood, she lets her fists and her fierceness do the talking.

But X has secrets: her feelings for a boy in her bio class and the notebook full of poems that she keeps under her bed. And a slam poetry club that will pull those secrets into the spotlight.

Because in spite of a world that might not want to hear her, Xiomara refuses to stay silent.

A novel about finding your voice and standing up for what you believe in, no matter how hard it is to say. Brave, bold and beautifully written - dealing with issues of race, feminism and faith.

Elizabeth Acevedo was born and raised in New York City, and her poetry is infused with Dominican bolero and her beloved city’s tough grit. The Poet X is her debut novel and a National Book Award winner. With more than 12 years of performance experience, Acevedo has been a featured performer on BET and Mun2, as well as delivered several TED Talks. She has performed internationally, and her poetry has been featured in Cosmopolitan, The Huffington Post and Teen Vogue. Acevedo is a National Slam Champion, Beltway Grand Slam Champion, and the 2016 Women of the World Poetry Slam representative for Washington, DC, where she lives and works.

"I fell in love at slam poetry. This one will stay with you a long time." (Angie Thomas, best-selling author of The Hate U Give)

"This was the type of book where 'I'll just do 50 pages' turned into finishing it in two reads. I felt very emotional, not just because the story and the words themselves were so beautiful but because I knew it was going to make so many teens who felt like no one cares about them or listens to them feel seen." (Tomi Adeyemi, best-selling author of The Children of Blood and Bone)

"Crackles with energy and snaps with authenticity and voice." (Justina Ireland, author of Dread Nation)

Featured Article: The Ultimate Audiobook Gift Guide for Everyone on Your Holiday List

Take the stress out of holiday shopping by giving the gift of audiobooks. Audiobooks don’t weigh down your tote bag, you don’t need to spend hours in the bookshop, and there’s no need for a bookmark! You can treat a book lover to an Audible membership or give them a perfectly picked new book that is ready for your listening pleasure. On each book's page, select the give as a gift option.

What listeners say about The Poet X

I had no idea what this book would be like, but I can’t imagine never hearing it. Amazing!

I don’t normally read poetry and I would have chosen this book if it hadn’t been recommended to me. I’m so glad I tried it. A wonderful new voice and style that I’m not familiar with. I looked at a few pages if the written book and I think I might have struggled with it, but having it read by the author was just amazing and really made me feel what she was conveying.

My daughter had to read this for school and I’m so glad I decided to listen...so powerful, so thoughtful...really feels poetic in the reading and the author was the perfect reader.

Grateful that this novel yielded such great discussions with my daughter. Really worth the too short listen!

To me this was a great read for 2020. I purchased this book based on a review of a booktuber and I must say that I am so glad I did. The author kept me engaged the entire book. I was able to listen to the whole book while completing other task. Definitely a good read and I can't wait to embark on more of this amazing writer work