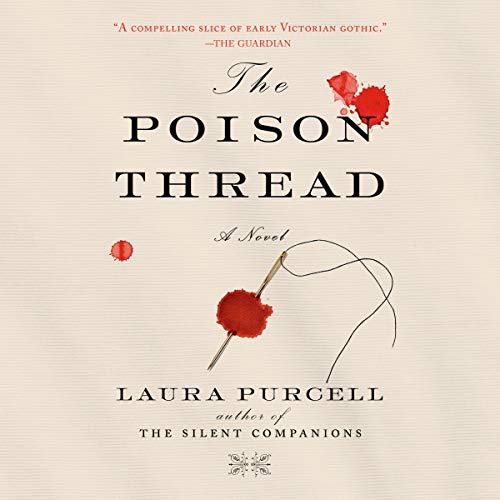 "A romping read with a deliciously dark conceit at its center... Reminded me of Alias Grace." (Kiran Millwood Hargrave, author of The Deathless Girls)

From the author of The Silent Companions, a thrilling Victorian gothic horror story about a young seamstress who claims her needle and thread have the power to kill

When Dorothea's charitable work brings her to Oakgate Prison, she is delighted by the chance to explore her fascination with phrenology and test her hypothesis that the shape of a person's skull can cast a light on their darkest crimes. But when she meets one of the prisoners, the teenaged seamstress Ruth, she is faced with another strange idea: that it is possible to kill with a needle and thread - because Ruth attributes her crimes to a supernatural power inherent in her stitches.

The story Ruth has to tell of her deadly creations - of bitterness and betrayal, of death and dresses - will shake Dorothea's belief in rationality, and the power of redemption. Can Ruth be trusted? Is she mad, or a murderer? For fans of Shirley Jackson, The Poison Thread is a spine-tingling, sinister listen about the evil that lurks behind the facade of innocence.

"A potent, powerful novel: seductive, spellbinding, and - in every sense of the word - haunting. As atmospheric as Sarah Waters, as psychologically astute as Tana French." (A.J. Finn, number one New York Times best-selling author)

“[The Poison Thread is] a compelling slice of early Victorian gothic.... Vivid and well researched, this book is an evocative portrait of a society that punishes women who dare to contravene social norms...a splendid mystery with suitably melodramatic flourishes.” (The Guardian)

What listeners say about The Poison Thread

So unsettling, so beautiful.

I chose this book because I wanted to just hear Jayne Entwistle. I am so glad I did. The book is deeply unsettling. There is an overwhelming Gothic feel, the characters are beautifully layered. Above all, the book manages to show genuine compassion for all the characters. It’s an unusually well written book. And you can never go wrong with Jayne Entwistle’s voice. She is magic.

Advertised as a gothic horror, it was... not. A lot of graphic scenes of abuse and gore, but not a lot of suspense or horror. It wasn't bad, but the ending fell flat for me.

Overall this was an engaging listen although I will say that every main twist that was revealed was foreshadowed so clearly that I knew way before the reveal. Nonetheless the story kept me interested because you wonder how long the two main characters will be in the dark and what the consequences will be. And the story is story of the interesting women trying to find s but if freedom to choose their life path in an era when both upper n lower class women had very limited options. This book especially doesn’t spare the horrors of being a poor female child in this era however. Some of the descriptions of abuse I found difficult to listen to ( I’m also someone who is in her sixth decade and still covers my eyes for gory scenes in movies and tv too). But I didn’t feel any of that was done just for impact it ws an essential part of the story.

This book makes the top 5 audible books for me! Great story, terrific narration especially Jayne Entwistle as Ruth. Such a unique story. I’ll be looking for my next Laura Purcell book

Wow! Excellent story, excellent narrators. I could not put this one down. Great book club or beach listen.

This is my second Laura Purcell book, and I think I have a new author to add to my top 5 favorites. I listened to this right after finishing The Silent Companions, which was a fantastic book and left me hungry for more gothic horror of this quality. I was surprised that I wound up being even more impressed with The Poison Thread. The book is achingly well-written and the performances for Ruth and Dorothea are top-notch. Ruth especially came vividly alive for me and my heart felt for her every moment. There were times when Ruth's performance was so powerful I had to turn off the book and wait until I wasn't driving/at my desk/etc. and could afford to be fully absorbed in her emotions. The story itself will keep you entranced and guessing right up until the last sentence. Some of the scenes were hard to listen to because of how disturbing they were, but there was nothing superfluous or simply there for shock effect, I felt. Everything was essential to the whole of the tale. I would love so much to see this adapted as a film. If you're a fan of Victorian Gothic stories or psychological thrillers, do not miss this one!!

Blew away my expectations

I'm not going to lie, the beginning is slow. I was thinking that I had yet again run into another drawn out book with no purpose. I almost returned it. However the more the mystery unfolded, the more intrigued I became. I got more and more curious to see where this story was going. The voice actors are great and convey emotions very well. If you decide to read it, give it a few chapters. There's are a lot of very unexpected twists and turns to be had and the ending will leave you breathless.

Oh, I loved this dark, atmospheric tale ! Tragic, yes, heartbreaking definetely, but it pulled me into the despair and squaller of the lives of the poor in 19th century England. There are some pretty horrific sequences in the narrative, so this may not be a story for sensitive souls. Jayne Entwistle was perfection as Ruth; Elizabeth Knowlton was a bit too whispery as Dorothea.

Loved the performance & story but, what happened on the last page? I don’t want to mess it up for others but, am I just dense or did others not get the meaning of the handkerchief in Dads hand?

It was hard to put this book down. Ruth and Dorothea are excellent characters and I really liked the progression of each. Laura Purcell had me think I knew what was really going on but at the end I questioned everything. I would recommend this to anyone with a strong stomach and for a love of morbid drama.

If you are looking for a great book to listen to then look no further! l loved every minute and hard a hard time tearing myself away from it. Seriously well written and great audio performance.

More from this author please!

This was a good listen! I listened to it within 24 hours! Please, Audible, provide more of Purcell’s books!