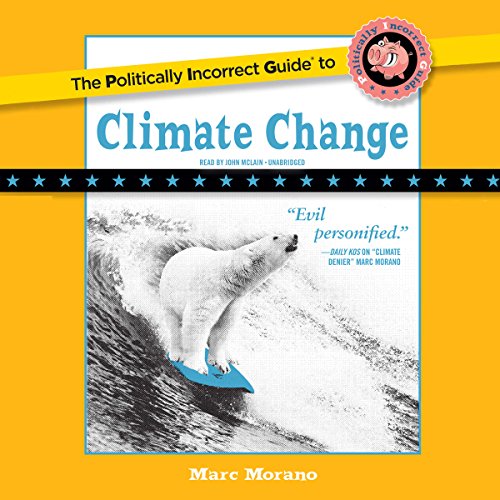 Written by: Marc Morano
Narrated by: John McLain
Try for $0.00

Less freedom. More regulation. Higher costs. Make no mistake: those are the surefire consequences of the modern global warming campaign waged by political and cultural elites, who have long ago abandoned fact-based science for dramatic fearmongering in order to push increased central planning.

The Politically Incorrect Guide to Climate Change gives a voice - backed by statistics, real-life stories, and incontrovertible evidence - to the millions of "deplorable" Americans skeptical about the multibillion dollar "climate change" complex, whose claims have time and time again been proven wrong.

What listeners say about The Politically Incorrect Guide to Climate Change

I only listened to this for 2 minutes and immediately couldn't even think about listening to any more of this book.

This book shouldn't be on audible at all mainly because it fills your head with facts claiming climate change Is a hoax. it's not. it's 2021, the planet is on fire, literally, we live in a year where world records temperatures are being set, hurricanes are worse than ever, droughts are killing livelihoods, and much of the world is actually on fire.

I enjoyed the references to published academic papers and the quotes from established academics. The reading was a little more emotionally emphatic than I prefer.

A bit of a zealot

I was looking for an unbiased evaluation of the science. I think was extremely biased— to the point that I don’t trust it. Performance was great. I hope to find other sources that are less biased.

Before listening to this I was on the fence as to what was happening with climate change agenda. But after listening to this and reviewing some of the statements and facts on my own during the book I found it very amazing the degree of shenanigans going on with this movement.

The book is well researched and referenced. The narration is flawless. After listening to this book, I have finally uncovered the frightening truth. I highly recommend this book to anyone interested in
understanding the workings of the climate change industry.

This should not be allowed on Audible.

Full of dog whistles and pseudoscience. I googled the author and the first thing that comes up is:

Marc Morano is a former Republican political aide who founded and runs the website ClimateDepot.com. ClimateDepot is a project of the Committee for a Constructive Tomorrow, a US non-profit organisation that promotes climate change denial.

So I looked up that group:

CFACT is a member organization of the Cooler Heads Coalition, which rejects climate science, is known to promote falsehoods about climate change and has been characterized as a leader in efforts to stop the government from addressing climate change.[15][16] CFACT chapters have protested in defense of oil exploration[17][failed verification] and in opposition to the Kyoto Protocol.[18][19] CFACT supports drilling for oil in the Arctic National Wildlife Refuge as well as hydraulic fracturing (fracking) in natural gas and oil-rich regions of the country.[20][21]

Use your head. Think for yourself. Follow the money trail. Don’t let this weird, passive aggressive propaganda get to you. The world is on fire whether you choose to acknowledge it or not.

If you are a dogmatic, humanity hating, radical environmentalist zealot, move along. On the other hand, if you care about nature AND humankind, are open minded and looking for an alternative viewpoint to the main stream climate alarmism orthodoxy, read on!

Not for the WOKE crowd.

Any view outside the alt-left is unreadable by the left as evidenced in the second review. The accepted view similar to the 1970’s when the scientists believed the world wouldn’t be able to sustain the population of the planet because it was cooling down! Better yet during the mini ice age that started in the 1300’s the enlightenment understood burning witches was the solution to global cooling, it took 60,000 witches burnt it turn the environment around then. Carbon is today’s witch and it’s not up for discussion…….. for the WOKE.
Great read if your open to it.

This is essential reading, context, and history for everyone who wants to understand the truth and challenges posed by Climate Industrial Complex of the eco-socialists.

Exposes the systematic deception and the huge money behind the mmulti billion dollar global warming industry.

I listened to be certain I understood both ends of the spectrum on climate change. Mostly, the main case against climate change in this book is that elite liberal politicians are using climate as a way to grow government and control our lives and their peasants, the greenie libs, are doing their grass roots work for them. The authors supporting facts are pretty circumstantial, twisted for his narrative, or just not true. That's my opinion, take it or leave it. The answer never lies at the far end of the spectrum of possibilities. This is definitely pushing towards one of those ends.

Monotone and light on facts

All I am looking for is scientific facts on WHY climate change is happening or not. All this book does is champion "global cooling wasn't a big deal therefore global warming isnt" and claim that climate scientists are all in on a conspiracy with no proof. Nowhere does it actually prove WHY carbon dioxide isn't a threat all I hear is "there is only 0.04% of it in our atmosphere therefore it can't affect the climate." It is drawing conclusions on false pretenses. Yet another bogus anti-climate heresay rant by an extremely dull, monotone narrator.

It was difficult to listen to the whole book. There are too many false claims, references to debunked conspiracies and inciting adjectives and adverbs resulting in overstating his position.

As seems true in most “debates”, if that’s what this is, that are true or close to it that a whole argument can be constructed on a kernel but result is a statement far off from the truth.

It’s no wonder real scientists are reluctant to waste time debating this journalist and political advisor over such a complex issue.

The other side of the story ...

After being "all in"' for years as a global warm warming and then a climate change believer, this is one eye opening read! I had just finished reading a dire account of what to expect as global climate change progresses It was pretty horrific and yet when I mentioned it to some people they seemed skeptical. This confounded me! So I thought it would be wise to hear what a climate denier had to say. The words shock and surprise best describe my overall sentiment as I listened to this book. My takeaway is that the concept of climate change may have started out as a science, but may now be more of a religion. Too many authorities on climate have withdrawn from the climate change side of the argument for lack of scientific evidence. This is a science that is evolving and one that I plan to watch closely.

Half of this book is Marc Morano trying to convince the reader how great he is. One quarter is lies. The rest is quotes taken out of context. If billions die due to climate change, he should be one of the first tried in a Nuremberg-like trial.

A must read for all.

Whether you are a supporter or skeptic this book is a must read to make informed opinions on climate change.

How can this book in these times even be promoted on audible! Makes me want to cancel my subscription. A Scandal!

Great facts to counter Climate Change activist argument. All the real truths that so many won't tell you.

A voice from the wilderness

The narrator for this book was very good. Easy to listen to and to follow.
The topic under discussion is one that I have found most of the time to be based on feelings rather than on the facts. However, with the evidence that was put forth in this book I now understand better this issue. Dates, publications, and meetings are given to show the deception that is being used in order to gain wealth and control.

The entire first chapter is a resume.

The style of writing is not compatible with an audiobook. I have always had the standard that if I give a poor review, I will finish the book. I could not finish this book though. Too dangerous. There is no story or plot. Just a list of unfocused lines. How anyone can think that making the first chapter a long list of personal accomplishments is beyond me.