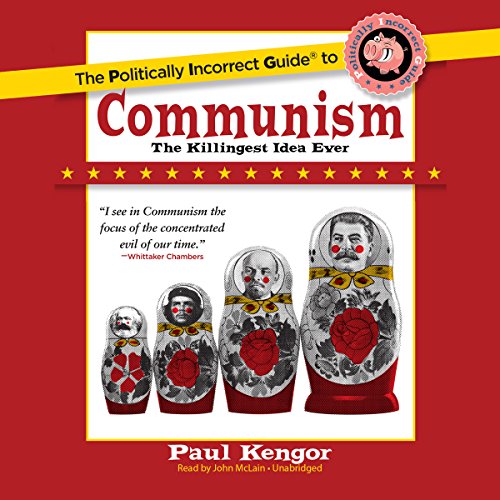 The Politically Incorrect Guide to Communism

The worst idea in history is back!

Communism has wrecked national economies, enslaved whole peoples, and killed more than a hundred million men and women. What's not to like?

Too many young Americans are supporting communism. Millennials prefer socialism to capitalism, and 25 percent have a positive view of Lenin. One in four Americans believe that George W. Bush killed more people than Joseph Stalin. And 69 percent of millennials would vote for a socialist for president.

They ought to know better. Communism is the most dangerous idea in world history, producing dire poverty, repression, and carnage wherever it has been tried. And no wonder - because communism flatly denies morality, human nature, and basic facts. But it's always going to be different this time.

Renowned scholar and best-selling author Paul Kengor unmasks communism, exposing its blood-drenched history and the strange sway it has long exercised over much of American media and education. He reveals:

The Politically Incorrect Guide to Communism debunks the world's worst ideology, sounds the alarm about its disturbing popular resurgence, and arms you with facts you need to refute its appeal.

What listeners say about The Politically Incorrect Guide to Communism

I believe every one should read this one. not reading it would be A CRIME AGENST THE REVOLUTION comrade.

Not sure the author even read what he is writing about and just crunches a lot of over simplifications together with right wing narratives.

The facts presented in this book are interpreted through an unapologetically conservative lens, I mean full on religious right, and at times it caused me to nearly stopped reading the book due to concerns about credibility.

** Why Read It **
If you are worried about a left leaning bias in academia how can you be sure to learn about communism without whitewashing? Read this book.

I also enjoyed its scope - it goes right into the 21st Century, here are some things I found interesting:

* If Marx was all about class struggle, why is the left all about race, gender and sexuality today?

* What about socialism? Is that any different to Communism?

** Note to Conservative Readers - Don't Demonise Atheists **
Being an atheist tells you NOTHING about someone's position on anything except belief in a god or gods. This includes communism, and many atheists are just as aghast at the appalling history of communism as you are. Atheists can be right wing libertarian, left wing progressive or centrist moderates concerned about all extremism. They can even be highly religious - e.g. some branches of Buddhism.

Lumping them all together is like lumping together everyone who doesn't believe in astrology - ridiculous.

What the heck is an "Obscene Atheist Museum" anyway? How would it differ from a museum to "not collecting stamps"? What would be in it? It makes no sense but Paul constantly throws these sorts of comments around, potentially alienating many who are otherwise sympathetic with his concerns about communism.

Should be required reading in High School

Easily one of the best books on Communism out there, if the intent is to introduce people who don't know anything about it. Young people are not taught this at all. This is why people like the young lunatic that just attacked innocent kids at a Florida High School wear communist shirts idolizing these lunatic terrorists from the past.
This is one of the those books that is sort of a "launching pad". The chapters allow you to start looking at other resources, other ideas, and you start to see how this has all been tied together in the last 100 years in this country.
The book attempts to explain how.. in a country so successful as the United States.. millions of young people could vote for an avowed Socialist (Bernie Sanders) who proudly displays a USSR flag in his office spaces.
When a sitting Senator from Vermont, puts up a USSR flag in his office, and you understand that that symbol represents a system that murdered more people than the Nazis.. by a factor of at least 3, maybe 4... it is an indicator that there is a serious problem in our education system with regards to the history of Communism.
Every single American who votes should read this book.

This book does a great job of exposing communism by covering many facets of the evil of the political system.

Must read for everyone

The Voice Kills It

The content is fine; it's the reader's voice that ruins the book for me. I'm not sure if it's his attitude or the tone of his voice but it just doesn't do it for me.

This book is hilarious, I'm so glad it was available in Audible plus and I didn't had to use a credit.

The reader did a phenomenal job. He was one of the main reason I was able to finish the book.

In conclusion, if you are a lefty and you fart and they don't like how it smells, you are a communist.

A must for everyone.

A must for everyone. A history and perspective necessary for the awareness of the threat to our Constitution, our liberty, and our way if life.

If you listen to this book, you will understand the gravity, of the relentless onslaught upon the halls of your mind. To be pushed to believe in something that destroys you, as a wonderful marvel of modern history. It will cause your blood to boil.

This is a great cliffs notes like book on Communism. It covers a lot of ground and is extremely helpful. The audiobook sounds like listening to a radio show/movie trailor, but it didn't deter me. Well worth every penny.