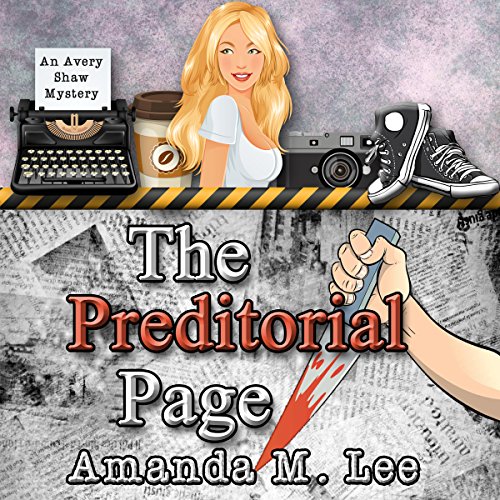 Is speed dating okay when you're in a relationship? It is when you're looking for a killer, especially in Avery Shaw's world.

A naked body has been discovered in the nearby Clinton River, and while Sheriff Jake Farrell is keeping his cards close to his vest, Avery has another avenue of information: Eliot.

It doesn't hurt that the medical examiner seems to have a crush on her - and verbal diarrhea - and she keeps stumbling upon information that propels her ahead of the pack.

Unfortunately for Avery, when she discovers information that no one else has - and she finds herself on top of the media game - she has to make a decision, and that decision is going to tick off everyone she knows.

Between Jake's anger, Eliot's worry, and Grandpa's insistence that you can't force a handicap parking space on a business owner, Avery has her hands full.

Lexie has a new place to live, Carly is adjusting to married life, and Avery is trying to convince the men in her life that she's not in danger, despite all evidence to the contrary.

In actuality, it's just a normal week for this hard-headed reporter, until someone's eye focuses in on Avery, and she finds herself in real danger, again.

Jake is angry, and Eliot is torn, but Avery has an idea on how to solve the case. The only problem is, when all is said and done, someone is going to be shot... and Avery is going to regret every move she's made on this case when it happens.

Who will survive to see another Avery Shaw catastrophe?

Another winner from Amanda M Lee

Love the attitude in this series! Avery continues to entertain with her antics and love trio. The story is fast paced and leaves you wanting more. Can't wait till the next instalment in Avery's life!

Preditorial Page A Must Listen

Amanda M Lee's Preditorial Page is a great work of fiction and Angel Clark brings it to life. The narration for this book is fantastic. You can lay back close your eyes and see all the characters come to life. If you are looking for a good book to listen to then you have found it.

Avery Shaw is at it again putting her life on the line for a story. I love the quirky characters and their sarcastic banter with one another. The story is well written and with the help of splendid narrator Angel Clark it just goes to the next level. I can't wait to get into the next book in this series. I highly recommend this book and series. This is my honest unbiased review.

Normal Mixed Up Week For Avery

Wonderful puns, a suspenseful story, and amusing characters made the fifth book a joy to listen to!

Angel Clark did an awesome job, yet again!

Would you listen to The Preditorial Page: Avery Shaw Mystery Book 5 again? Why?

I just couldn't get enough of this audiobook. Avery just can't keep from getting into trouble. Now we have a serial killer that likes blondes with blue eyes and Jake and her boyfriend are trying to keep her alive but almost gets Jake killed in the process. If only she would take orders that were good for her. You will love this. It's always fun to listen to the story and actually have people portray the characters. But even with a killer Avery is just as sarcastic as ever. You'll love it. Audio books gives you the opportunity to listen to it over and over.

Yes. You never knew what was going to happen. You just knew that wherever Avery was, the killer was going to be there.

I honestly don't know. She did a great job. I have a tendency to list to the story and the person portraying the characters but haven't really done a good job at finding who the portrayer is.

I actually laughed listening to Avery. I wouldn't say it was an extreme reaction but I did almost cry when Jake thought he was dying.

All of Amanda Lee's books are awesome. Whether it's the witches or Avery. You can't go wrong.