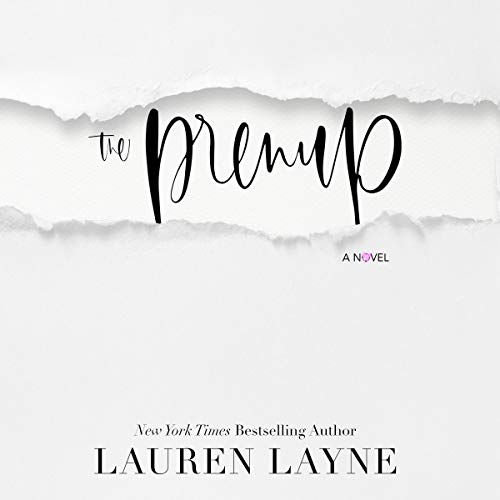 Written by: Lauren Layne
Narrated by: Brianna Cohen
Try for $0.00

Ten years ago, I married my brother’s best friend. I haven’t seen him since.

Charlotte Spencer grew up on the blue-blooded Upper East Side of Manhattan, but she never wanted the sit-still-look-pretty future her parents dictated for her. Enter Colin Walsh, her brother’s quiet, brooding, man-bun-sporting best friend, and with him, a chance to escape. He's far from Charlotte’s dream guy, but they need each other for one thing: marriage. One courthouse wedding later, Charlotte’s inheritance is hers to start a business in San Francisco, and Irish-born Colin has a green card.

Ten years later, Colin drops a bombshell: The terms of their prenup state that before either can file for divorce, they have to live under the same roof for three months.

Suddenly, this match made in practicality is about to take on whole new meaning....

What listeners say about The Prenup

It was an alright story but the MC's have zero chemistry together. after listening to the entire book i'm still not sure why this is a romance, they are clearly not suited to each other.
I could have done without the 5 epilogues. the narrator was descent but there was just something about her voice that didn't work with my image of the female lead.

I love this author!

The narrator is excellent . Wonderful story of love and mishaps and what we all dream of

Loved it! I appreciated how the romance was based on the development of friendship -- rather than bedroom scenes. This author proved she can write a strong story while keeping the bedroom door closed. Would love to see more stories with such strong character and relationship development.

I wasn’t expecting this to be as cute and fun at first. The narrator does a fantastic job and the story is very cute. It’s witty and the characters have a great chemistry. I can definitely see this become a movie one day, it’s definitely a favorite rom-com.

such a sweet story

such a sweet sweet story. A modern take on the marriage of convenience. I loved watching the two of them grow and open up to each other.

A great romance novel. Super sweet but not sappy. I was sorry to see it end.

loved it - especially the narrator. story line fun and realistic. loved it when she said ok grandpa when she is questioned about her pajamas and demand to wear a robe.

Lots of build up,really enjoyed- but the end would up without enough detail.- would like more from him at end.

There are great books that I won’t listen to if the performers are poor.
This book is an excellent read AND excellent audible.
I highly recommend both!

This was a very good book I like the narrator and the storyline was really sweet. I did have a problem with the skipping sometimes during the best parts it would skip and I would miss them. But other than that it was a good book light and easy to listen to.

Great story! I was incredibly impressed with the narrator. She did a great job with the Irish accent!

Very cute audio book
The narrator did a great job and the story was very cute.