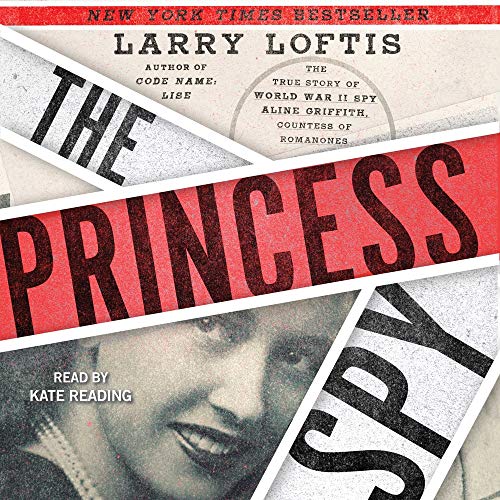 Written by: Larry Loftis
Narrated by: Kate Reading
Try for $0.00

“As exciting as any spy novel” (Daily News, New York), The Princess Spy follows the hidden history of an ordinary American girl who became one of the OSS’s most daring World War II spies before marrying into European nobility. Perfect for fans of A Woman of No Importance and Code Girls.

When Aline Griffith was born in a quiet suburban New York hamlet, no one had any idea that she would go on to live “a life of glamour and danger that Ingrid Bergman only played at in Notorious” (Time). As the United States enters the Second World War, the young college graduate is desperate to aid in the war effort, but no one is interested in a bright-eyed young woman whose only career experience is modeling clothes.

Aline’s life changes when, at a dinner party, she meets a man named Frank Ryan and reveals how desperately she wants to do her part for her country. Within a few weeks, he helps her join the Office of Strategic Services - forerunner of the CIA. With a code name and expert training under her belt, she is sent to Spain to be a coder, but is soon given the additional assignment of infiltrating the upper echelons of society, mingling with high-ranking officials, diplomats, and titled Europeans. Against this glamorous backdrop of galas and dinner parties, she recruits sub-agents and engages in deep-cover espionage.

Even after marrying the Count of Romanones, one of the wealthiest men in Spain, Aline secretly continues her covert activities, being given special assignments when abroad that would benefit from her impeccable pedigree and social connections.

“[A] meticulously researched, beautifully crafted work of nonfiction that reads like a James Bond thriller” (Bookreporter), The Princess Spy brings to vivid life the dazzling adventures of a spirited American woman who risked everything to serve her country.

What listeners say about The Princess Spy

I gave up 3 chapters into this book. When the author started rereading portions of her book The Spy wore red, I was so upset I returned the book. I had been looking forward for this books for months now. I first read, The Spy wore red in late 1990's
Then audio after 2010. Listen in her own words The Spy wore red, And The Well Mannered Assassin. Save your credit for those books

I enjoyed how this was written more like a narrative, but I would’ve liked more explanation on sources throughout the book. It’s definitely a super fascinating true story and had a great combo of romance and intrigue, especially for something non-fiction.

While well written, it just wasn’t a very interesting story. The spy stuff is extremely dull. What makes the subject of interest to some is that this low level spy was beautiful and mixed with the glitterati of Spain, Argentina and America. She partied with Eva Peron and Elizabeth Taylor. Dated famous bullfighters and hung out with Jackie O.

To give credit where it’s due, she DID volunteer for dangerous work and was willing to risk her life for her country. She should be admired for that. But her actual assignments never rise to any level of excitement.

The READER was awful! At regular speed, she sounds like she’s reading to someone who doesn’t speak good English and so is goooooinnnggg veeerrry slooowly to let them catch up.

If you are going to listen to this - speed it up to at least 1.3x speed or you’ll never finish it!

I read it because my neighbor’s book club was reading it, but I found it deadly dull.

An historical biography of a fascinating women

I listened to the story of Aline Griffith in her historical context twice. The historical side- stories, such as about the Generals’ Plot of 1938, are welcome, independent additions. The book portrays several brilliant and intriguing characters besides Aline. I found many photographic portraits of Aline online. She was beautiful and regal.

Enjoyed it even though I've read the spy wore red
anti communists book for sure.

This was a very disappoint read. Read The Spy
Wore Red. Better writing.
I am amazed this received high reviews. .

What a wonderful story about an intriguing lady! I highly recommend this book to history buffs and lovers of film, fashion and WWII.