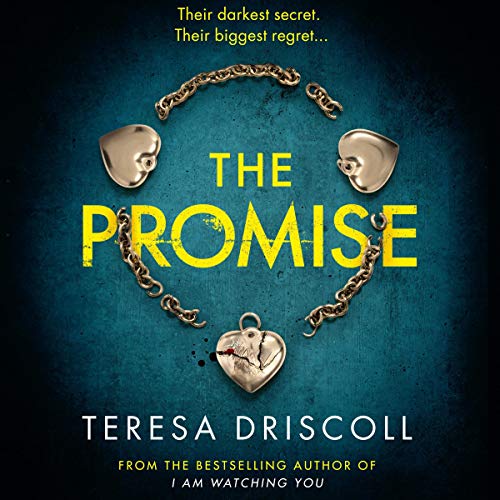 The chilling new psychological thriller from the #1 bestselling author of I Am Watching You.

It was their darkest secret. Three schoolgirls made a promise - to take the horrible truth of what they did to the grave.

Thirty years later, Beth and Sally have tried to put the trauma behind them. Though Carol has distanced herself from her former friends, the three are adamant that the truth must never come to light, even if the memory still haunts them.

But when some shocking news threatens to unearth their dark secret, Beth enlists the help of private investigator Matthew Hill to help her and Sally reconnect with estranged Carol ­- before the terrible act they committed as teenagers is revealed.

Beth wishes she could take back the vow they made.

But somebody is watching and will stop at nothing to ensure the secret stays buried. Now, with her beloved family in peril, can Beth still keep the promise?

“Gripping and well written with warm, realistic characters who will haunt you long after you’ve reached the dramatic end.” (Jane Corry, Sunday Times best-selling author of My Husband’s Wife)

What listeners say about The Promise

I liked the book, I think in terms of subject matter and the ability to grasp the issues and challenges of a person and the emotions that go with it, this was a very good listen with a very good narrator. However, there was an unnecessary dramatic build up to the secret promise. Honestly It could have been revealed early on and then the after effects played out through out the story. The flaw was in the writers’ thought process that the center of the book was a promise when it really was the development of the characters surrounding the effects of the promise. It was still a very good book.

Not what it claimed to be

The only suspense in this book was the waiting for the thrilling and exciting parts.

it sounds like it could be a good book.... but there are so many characters being introduced without any real foundation of knowing who they are.. changing from then to now from then to now timelines.... I feel like I walked into a conversation of people I barely know talking about people I never met about something that they're not cooling me in on.

The performance and narration was spot on. Very good! The story was a bit hard to follow at times and I had hard time with characters and following the back and forth. But worth the read/listen.

The Promise has a sad, but surprising twist that I hadn't even considered until it was revealed. Excellent novel!

I promise she gets to the story!

Whoa! This was extremely difficult for me to stick with. It finished okay but the first good half of the book lead up to this super, ultra, life altering promise among a group of girls. You have no clue why and aren't given much more than bread crumbs like Hansel and Gretel. It was grueling trying to piece together and it took too long to set the story. Once it began to roll it became interesting but not riveting and though the story did have some twists, I never was on the edge of my seat so to speak and much could be anticipated ahead of time. Myself, I would personally have picked another book given the chance knowing this information. Way too many other good books out there!

Really enjoyed this one and how it all came together. Several twists toward the end.

Not advisable for parents grieving loss of a child

I found the story captivating with many twists. I kept guessing wrong; a good thing. Although it was not upsetting for me, women or men who have lost a fetus or child may find this story further upsetting.

Thirty years later, Beth and Sally have tried to put the trauma behind them. Though Carol has distanced herself from her former friends, the three are adamant that the truth must never come to light, even if the memory still haunts them.

But when some shocking news threatens to unearth their dark secret, Beth enlists the help of private investigator Matthew Hill to help reconnect the friends with estranged Carol ­– before the terrible act they committed as teenagers is revealed.

But somebody is watching and will stop at nothing to ensure the secret stays buried.

Firstly I'd like to say that inside this book there are a lot of areas that involve mental illness. Discussing from eating disorders, alcoholism, depression, drug addiction, etc. I enjoy reading books that cover mental illness so thank you Teresa for sharing this with us.

I did however feel that the book was overloaded. There were many situations covering the entire novel and a good many story lines that I found it troubling to follow. It was difficult to keep track of who was dealing with what and it left me feeling some characters stories were being rushed due to everything ending so fast. Other than that, this was a good listen and had many interesting parts.

Good plot but a bit to slow for me.

Good plot but a bit to slow for me. I struggled a bit to keep picking up and finishing