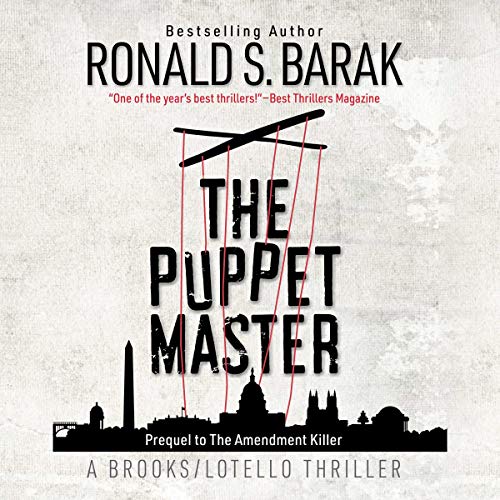 What would you do if they took everything you had, your family, your home, your business, your dignity, even - perhaps - your sanity? Ronald S. Barak's latest, The Puppet Master, prequel to The Amendment Killer and the second in the Brooks/Lotello Thriller series, is a gripping story of a political system gone awry - and those who feel compelled to fix it.

"Have you ever killed anyone? I have. I'll do it again. If I need to."

Three prominent political leaders in Washington, DC, murdered in as many days.

The Puppet Master begins with a bang. Literally. Three of them. Not a moment wasted. Capitol Hill panics. Who will be next? Others whisper that our political leaders are only getting what they deserve. Anxious to see who will be next. And why.

Crafty DC homicide Detective Frank Lotello is tasked to find the killer. Cliff Norman, a local businessman with ample motive, is arrested. Politicians breathe a sigh of relief. However, when Lotello discovers a disturbing White House connection, he suspects Norman may not be what he appears to be. Things may not be what they appear to be.

Norman's trial commences in the courtroom of savvy DC trial court judge Cyrus Brooks. An angry nation rallies behind Norman. The jury debates whether Norman's actions may be legally justified by a rampant abuse of political trust and threatens to unravel the very fabric of our dysfunctional government.

In an unprecedented and questionable manner that may destroy their respective careers, Lotello quietly approaches Brooks, and they form a secret alliance to uncover the truth in this classic whodunit mystery. Before it's too late.

Blurring fiction and reality, The Puppet Master will have you dangling from the first moment to the very last.

What listeners say about The Puppet Master

I am going to give this book to ratings. A 4 for the actual book because it was so long and wordy, pus so many characters it got overwhelming and hopped around. Now having said that... I listened to the audio and the narrator was amazing. he voice acted the ook ( which I love and each character even the females had a clear, unique voice. You could even tell when there were thoughts being voiced as happens a lot in Lotellos and Brooks' parts. That is skilled. So I give a 5 adding in the narration.
This is book two and marked a prequel. I have not read book one and do suggest this one first since we meet Brooks and Lotello'
First, we meet Lotello, a newly widowed police officer with two kids, contemplating if he should stay on the force and keep his career or find something else so he can spend more time with his family. Mr. Barak found an unusual way to endear us to Lotello by his speaking so much to his deceased wife. It really touched my heart and made me really like him.
There is a wide array of characters, too many to mention and all have a depth to them.
Te book kinda has two parts the police procedural than the political part. After the person is found and put on trial then we get in depth of the trial and that is where we meet Brooks, the judge, and the DA and prosecuting attorney as well.
The story is engaging, thrilling and page turning and I can't wait to see what the next book has in store. but I will choose the audio.
If you like crime thrillers, police procedurals, political procedurals, and allover page-turning suspense this is for you. I highly recommend the audio.