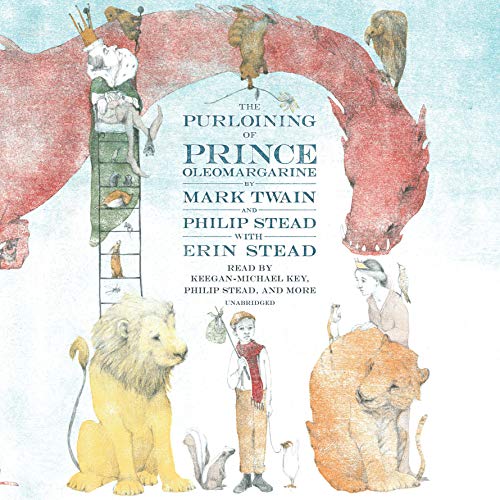 The Purloining of Prince Oleomargarine

In a hotel in Paris one evening in 1879, Mark Twain sat with his young daughters, who begged their father for a story. Choosing a picture from a magazine to get started, Twain began telling them the tale of Johnny, a poor boy in possession of some magical seeds, who finds himself on a quest to rescue a stolen prince. Later, Twain would jot down some rough notes about the story, but the tale was left unfinished...until now.

Plucked from the Mark Twain archives at the University of California, Berkeley, Twain's notes now form the foundation of a fairy tale picked up over a century later. With only Twain's fragmentary script and a story that stops partway as his guide, author Philip Stead has written a tale that imagines what might have been if Twain had fully realized this work.

This is a story that reaches through time and brings us the debut children's book of America's most legendary writer, envisioned by one of today's most important names in children's literature.

"Completing a story penned by arguably America's greatest author is no easy feat, but the Caldecott-winning author-illustrator (and husband-wife) team proves more than equal to the task.... A pensive and whimsical work that Twain would applaud." ( Kirkus)
"A cast of eccentric characters, celestially fine writing, and a crusade against pomp that doesn't sacrifice humor." ( Publishers Weekly)

What listeners say about The Purloining of Prince Oleomargarine

So enjoyed this! Laughed out loud at the witty humor of Twain. Keegan Michael Key is a joy to listen to and such a great comedic performer.

A delightful and whimsical story, well-performed!

This story is a delightful textile of whimsy and beauty mixed with realism and a sprinkle of dark humor. I was drawn in from the beginning, in part because of the fascinating story and style, and also because of the narration and moments of music in the story's white spaces.

Having the three narrators, especially as one is one of the actual authors, really fleshed out this story well and gave it more depth.

As soon as I finished this story the first time, I started it over; and since I had borrowed it from the library I looked it up on Audible because I knew I needed to keep this one.

Well done and thank you! I love it!

Loved the pictures in the kindle edition

I got the kindle edition and played it along with the audible. The narrators and the pictures made the story.