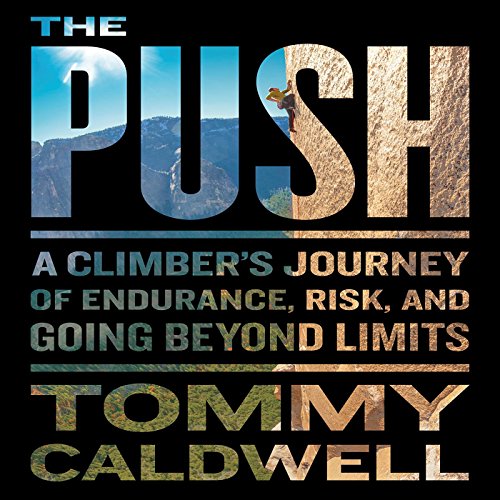 Written by: Tommy Caldwell
Narrated by: Johnathan McClain
Try for $0.00

“The rarest of adventure reads: It thrills with colorful details of courage and perseverance, but it enriches readers with an absolutely captivating glimpse into how a simple yet unwavering resolve can turn adversity into reward.” (The Denver Post)

A finalist for the Boardman Tasker Award for Mountain Literature

On January 14, 2015, Tommy Caldwell, along with his partner, Kevin Jorgeson, summited what is widely regarded as the hardest climb in history - Yosemite’s nearly vertical 3,000-foot Dawn Wall, after 19 days on the route. Caldwell’s odds-defying feat - the subject of the documentary film The Dawn Wall to be released nationwide in September - was the culmination of an entire lifetime of pushing himself to his limits as an athlete.

This engrossing memoir chronicles the journey of a boy with a fanatical mountain-guide father who was determined to instill toughness in his son to a teen whose obsessive nature drove him to the top of the sport-climbing circuit. Caldwell’s affinity for adventure then led him to the vertigo-inducing and little understood world of big wall free climbing. But his evolution as a climber was not without challenges; in his early 20s, he was held hostage by militants in a harrowing ordeal in the mountains of Kyrgyzstan. Soon after, he lost his left index finger in an accident. Later his wife, and main climbing partner, left him. Caldwell emerged from these hardships with a renewed sense of purpose and determination. He set his sights on free climbing El Capitan’s biggest, steepest, blankest face - the Dawn Wall. This epic assault took more than seven years, during which time Caldwell redefined the sport, found love again, and became a father.

The Push is an arresting story of focus, drive, motivation, endurance, and transformation, a book that will appeal to anyone seeking to overcome fear and doubt, cultivate perseverance, turn failure into growth, and find connection with family and with the natural world.

"If you want to be inspired by a great leader, if you want to feel what it takes to do what no one thought possible, if you want to be absorbed by a heroic journey - Tommy Caldwell's story is one of the best you could ever hope to find. Here, in his own words, you get more than just a climbing adventure, you get the inside view of how a person can endure crushing setbacks and persist to fulfill a spectacular vision. And in sharing his story, he has become a teacher to us all." (Jim Collins, author of Good to Great)

"The Push is the most insightful book about climbing I’ve ever read, and quite possibly the most enjoyable. Whether Caldwell is explaining his astounding feats on vertical terrain, or the agony of trying to sustain a doomed relationship, or the merits of what he calls ‘elective suffering', the writing is consistently captivating and unfailingly honest." (Jon Krakauer, author of Into Thin Air)

"Yes, Tommy Caldwell is a badass, but he is no different than you or I. I've always been interested in how people do the impossible. This isn't just a book about climbing, it's about laser sharp focus in all aspects of life. Tommy's story provides insight how we can all push a little further and a little higher." (Scott Jurek, author of Eat & Run)

What listeners say about The Push

Listened to it on my 10 hour drive. I didn’t want the drive to end so I could keep listening. Lots of really good insight into who Tommy is!

inspiring novel about adventure and adversity

a lifetime of experience packed into an short novel. can't imagine the mind set and perseverance it takes to accomplish what Tommy has. amazing.

If you are a climber, you will get more from this story. If not (I am not), the story becomes tedious and repetitious. I’m not sure what I was expecting. Perhaps a story that applied more to non climbers. His story of the two woman in his life also is rather predictable.

great book about an amazing feat of human grit

an amazing telling of one of the most athletic achievements in human history. Great for climbers and non climbers

Wow! You gotta read this one!

I loved it! As an avid climber I loved to hear about all his adventures and the places with the included rawness that he added to the story. Tommy Caldwell was so real and he didn't hold back from telling his story and it made it so personable.

Insightful & Moving, Climber or Not

Read The Push after watching the movie, and was not disappointed. Tommy Caldwell is a thoughtful writer, unafraid to share the struggles he dealt with during this nearly decade-long endeavor. A great insight into his experiences, both on and off the wall.

This could be the best climbing book I've ever read. Strikes a great balance between the climbing side of his life, his personal life, and what was going on in his head throughout both. It left me inspired to get out there and climb. #audible1

very interesting story of a world class climber. easy to follow. made the drive fly by

Climbers will love this book

I am a climber and I’ve looked up to Tommy Caldwell as a kind of role model since I first saw him in the movie Progression (2009). In that movie he was just starting the Dawn Wall project. This book is the long-awaited answer to the question: can it be climbed? Obviously, the answer is yes. But there’s more to it than that! He tells a story of fatherhood, love, and loss that is told from the point of view of someone with an admirable attitude on life. A stellar read!

I couldn't put it aside! This would probably be something for non climbers just as well too!

One of the best memoirs, period.

The book is painfully honest.

From all the reviews I read and heard, I expected nothing but honesty, but still it surprised me. To a genuine person, it is not too hard to honestly dissect the self and even be brutally critical of oneself. However, it takes a strong commitment to honesty to tell the truth about EVERYTHING, which includes other people involved. It takes courage not to gloss over details for fear of offending others, and it takes integrity to speak the truth regardless how that reflects on yourself or others around you.

For some readers out there, you might find the book sometimes painful to read -- that is, if you ever find yourself feeling hopelessly socially awkward and not knowing how to fit in and integrate, if you find yourself struggling to make sense of relationships be it with family, significant other, or even a climbing partner, if you have ever had the thought, no matter how brief and shameful, that walking off that diving board did not seem to be too horrible an idea, or if you have ever set a goal that seemed totally ridiculous and unrealistic ... you will identify yourself in the book. Now, who am I kidding. I am all of those "some readers" rolled into one. The fact that the book has a fairy tale ending -- everyone seems to have gotten what they wanted for life -- might just be the inspiration I need?

You, ya you!, could well be in a very good place in your life right now and cannot relate to any of that. Good for you! I don't know what kind of impact the book will have on you, but I suspect that the book has the power to touch some place deep in anyone's heart. That, is the power of raw honesty. Enjoy!

Best adventure, and maybe best autobiography I have read.

I was excited for this book, being familiar with Tommy's climbs and adventures. I've read countless similar books, and was geared up for another interesting, but somewhat superficial armchair adventure personal history. However, this book is instead one of the most thoughtful, introspective, and at times emotional personal stories I have read. Tommy has the ability to see the flaws and the grace in all the relationships around him in a mixture of love and honesty. The stories of his adventures are fun and descriptive, but also take pauses to discuss the thoughts, fears, and doubts in Tommy's mind at the time. He does an excellent job embodying his 15, 20, and 30 year old self so we can experience his growing up along side him. I am super impressed at this first book from Tommy- hopefully there are more to come!

This is such an amazing and insightful story. Tommy Caldwell tells it with amazing detail, transporting us into the joy, agony and beauty of the mountains. I will listen again for sure.

Wow, this was one of the best books I have read/listened to in a long time around the subject of perseverance and the will to make things happen.

I cannot recommend this book enough and am really looking forward to the movie they were filming whilst scaling the Dawn Wall. My feet and fingers would get tired just reading about the climbs.

Really well written and very honest without a lot of ego.

What a treat! Tommy is a phenomenal climber and actually a great writer!
Audio is great also.

If you climbed before or it you have not this is about pushing the limits far beyond the normal and the work it takes to make it possible.

Enjoyed many aspects of this book. Well written with plenty of detail and definitions for non climbers to enjoy.

Amazing autobiography! Experienced full range of emotions and left me more moto than my days in the military!

This book follows the life of Tommy Caldwell from his birth till his major achievement at Dawn Wall. Themes of family, climbing and life experiences created a fun listen.