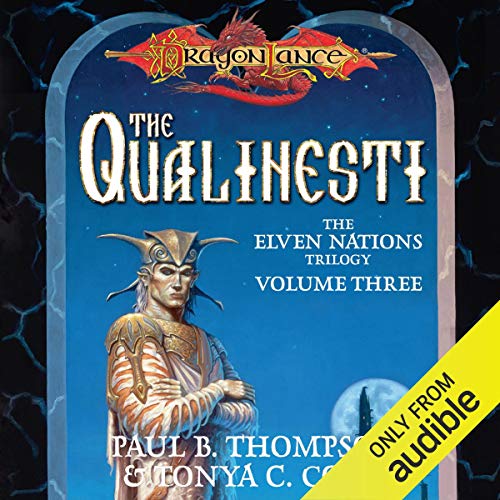 Written by: Paul B. Thompson,Tonya C. Cook
Narrated by: Steve Coulter
Try for $0.00

The Qualinesti, the third title in The Elven Nations trilogy, was first released in 1991, and it documented the ancient schism of the elven races in the Dragonlance world. Unavailable for the past several years, this title is now being brought back in order to fulfill the rising demands of consumers. The other two titles in this trilogy will also be re-released so that listeners may easily compile the entire trilogy.
©1991 TSR, Inc. c. 2004 Wizards of the Coast, Inc. (P)2013 Audible, Inc.
Historical Epic Action & Adventure
Show more Show less

What listeners say about The Qualinesti

A great conclusion to the trilogy. Unfortunately, nobody explain to Steve Coulter want a kender should sound like 😔 For me, it broke the magic of the moment.

This is my favourite “historical” dragonlance trilogy. It had its ups and downs, but ultimately left me wanting for more. After the bitter Kinslayer Wars a large group of elves, humans, and yes even dwarfs form a new country. Qualinesti. A place for peace and freedom. Soon however we find that all is not well in the newly formed kingdom.

this book ends the trilogy on a weird note and im.not aware of a pic up point to this particular storyline which I would like so it's the worst of the 3 but suited the needs of the story