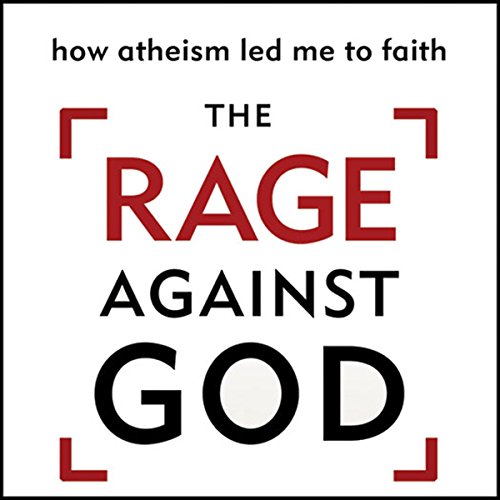 The Rage Against God

What if notorious atheist Christopher Hitchens, best-selling author of God Is Not Great, had a Christian brother? He does.

Peter Hitchens details a very personal story of how he left the faith but dramatically returned. And like many of the Old Testament saints whose personal lives were intertwined with the life of their nation, so Peter's story is also the story of modern England and its sad spiritual decline.

Peter brings his work as an international journalist to bear as he documents firsthand accounts of atheistic societies, specifically in Communist Russia, where he lived in Moscow during the collapse of the Soviet Union. He shows that the world's bloodiest century, the 20th, entailed nothing short of atheism's own version of the Crusades and the Inquisition. The path to a secular utopia, pursued by numerous modern tyrants, is truly paved with more violence than has been witnessed in any era in history.

Hitchens provides hope for all believers whose friends or family members have left Christianity or who are enchanted by the arguments of the anti-religious intellects of our age.

What listeners say about The Rage Against God

A Remarkable Combination of Narrative and Argument

This book is not a typical polemic against atheism. It is a combination of story and argument, and so frames the author's journey from atheism to Christianity in a way that is at times amusing, often disturbing, and at other times remarkably heartfelt, particularly for a Brit. Peter's accent may make it more difficult for some to undsrstand; I personally found it complementary to the emotional weight regarding his own personal experiences and the well-known schism between him and his more famous atheist brother. This book may not be for all, but it is one of the most enjoyable apologetic books I have read up to this point.

There is only one Peter Hitchens

I don't want to get into it. It's about him and his brother and the USSR. if you are a Peter Hitchens fan, you will like it.

This is not written by an atheist (which you might guess if you only base your assumptions on the title), but a Christian who probes the depths of atheist self delusions

Not at All What I Expected

Firstly, you cannot read this book without first reading Christopher Hitchens' book God Is Not Great. Simply stated, Peter Hitchens book is meant to be a rebuttal against what he calls his brothers atheist polemic. I think the book falls short of actually representing a comprehensive rebuttal but Hitchens writing is so well crafted and the circumstance of his relationship with Christopher so intriguing that I enjoyed the book nonetheless.

I expected a sort of "anti-atheist" book which put forward reasons to disbelieve atheist propositions, supplanting them with even more valid reasons to believe in the existence of God. Peter didn't do that, instead he spends the first half of the book on a completely fascinating nostalgic remembrance of Britain after WW2 during his early childhood, then goes on to catalog his experiences as a journalist in soviet Russia and anarchic Somalia as a way of demonstrating the effect of atheism when practiced as a matter of governance.

Still, Hitchens ultimately fails to rebut much of anything Christopher says in his book, or really anything Harris, Dennett, or Dawkins say either. About 2 hours into the book I was angry at Peter for sucking me in to something I didn't ask to hear but the book ultimately won me over and especially the epilogue, where Peter discusses his relationship as Christopher's brother with startling honesty. As the oldest of 2 male children, I can relate completely to Peters melancholy about the lifelong rift between him and his older brother. Read the book if you've got the money or a spare credit. Peter is a great writer and his book is quite fascinating. It just never achieves exactly what he said it would--but somehow that didn't detract from it being a wonderful 4 hours. If you're looking for an actual "anti-atheist" book I recommend searching Audible for What's So Great About Christianity by Dinesh D'Souza.

What did you love best about The Rage Against God?

Peter Hitchens eloquently articulates his personal observations of atheism as a foundational ideological preference of the totalitarian regime in communist Russia, and puts forward an analytical case for why the same abandonment of Christian principles in modern Europe should be cause for concern. The book is written with poetic brilliance and rational insight, it was an enthralling pleasure to listen to from start to finish.

Peter offers some unique perspectives on post-war British society, the mentality of the generation that grew up in the wake of the second World War, the contrast between a country that still has vestiges of moral grounding in a transcendent authority and that of a country and society which has long been isolated from such obligations, and intriguing insight into his relationship with his (now late) brother, one of the more salient intellectuals of the New Athiest literature, Christopher Hitchens.

Have you listened to any of Peter Hitchens’s other performances before? How does this one compare?

This is the first book by Peter I have listened too, and I am extremely glad he took it upon himself to be the voice of his own writings - he is very easy to listen to and speaks with authority and dexterity.

It absolutely was, and that's exactly what I did! Captivated from start to finish!

I really was not prepared for how much I would enjoy this book! I recommend it highly and can't wait to indulge in more of his writings.

Peter, of course, not Chris. A marvelously intelligent and personal counter to his brother's screed against the Christian Faith, Peter Hitchen's Rage Against God is perhaps one of the best apologetics for Christianity for our modern age.

I enjoyed Peter's book. Although I didn't agree with some of his opinions I found his writing to be honest and uncontrived. In my opinion he doesn't seem to try as hard to sound smart as does his brother Christopher.

I really enjoyed his reciting of the King James bible verses at the beginning of some of the chapters--I love the poetic sound of that particular version and they lend credibility to his understanding of the faith.

This book should be thought more of an autobiography than as a complete counter argument to the athiest "fad" of the moment and to me it was enjoyable as thus.

thought it was going to be better

What disappointed you about The Rage Against God?

The book was ramblings by the author. 'Rage against God' is a poor title, it should be babblings by Peter Hitchens. I got so tired of Mr. Hitchens wandering, I stopped listening.

Would you ever listen to anything by Peter Hitchens again?

Who would you have cast as narrator instead of Peter Hitchens?

I don't believe another narrator would fare any better.

Don't waste a credit on this book.

really enjoyed how Peter Hitchens talks about the history of his country the history of Russia and and the results of driving God from the public square. It is a case study that every atheist should look into before they call for the dismantling of the Christian faith. The other point is that an atheist should be more intellectually honest. Equating the God of the Christian narrative to the god of the Muslim narrative is just intellectually dishonest. into convenient. without the brutality in murdering nature of fundamental Muslims the atheist is left with deflated historical points that are very flimsy. I believe that Peter looks at this subject in the most honest and compelling way.

If you could sum up The Rage Against God in three words, what would they be?

This is not a typical work of apologetics; the author makes no such claims. It's part essay and part memoir. The biggest difference between the brothers is not talent (Peter is Christopher's equal as a prose stylist) or ultimately even politics (the agree on many issues, though often for different reasons)--it's self-criticism. Both brothers are devastating polemicists, but Peter is hardest of all on himself. This is a book about refusing easy answers and self-congratulation, written by a man of great integrity.

What does Peter Hitchens bring to the story that you wouldn’t experience if you just read the book?

Anyone who has watched PH in action on television knows that he has one of the great voices in the English speaking world. Belongs on the bridge of a battleship. And because he's reading his own story, he does so with great (if subtle) emotion.

Anyone is going to find the last chapter very powerful. I also loved the reflections on Peter's school days, and was unexpectedly fascinated by his discussion of Soviet atheism.

An overview of atheism without becoming technical

Peter Hitchens' "Rage against God" is not a book that make sparks fly. In a certain sense it is autobiographical, giving the reader glimpses on the live of Peter Hitchens the atheist and his journey to Christianity. Those who expect Peter to fully engage with his brother Christopher, might be disappointed. The book is more of a background sketch of where the rage against God came from and where it might be going to. I thought Peter was able to give a good balanced understanding of some of the general "absurdities" that the New Atheists may come up with, not only putting it in context, but also pointing the fallacy of some of their argument. This he does while being painfully aware of Christians shortcomings. In short this is an honest book, although I wondered if the quality of the reading by the author himself, couldn't have been better.

By far a better book than Christopher Hitchens God is not great or Dawkins God delusion. Peter delivers in clear and moving words his rebuttal of those volumes and explains how and why the new atheists are infused with the intolerant fury of revolution. An atheist most of my life, I found this a welcome antidote to the disgusting Dawkinsian drivel that has permeated so much of the atheist movement.

Although the subject is fascinating, this book failed to keep my interest. Ultimately I stopped listening. I was very disappointed that it wasn't better.